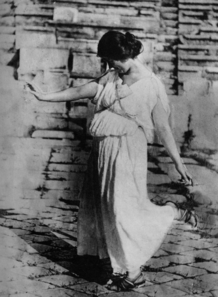 "I have discovered the dance. I have discovered the dance which has been lost for two-thousand years," Isadora Duncan declared as a child. Dubbed the "Mother of Modern Dance," Duncan was a pioneer of modern dance in Europe and North America, where her techniques are now equally or more prevalent than the ballet with which she once competed. In a time and place when dancing was reserved for the wealthy to either watch at a ballet or dance in a ballroom, Isadora Duncan took some of the first steps towards a disparate dance style that is now commonly taught and performed around the world. Modern dance is founded in physical freedom and artistic expression, contrasting with ballet’s uniformity and regulation. This freedom can be seen in the movements and in the dress of the dancers, which can look different for all dancers and choreographers in this discipline. When she first performed in public, spectators were perplexed by her barefoot, self-proclaimed religious dancing, but as her career progressed, audiences around the world celebrated her just as Duncan herself celebrated Aphrodite and Athena.

On May 26, 1877, Isadora Duncan was born to Mary Gray and Joseph Duncan in San Francisco, California. Soon after Duncan's birth, her father abandoned the family. She and her three siblings were then cared for solely by their mother, who worked as a piano teacher. Mary Gray encouraged a craving for art and independence in all of her children, and Isadora, the youngest of the four, inherited an immense passion for both.

At an extremely young age, Duncan was prompted by a family friend to take ballet lessons, but suppressive instructors and rigid standards immediately deterred her from pursuing the classical technique. When she was six years old, Duncan began teaching younger girls in her neighborhood to wave their arms, imitating the ebb and flow of the ocean. "We called it a new system of dancing, but in reality there was no system," Duncan wrote. She thought traditional ballet technique was stiff and unnatural, so she only taught movements that represented unrestrained beauty and emotion. As Duncan’s teaching became more popular, she was able to make money through this enterprise and dropped out of public school so that she had more time to teach. Meanwhile, she continued her intellectual pursuits at the public library under the supervision of poetess and librarian Ina Coolbrith. 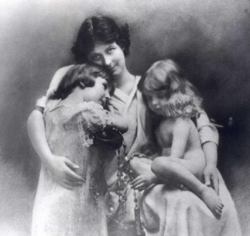 The closed-minded society of San Francisco soon overshadowed Duncan's goals. Believing that no one in California would value her, Duncan set out to find an appreciative audience. She scraped together enough money to move to Chicago, where she wandered the streets auditioning for every theatre she encountered. Every time, her performance was met with the same response: "It's very lovely, but not for the theatre." When one manager finally agreed to hire her, he asked for "pep" and "frills," dismissing any art from her dance. "I had enough of trying to amuse the public with something which was against my ideals," Duncan said, reflecting on why she could not stay in Chicago.

When a traveling theatre came to Chicago, it inspired Duncan to relocate once again. She directly confronted the manager of the theatre, who was a respected aesthete. "I have a great idea to put before you," she professed, "and you are probably the only man in this country who can understand it." She continued, apprising him of the dance she had discovered until, at last, he offered her an engagement in New York. She received overwhelming applause when she first graced the New York stage with her dancing, however, the manager was aghast at the audience’s praise. For the rest of the shows, he would turn the stage lights off during her performance so that the audience could not see her dance, and therefore had nothing to applaud.

After Duncan left this dismal theatre in 1896, a miraculous coincidence occured. One day, while she was dancing in her New York apartment to the music of Ethelbert Nevin, the composer heard his own music being played and bustled into the studio. After seeing Duncan dance to his "Narcissus," Nevin was overcome with bliss and immediately proposed a concert, for which he would compose and Duncan would dance. The subsequent success of the concerts led to invitations for Duncan to dance in the drawing-rooms and courtyards of the wealthiest families in New York. Although they found her dancing charming, these elite societies had no real regard for art, and Duncan felt increasingly overlooked. 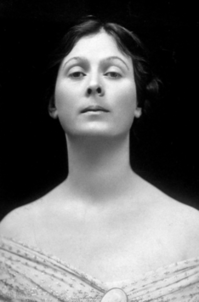 Duncan had yet to be seen as the profound artist she knew herself to be. "If this was all the response America had to make," she thought, "it was useless to knock any longer upon a door so closely shut, before so cold an audience." When she escaped to London, she was welcomed graciously and spent all of her time in the presence of artists who praised and promoted her. She danced for actors, painters, poets, and royalty, but most importantly, she danced for herself for the first time in her career. In 1900, Duncan moved to Paris and spent her time admiring sculptures in The Louvre, dancing in the gardens of Versailles, and searching for movements that could reveal true human spirit. To her, this was dance. Her sole purpose was, as she said, "To bring the knowledge of the Beauty and Holiness of the human body through its expression of movements."

Duncan left Paris on tour throughout Europe in 1901. While dancing in Budapest, she fell in love with the stage actor Oscar Beregi. Their love, however, caused a halt in both of their careers. Beregi recognized this and chose to end their relationship, focusing on performing. Heartbroken, Duncan left Hungary and began dancing again after a brief hiatus, swearing never to abandon her art for love again.

After becoming remarkably famous in Germany and Austria, Duncan embarked on a pilgrimage to Greece. Enraptured by the Athenian culture, she cultivated an idea of a school where she would train a chorus of dancers -- hundreds of children whom she would share her art with. She toured Germany and Russia, dancing to sold-out theatres, hoping to make enough money to establish her school. While traveling through Russia, her coach was stopped by a funeral procession for workers who had been killed because they begged for food. This encounter convinced Duncan that her life and her art were worthless if not spent aiding the down-trodden.

Duncan finally opened a school in Germany where she housed forty children in her studios. "This is not a school. This is a hospital," someone once said to her, insisting that she was not just responsible for their dancing but also their well-being. During the first few years of her school, Duncan gave birth to two children of her own, however, she soon lost both of them in a car accident. This loss only gave her greater compassion for the children in her new schools, which had since been established amongst Paris, Berlin, and Moscow. Having once aspired to be a mother to her own children, she now had to settle for being the mother of a new school of dance. 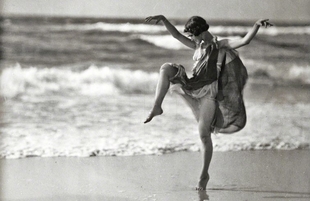 In 1921, Duncan became enchanted by the proletariat uprisings that smoldered across Russia following the Bolshevik revolution. She produced dances that depicted her solidarity with and hope for the people fighting for liberty. “Yes, I am a revolutionist,” she told the press, “All true artists are revolutionists.” In addition to the revolution, she wrote about and choreographed dances inspired by the fight for women’s rights to free-love and out-of-wedlock childbearing. She believed that marriage was an unethical contract which no intelligent woman should subject herself to. Her radical ideas received criticism throughout her life, but with persistence, she won the hearts of artists, students, and revolutionaries everywhere she went.

On September 14, 1927, as she rode away in a fashionable, new car, Duncan jokingly yelled to her friends, “Goodbye my friends, I go to glory!" As if fulfilling her prophecy, the long silk scarf which was draped across her shoulders swiftly became entangled in the wheel of the car, breaking her neck instantly. Her dramatic death at the age of fifty was a climax that her tragic, yet gratified life seemed to warrant.

Although she graced countless stages, sold out many shows, and received standing ovations nearly every night, Isadora Duncan was not merely an entertainer. She was an artist who lived to share her knowledge of life with anyone who would listen. Duncan predicted that fifty years after she died, the people who once rejected her would build a monument in her honor. Within fifteen years of her death, this monument was constructed not in stone, but in the imitation of her work by the ballets which had once rebuked her philosophy and denied her brilliance.

Why Did I Choose to Research Isadora Duncan?

I originally decided to research Isadora Duncan because of her unique philosophy in modern dance. As I began reading about her life, however, I discovered her remarkably influential steps to evolve the art of dance as a whole. Her impression is still present in professional dance today, but more often than not, she receives little to no credit.