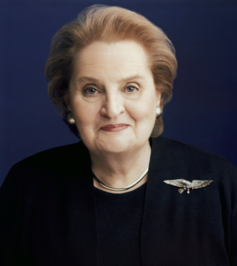 Madeleine Albright was born on May 15th, 1937 to Anna and Josef Korbel in Prague, Czechoslovakia, now known as the Czech Republic. Born into a world that was about to break out into war, Albright experienced a plethora of struggles early in her life. In 1939 at the start of WWII, Nazi Germany invaded Czechoslovakia when Albright was just two years old. Her entire family was forced to flee their country to go to England. For a long time, the Catholic Albright believed the migration was solely due to their family’s political beliefs, but she soon learned it was also due to her Jewish family history. It was later revealed that their family had converted from Judaism to Catholicism, changing her name from its original Marie Jana Korbel to Madeleine Korbel. It was also discovered that three of her grandparents ended up perishing in Nazi concentration camps during the Holocaust. 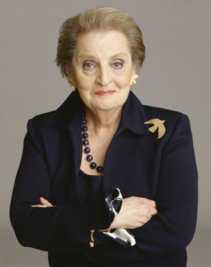 After WWII ended in 1945, the Korbels moved back to their home in Czechoslovakia. However, once the Communist party began to gain influence, the Korbels were forced to emigrate again. This firsthand experience of communism in her country would later influence Albright to become a huge proponent of spreading American democratic ideals as Secretary of State. The family relocated to Colorado in the United States, where her father, Josef, became a professor of international relations at the University of Denver, thanks to his experience as a part of the Czechoslovak Foreign Service and Ambassador to Yugoslavia. There, Albright grew up learning a lot about international relations from her father. She graduated high school and received a scholarship to Wellesley College in Massachusetts, where she graduated in 1959 with a Bachelor of Arts in political science with honors. While attending Wellesley, she married Joseph Albright, whom she had worked with as an intern at his family’s publishing company. After that, Albright went on to achieve her Master’s and a Ph.D. in Public Law and Government at Columbia University in 1976. After graduating from Columbia, Albright settled in Washington D.C. and went on to become a legislative assistant to Democratic Maine Senator Edmund S. Muskie. After four years, Albright began serving under the National Security Council under former President Jimmy Carter. However, once Ronald Reagan came into office, Albright started to work for several nonprofit organizations. She also became a Research Professor of International Affairs at Georgetown’s School of Foreign Service and became the Director of the Women in Foreign Service Program. Around this time, her life changed drastically. Her husband left her for another woman, and the couple divorced in 1982.

In 1992, Albright was once again pulled back into government work with Bill Clinton’s presidential election. Under his administration, she was appointed ambassador to the United Nations, where she gained a reputation as a powerful speaker who bargained for America’s interests and pushed for greater American influence in the U.N. and around the world. She was known for being in favor of American military intervention, including championing American involvement in the Balkans and in Haiti in 1994. During an interview, she stated, “U.S. leadership in world politics and in multilateral organizations is a fundamental tenet of the Clinton Administration.”

In 1996, she was officially nominated for the position of the 64th Secretary of State by former President Clinton, where she was unanimously supported by the Senate. She was sworn in in 1997 and replaced Warren Christopher to become the first female Secretary of State in the history of the United States. 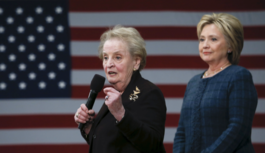 Throughout her tenure as the Secretary of State, Albright supported a humanitarian agenda and pushed for democratic values and greater U.N. intervention. For example, she advocated for greater international intervention during the humanitarian crisis in Kosovo in 1999, in which millions of refugees sought to flee Kosovo in response to Serbian oppression and expulsion of ethnic minorities. In addition, she helped negotiations between Israel and several Arab nations and worked to spread the influence of the United Nations further east in Europe. In 2000, she made history by being the highest ranking official from the United States to visit North Korea in person to negotiate with Kim Jong Il about a nuclear deal.

When former President George Bush was elected in 2000, Albright left her position as Secretary of State and returned to teaching at Georgetown. Although she also received political job offers from the Czech government, Albright chose to stay in the United States. Since then, she has also written several books about her own experiences, including Fascism: A Warning, Prague Winter: A Personal Story of Remembrance and War, 1937-1948, and Madam Secretary: A Memoir. She has also worked with more nonprofit organizations, offered global strategy consulting, and made a private investment fund called Albright Capital Management. In 2012, she received the Presidential Medal of Freedom during the Obama Administration for her service.

Why Did I Choose to Research Madeleine Albright?

Although I had previously heard about Madeleine Albright, I first became interested in learning more about her when she made several cameos in one of my favorite shows, Madam Secretary. Throughout the show, when there is a particularly tough problem to solve, the main character, who plays the Secretary of State, seeks advice from Albright. Since watching the show, I have always wanted to learn more about her, so I took this opportunity to research more about her life and background for my article, especially since not many people know about her despite her contribution to our foreign policy and humanitarian efforts.

‌Office of the Historian, Foreign Service Institute. (n.d.). Biographies of the Secretaries of State: Madeleine Korbel Albright (1937–). Retrieved May 28, 2020, from https://history.state.gov/departmenthistory/people/albright-madeleine-korbel

‌The Editors of Encyclopaedia Britannica. (2020, May 11). Madeleine Albright. Retrieved May 28, 2020, from https://www.britannica.com/biography/Madeleine-Albright