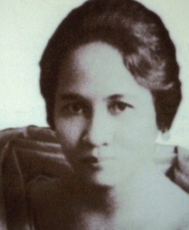 Encarnacion Alzona was born on March 25, 1895 to an academic family in Biñan, Philippines. She grew up in the province of Tayabas (known as Quezon today), where her father was a judge. Like her distant relative and Philippine national hero, Jose Rizal, Alzona was a firm believer in Filipino empowerment. Her work is grounded in feminism, anti-imperialism, and Filipino self-determination.

In 1917, Alzona received a Bachelor's Degree in History from the University of the Philippines in Manila. The following year, she received a Master’s degree from the school after finishing her thesis, an in-depth look into education standards for women in the Philippines. In the pre-colonial era, Filipina women, who were regarded as equals or superiors to men, were responsible for educating members of their communities. Much of Alzona’s work explores the effects of Spanish colonization on education and rights for women in the Philippines: a major consequence of European colonization was the imposition of gender hierarchies, which were not present in Filipino society prior to the colonial era. During her time as a student in the Philippines, Alzona published numerous articles in the Philippine Review, arguing for women’s rights and suffrage. Her desire to create more opportunities for Filipinas intensified when the American colonial government refused to grant Filipinas the right to vote in 1920, the year that white American women gained the right to vote.

Alzona continued her studies in the United States, enrolling at the University of Chicago, Radcliffe College of Harvard University, and Columbia University under the American pensionado program. After obtaining another master’s degree from Harvard, she attended Columbia, where she worked towards her Ph.D in history. During her time in the U.S., Alzona focused on modern European history and international law, which she later used to support arguments for Filipino liberation. In 1923, Alzona became the first Filipina in history to receive a doctorate.

The United States designed the pensionado program in 1903 to educate a new generation of Filipino politicians, historians, and leaders. The act instilled pro-American values in young Filipinos, encouraging them to push American agendas in the Philippines and foster acceptance of Western occupation in the archipelago. Pensionados were required to work at least 18 months in the American-established Insular Government in the Philippines. Government officials regularly reminded Filipino graduates that without American money, they would not have received their education and had access to well-paying job opportunities. Although Encarnacion Alzona voiced gratitude for her American education, receiving an American degree did not stop her from criticizing Western practices.

After receiving her doctorate, Alzona returned to her alma mater, University of the Philippines (UP), where she became chairwoman of the Department of History. During her time as department chair, Alzona oversaw UP’s history curriculum and worked closely with the university’s administrators. There, she also wrote her first book, A History of Education in the Philippines, in which she argues that the revolutionary government preceding American colonization is responsible for the improvements in pedagogy, defying the countless American officials who have taken credit for enhancing the Filipino education system. 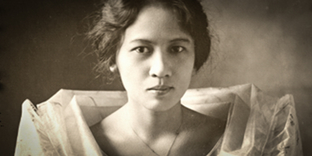 In her most notable work, The Filipino Woman: Her Social Economic, and Political Status, 1565-1933, Alzona asserts that the revolutionary government, led by Aguinaldo, crafted the plans for the mass education system that Americans would later take credit for. Alzona also discusses how villages educated their youth and the unique role women had as teachers prior to colonization: priestess-poets (Babaylan) were responsible for recording a community’s history and sharing it with new generations, starting a tradition of oral histories in Filipino culture that lasts to this day. She stresses that democratic ideals have been part of Filipino culture since the pre-colonial era, countering American arguments that Westerners are responsible for bringing “civilization” to the Philippine islands.

Throughout her career, Encarnacion Alzona worked to advance educational and political opportunities for women in the Philippines. Alzona used her skills as a historian and scholar, as well as her experience in activism, to work towards suffrage for Filipinas. Catherine Ceniza Choy, a history professor at University of California, Berkeley, cites Alzona as “the first scholar to comprehensively document Filipino women’s history” (Choy, 127). The Filipino Woman is a comprehensive book far ahead of its time, and it continues to be used in Asian studies courses to this day. Much of the book was written while Alzona was at the University of Michigan as a Barbour fellow. In The Filipino Woman, Alzona explores how colonization by Spanish and American forces have oppressed Filipinas, taking away freedoms they once enjoyed in pre-colonial societies. Most notably, Alzona critiques colonial educators for aiming to Christianize and create “devout, chaste wives and mothers” rather than scholars.

Alzona was a leader in the Filipino feminist movement of the 1930s. Women in pre-colonial Philippines held important roles as priestesses, queens, and politicians, and Alzona’s activism drew on this feminist history from the Philippines’ past. Alzona helped create the Philippine Association of University Women in 1928, an organization that was crucial in the suffrage movement, and she worked with other Filipina suffragists, holding regular meetings with legislators to push for voting rights. Alzona famously hosted ‘tea parties’ where she invited congressmen to dine and converse with her about her writings and ideas. Alzona’s ability to persuade legislators was vital in leading to the women’s suffrage plebiscite, a national vote on women’s suffrage. Support for women’s suffrage was overwhelming, and Filipinas were given the right to vote in 1937 thanks to efforts from Alzona and other Filipina feminists, like Pura Villanueva Kilaw and Concepcion Felix Rodriguez.

Alzona’s historical contributions have left a lasting legacy in the Philippines and abroad. Her detailed biographies of forgotten Filipino heroes like Paz Guazon and Librada Avelino paved the way for future historians, such as Catherine Ceniza Choy and Maria Luisa Camagay, to explore forgotten feminist history in the Philippines. Alzona devoted herself to translating historical texts from Jose Rizal and Graciano Lopez Jaena from Spanish into Filipino dialects, ensuring that important history was accessible to as many Filipinos as possible. 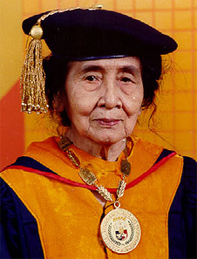 During World War II, Alzona stayed in Manila under Japanese occupation, retaining her position as a professor while also supporting the war effort. She was heavily involved in the anti-Japanese guerilla movement, another example of her commitment to resisting foreign occupation in the Philippines. Alzona was a key member of Manuel Quezon’s guerilla unit, tasked with managing money and collecting important documents. She was chosen to represent the Philippines in the UNESCO by President Roxas in 1946. In 1955, Alzona co-founded the Philippine Historical Association with historians Teodoro Agonicillo and Gregorio Zaide. The Association, which still operates today, unites historians from all over the Philippines in order to study Filipino history and collect important relics relating to the Philippines. Until 1959, Alzona also served as chair of the National Historical Institute.

Alzona retired from teaching in 1945, but she remained an important figure at the University of the Philippines. For her many contributions to the University, Alzona was named a professor emeritus—a title given to distinguished retired professors—in 1963.

Alzona’s love of Filipino history was present in all aspects of her life. When she was not teaching or holding important leadership positions on international boards, Alzona worked to promote and preserve the works of Jose Rizal. In 1985, Alzona was named a National Scientist of the Philippines by President Ferdinand Marcos. The National Scientist title is the highest award given to Filipino scientists, scholars, and politicians by the Philippine government. Her contributions to Filipino history are still felt today in classrooms all around the world.

Encarnacion Alzona passed in 2001 at the age of 105, just ten days before her 106th birthday. She is laid to rest at the Libingan ng mga Bayani (Heroes’ Cemetery), where countless other influential Filipino military leaders, judges, and scholars are also interred.

Why Did I Choose to Research Encarnacion Alzona?

As a Filipina-American, I am inspired by Encarnacion Alzona. The contributions she made to the Philippines are countless: her commitment to opening doors for Filipina women, regardless of status, and her blatant criticism of colonization support Filipino self-determination and continue to be important today. Unfortunately, the stories of many women like Alzona have been lost throughout history. I wanted to do my part to ensure that the name Encarnacion Alzona continues to be important in the 21st century.

‌Tomacruz, Sofia (2020). 7 Women Who Made Philippine History.” Retrieved from https://rappler.com/newsbreak/iq/list-women-made-philippine-history