Benazir Bhutto was born on June 21, 1953 in Karachi, Pakistan to a wealthy family. While growing up in Pakistan, Bhutto’s father became the Prime Minister. When she was 24, the army overthrew the government and her father was sent to jail. She visited him often and learned about Pakistani politics and what it took to make a good leader. She was encouraged to study great female leaders like Indira Gandhi and Joan of Arc.

Bhutto was educated in Pakistan before going abroad to Radcliffe College, which was the women's college at Harvard. Later, she went on to attend Harvard University where she earned her Bachelors of the Arts in Comparative Government. Afterward, she studied international law and diplomacy at Oxford University. 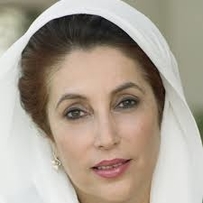 She was married to Asif Ali Zardari, and with him she had three children. In 1988, she was elected to be the nation’s first female Prime Minister, all while having a 3 month old baby. She was up for election in 1990 again but lost, and then in 1993 came back victorious.

As Prime Minister, she was left in a tough position when it came to international relations. At the time, the Soviet Union was withdrawing from Afghanistan which resulted in chaos. In order to restore relations with India, Bhutto reached out to their Prime Minister, Rjiv Gandhi, but he was soon elected out of office and the assassinated. Due to the situation in Afghanistan, there were tensions between the U.S. and Pakistan, but the relationship between the two countries broke entirely when Bhutto wanted Pakistan to start building their arsenal of nuclear weapons. She believed that Pakistan needed to have nuclear weapons to be seen as a world superpower and to be able to defend themselves as India tested their first nuclear bomb in 1974.

Domestically, Bhutto wanted to improve human rights and how Pakistani society viewed women. She restored freedom of the press and allowed labor and student unions to meet openly again. She worked hard to weaken the conservative president and his powerful military allies, but in the end the President had final veto powers to stop Bhutto’s agenda. She strived to ensure safety and freedom in the lives of ordinary Pakistani citizens. 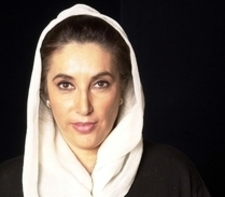 She served two terms as Prime Minister until 1997 when she was dismissed from office by the President of Pakistan. Once she was dismissed, she placed herself in exile in Britain and then Dubai. She was accused of corruption in 1999 and imprisoned for three years. This sentence did not stop Bhutto from running her party from abroad and ensuring their success.

She returned to Pakistan in October of 2007 when the rally that was welcoming her home was hit by a suicide attack which killed over 130 people. It is said that Bhutto only survived because she hid behind her armored vehicle as the attack occurred.

Later that year, in December 2007 she was at a rally in Rawalpindi (about 8 miles south of Islamabad, the capital of Pakistan) an assassin fired shots at Bhutto and then killed himself along with 36 other people. According to the Interior Ministry of Pakistan, she died because she hit her head on the armored vehicle, not due to the bullets or shrapnel.

Bhutto’s death is memorialized in Pakistan, specifically in her home city of Karachi and is revered for what she did for women in politics, not only in Pakistan but for the Muslim world as a whole. Her legacy is somewhat tainted due to the corruption charges, but she is still revered in Pakistan for the tremendous leader she was.