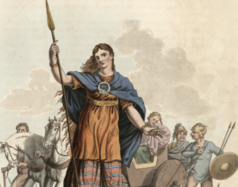 Boudica was born in 30 AD to a high class family in Colchester, England. Other than this, little is known about Boudica’s early life. In fact, all of the information about her later life was recorded by Roman scholars, namely Tacitus and Cassius Dio. She was described by Cassius Dio as, “very tall, the glance of her eye most fierce; her voice harsh. A great mass of the reddest hair fell down to her hips. Her appearance was terrifying.” Boudica’s appearance struck everyone who laid eyes on her. When she was eighteen, Boudica married King Prasutagas of the Celtic Iceni tribe of East Anglia and ruled beside him as Queen. Hoping to make peace with the Romans and keep his kingdom safe from attack, King Prasutagas named Emperor Nero co-heir to his land and wealth, along with his daughters. When King Prasutagas passed away without leaving a male heir, Emperor Nero annexed his territory and seized all of his property, even though it rightfully belonged to Boudica and her daughters. 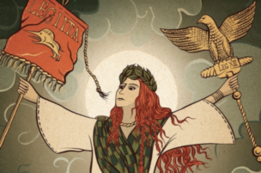 Then, Nero redistributed the lands to Roman soldiers and officials. King Prasutagas’ family and high ranking members of the Iceni tribe were treated like slaves by the Romans and their belongings were plundered. To further shame and humiliate the Iceni, the Romans publicly flogged Queen Boudica and raped her two daughters. Boudica vowed retribution against the Romans, saying, “Nothing is safe from Roman pride and arrogance. They will deface the sacred and will deflower our virgins. Win the battle or perish, that is what I, a woman, will do.” She was determined that the Romans would not break her. 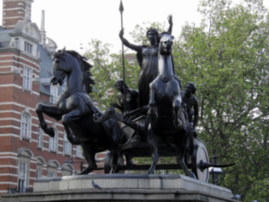 The Iceni and the Trinovantes (the Iceni’s neighbors to the south) forged an alliance, having both suffered at the hands of a common enemy— the Romans. With the Roman provincial governor Gaius Suetonius Paulinus distracted with fighting a battle in Wales, Boudica seized the opportunity to mount a rebellion. The combined force of the two tribes defeated the Roman Ninth Legion, and then conquered Camulodunum (Colchester), Londinium (London), and Verulamium (St. Albans). They sacked and set fire to the towns, terrifying the defending Romans into fleeing. However, once Roman governor Seutonius returned from battle in Wales, he gathered troops and eventually defeated the Iceni and Trinovante forces. In an account in the Annals of Rome, historian Tacitus describes the decisive final battle between Boudica and the Romans, which took place in the Midlands of England. It was speculated to have taken place in Mancetter in 61 AD. The Iceni and Trinovantes could not afford advanced weapons and armor in comparison to the Romans; they rode chariots and wielded short oval shields, spears, and flat, double-edged swords, which were inferior to the more protective armor and powerful javelins of the Romans. The Romans trapped Boudica’s army, leaving them no room to push forward or retreat, and massacred them with their superior weaponry. Although they ultimately fell to the Romans, the Iceni and Trinovante forces dealt substantial damage, taking the lives of almost 70,000 Romans and pro-Roman Britons, proving that they were not invincible. After their defeat, Boudica and her daughters commited suicide by poison, wishing to die honorable deaths rather than live in Roman captivity.

Boudica was and continues to be hailed as a national British heroine, a strong leader, and a courageous warrior, which is why the Iceni honored her with an elaborate burial ceremony. A bronze statue of Boudica riding her chariot was commissioned and designed by Thomas Thorneycraft, a renowned British artist and engineer. After Thorneycraft’s death, the piece was finished by his son and placed next to the Houses of Parliament in what was Londinium, the Roman capital of ancient Britain, in 1902. It still stands there today in her honor.

Why Did I Choose to Research Boudica?

During freshman year, while taking AP World History, I saw a dire lack of female rulers and leaders, so I chose to write my final research paper comparing powerful female queens across different time periods. I came across Boudica and wanted to learn more about her inspirational story by writing a piece for iFeminist.

Who Was Boudica?. (2020). HISTORY. Retrieved from https://www.history.com/news/who-was-boudica

Boudica: scourge of the Roman empire. (2019). Retrieved from https://www.historyextra.com/period/roman/boudica-boudicca-boadicea-warrior-woman-celtic-who-what-fate-queen-roman-empire/

Alternate history: what if Boudica had defeated the Romans?. (2020). Retrieved from https://www.historyextra.com/period/roman/alternate-history-what-if-boudica-defeated-romans-watling-street/

Goldfarb, K., Queen Boudica And Her Epic Revenge Against The Romans. (2019). All That’s Interesting. Retrieved from https://allthatsinteresting.com/queen-boudica