Jocelyn Bell Burnell was born in 1943 in Belfast, Ireland, just a few blocks away from the Armagh Observatory. Guided by her parents and the observatory staff, Burnell was introduced early on to the field of science, as her family believed strongly in women’s education. She initially failed her entrance exam for higher education, so her parents sent her to the Mount School, a Quaker boarding school for girls. 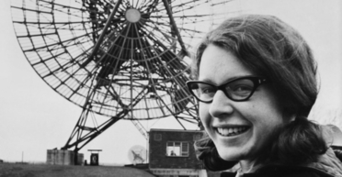 Burnell became interested in astronomy through her father’s books, and this fascination was encouraged by her parents. She completed a bachelor’s of science degree in physics and then began her studies at Cambridge University for a PhD. She worked with her advisor, astrophysicist Anthony Hewish, as a research assistant. Hewish’s project was aimed at finding more quasars, which are luminous galactic nuclei in which supermassive black holes are surrounded by accretion disks. The lab team examined radio waves, but in order to take their research to the next level, they’d need a radio telescope. Specifically, they would need one that stretched to the length of about fifty seven tennis courts. Burnell was the perfect graduate student for the job. Her first two years at Cambridge University were spent assembling masses of wires and poles into an 81.5 megahertz radio telescope that went into use in 1967. This telescope produced 21,000 feet of paper in a month, and it was in that data that Burnell would make a discovery that would turn the field of astrophysics on its head.

Though her colleagues never suspected it, Burnell had imposter syndrome, which affects many women in STEM. It’s described as “the idea that you’ve only succeeded due to luck, and not because of your talents or qualifications” (Abrams, 2018). She wasn’t prepared for the natural confidence of students at Cambridge. However, she decided to work as hard as she could before her fear of being kicked out came to actualization and made up her mind to go out as glorious as the quasars she studied. Burnell ran the telescope for the first six months of its operation and analyzed about nine hundred feet of paper a day. She discovered about close to one hundred new quasars. 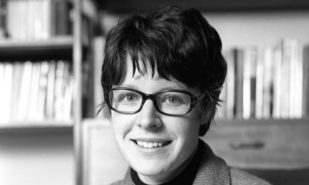 On August 6, 1967, Burnell marked the first of what she’d dub as “scruff”: repetitive, indefinite patterns in the data sheets that weren’t explained by interference. It appeared again and again. They were too fast and too regular to be quasars; each one was spaced by 1.3 seconds. Scientists called Burnell’s discovery LGM-1, meaning “little green men,” as Hewish was convinced that they were somehow artificial. Burnell discovered four more scruff-y objects, which later became known as pulsars. After Brunell’s discovery was published in Nature, it took a few more months to pin them down as spinning neutron stars that emitted x-ray or gamma radiation, the likes of which had been largely theoretical at the time. In 2017, Burnell reminisced on the state of astrophysics at the time, remarking that “at the time this was happening, we didn’t know there was stuff between the stars, let alone that it was turbulent” (Boissoneault, 2018).

In 1974, the Nobel prize in physics was awarded to Hewish and Sir Martin Ryle, and the award description states that it was given to these two men for their “pioneering research in radio astrophysics...and Hewish for his decisive role in the discovery of pulsars.” (The Nobel Prize in Physics 1974) 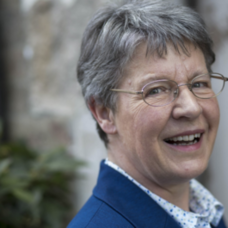 Upon hearing of this, Burnell stated that the recipient was appropriately chosen since she was only a graduate student, though many believe she was slighted. After her revolutionary discovery, Burnell focused on teaching, researching, and empowering women. Astronomer Nicholas Suntzeff describes her as “a heroic person who has done more to advance science across the three pillars of academics—research, teaching, and service—than almost any other living scientist” (Drake, 2018). Burnell describes how her engagement ring was seen as a sign of quitting in her research lab—it was considered shameful for married women to work, as it seemed that her husband couldn’t earn enough money. Burnell dabbled between different subfields of astronomy, before accepting a position as visiting professor at the University of Oxford. Later, she was president of the Royal Astronomical Society and elected as president of the Institute of Physics in 2008.

The importance of Burnell’s discovery wasn’t simply the phenomenon itself: pulsars provide more evidence for Einstein's theory of relativity because their density causes them to affect space-time. Pulsars are almost as accurate as atomic clocks, so they could function as navigation points for deep space missions. They may also be helpful in detecting and locating gravitational waves once high quality data is obtained.

“One of the hazards of making a major discovery early in your career is the burden of expectation, not helped in my case by becoming a wife and mother soon afterwards. I'm sure some people think it was a flash in the pan,” writes Burnell, reflecting on her career. Even though Burnell is considered one of the most influential living scientists, Burnell was still held back by antiquated societal expectations. She has since advocated for increasing the number of women in STEM fields through strategies planned out at Royal Society of Edinburgh. In 2019, she was awarded the Special Breakthrough Prize in Fundamental Physics, not only for her scientific achievements but also for “a lifetime of inspiring leadership in the scientific community” (Special Breakthrough Prize In Fundamental Physics Awarded To Jocelyn Bell Burnell For Discovery Of Pulsars, 2018).

Why Did I Choose to Research Jocelyn Bell Burnell?

I chose Jocelyn Bell Burnell to research because I wanted to focus on pioneering women in STEM that faced many challenges, both societal and personal. She wasn’t afraid to discuss imposter syndrome or initial failure, and she focused her efforts on making STEM a better place for women than it was for her. She made incredible contributions to astrophysics and has furthered our understanding of the universe around us.

‌Drake, N. (2018, September 06). Meet the Woman Who Found the Most Useful Stars in the Universe. Retrieved July 05, 2020, from https://www.nationalgeographic.com/science/2018/09/news-jocelyn-bell-burnell-breakthrough-prize-pulsars-astronomy/