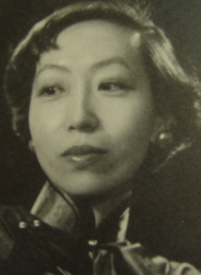 Born into a wealthy family, Zhang Ying, later known as Eileen Chang, was surrounded by renowned individuals, such as her grandmother— the eldest daughter of Li Hongzhang and Zhang Zhiyin, a widely-known statesman from the Qing dynasty. Chang began taking classes at a traditional private school at age four. Her parents were not around very often, as her mother Huang Suqiong moved to the United Kingdom along with Chang’s aunt, Zhang Maoyuan, when Chang was young after her father began a relationship with a younger woman. Following their departure, Chang’s father, Zhang Zhiyi, became addicted to opium. As a result of Zhang’s infidelity, her parents divorced in 1930, and Chang and her brother Zijing were raised to adulthood by their father, who eventually weaned off of drug use. 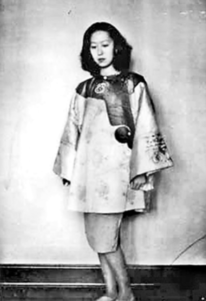 Although Chang lived with her father, Chang’s mother placed her in Saint Maria Girls’ School, a local American Christian school, when she was 11 years old. There, she began reading traditional Chinese novels like Hong Lou Meng, or “Dream of the Red Chamber,” which was one of China’s Four Great Classical Novels. A year later, at age 12, Eileen debuted her own short novel called The Unfortunate She within her school magazine. Chang graduated in 1937 and a year later, began living with her biological mother again after several disagreements with her stepmother, which ended in beatings by her father onto young Chang. Later, she received a full scholarship to the University of London in 1939 but declined the offer, as China was fighting the Second Sino-Japanese War. She instead headed to the University of Hong Kong to study English Literature, where she became friends with a lifelong peer writer, Fatima Mohideen. During the semester before her graduation, Chang was forced to move back to China when the Japanese invaded Hong Kong.

Back in Shanghai, Chang began her career as a writer. She met Hu Lancheng, a man of three failed marriages, and married him just a year later in 1943, despite being 14 years younger than him. Later on, Hu was deemed a traitor for collaborating with Japanese government officials while World War II was still raging on. The two divorced in 1947 as a result. 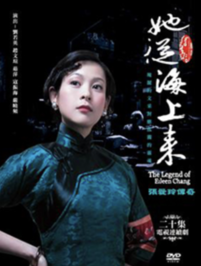 Chang returned to Hong Kong in 1952 and resumed her career as a novelist. However, her reputation died down as post-World War II cultural and political conflict worsened following the 1949 Communist takeover. In 1955, Chang headed to the United States, where she met Ferdinand Reyher, an American screenwriter who became her second husband. She later had an abortion when Reyher was unwilling to have children. Chang was granted U.S. citizenship in July 1960 but soon went back to Taiwan in search of new opportunities. Her husband began to suffer strokes and eventually became paralyzed, passing away on October 8, 1967. Soon after, Chang published two English semi-biographical books called The Fall of the Pagoda and The Book Of Change, in which she attempted to offer a new vividly descriptive writing style to the mainstream literature in America. However, her stories were mostly unsuccessful, and in 1969, she began a new occupation as a senior linguistics researcher at the University of California, Berkeley after being invited by Shih-Hsiang Chen, a Professor of Oriental Languages. When Professor Chen died in 1971, Chang felt obligated to leave her role at Berkeley. In 1973, she moved to Los Angeles by herself and began a private life.

Chang successfully translated Shanghai Flowers, a critically acclaimed novel by Han Bangqing, to English in 1975. Chang later became a large celebrity within the world of literature as Crown Magazine published her pieces “Lust, Caution”, “Xiang Jian Huan”, and “Fu Hua Lang Rui”. Eileen Chang has been listed as one of the four women geniuses of China, along with Lu Bicheng, Xiao Hong, and Shi Pingmei.

Chang suffered a tragic death by way of a heart attack at the age of 74 in 1995. However, her influence on literature is undeniable. Dominic Cheung, a professor of East Asian languages at the University of Southern California, stated that Eileen Chang would have received a Nobel Peace Prize in Literature had the Chinese Civil War not erupted in her home country.

Why Did I Choose to Research Eileen Chang?

I chose to research Eileen Chang for iFeminist because I believe that Chang is a woman of mystery―a woman too talented for the world, yet one that never seemed to receive much in return. I look up to Chang for her many groundbreaking works in literature and the large impact she has made on modern Asian-American writing.

Eileen Chang (Author of Love in a Fallen City). (n.d.). Retrieved from https://www.goodreads.com/author/show/110226.Eileen_Chang

The Editors of Encyclopaedia Britannica. (2020, May 1). Zhang Ailing | Chinese writer. Retrieved from https://www.britannica.com/biography/Zhang-Ailing