“I was born in January 1922 in a progressive, open-minded family, not perhaps with a silver spoon in my mouth, but surely with a book in hand,” Rajeshwari Chatterjee writes in the opening line of her article, “Lucky to Be Where I Am,” published by the Indian Academy of Sciences. She was born in Karnataka, a state in southwest India. Chatterjee’s grandmother, Kamalamma Dasappa, has been credited as a “social reformer for women in India” (“Rajeshwari Chatterjee”, 2016) and fought for a policy that accelerated the school track for girls to receive their education. Chatterjee and her cousins went through this program, and Chatterjee pursued physics and mathematics through bachelor’s and master's degrees, maintaining first rank throughout her education.

In 1946, Chatterjee was selected for a government program that allowed young Indian scientists to study abroad, and eventually made her way to the University of Michigan. Her supportive family allowed her to go despite being unmarried, a fact that she acknowledges was unusual for the time. “Many young girls today,” Chatterjee wrote, “can walk into courses and careers of their choice, may have no idea of the kind of restrictions women then had to face, even abroad.” (K. Shashikala, n.d.) After completing her masters in electrical engineering, Chatterjee received practical training on radio frequency measurements at the National Bureau of Standards, and then went back to the University of Michigan to pursue a Ph.D. on a Barbour scholarship, a full-tuition scholarship for high achieving women with the most potential to give back to their home countries.

After returning to India in 1953, Chatterjee became the first female faculty member of the esteemed Indian Institute of Science and began a new branch of her career in research. During her time there, she met her future husband Sisir Kumar Chatterjee. The two became a brilliant team, contributing significantly to the fields of science and engineering. As microwave research had advanced rapidly during World War 2, Chatterjee and her husband introduced and taught courses on microwave technology and satellite communication. The Chatterjees built the first microwave engineering lab, working on studying and designing microwave circuits and systems, in India from the ground up. Chatterjee became chairmen of the Department of Electrical Communication Engineering until she retired in 1981. 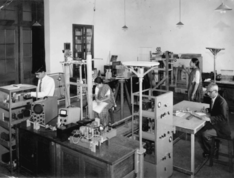 After Sisir Kumar’s death in 1994, Chatterjee continued writing books on the field of antennas, leaving her mark and giving back to her community. She eventually guided twenty Ph.D. students to future careers as professors and directors.

Chatterjee ‘s published work includes one hundred papers and seven books, such as Elements of Microwave Engineering and Annenates for Information Super Skyways. In addition to her literary achievements, which include 100 published papers and 7 books, Chatterjee won several awards like the Lord Mountbatten prize for best paper from the Institute of Electrical and Radio Engineering, the J. C. Bose Memorial prize for best research paper, and the Ramlal Wadhwa prize for best research and teaching work.

Despite being the first female engineer from Karnataka, Chatterjee was never recognized by the state or Indian government for her contributions to the field of engineering during her lifetime. Posthumously, she was honored as “one of the country’s first women achievers” by the Union Ministry of Women and Child development of the Government of India. 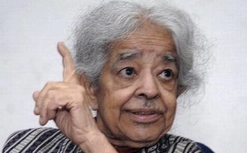 Despite being the first female engineer from Karnataka, Chatterjee was never recognized by the state or Indian government for her contributions to the field of engineering during her lifetime. Posthumously, she was honored as “one of the country’s first women achievers” by the Union Ministry of Women and Child development of the Government of India.

After retiring from the Indian Institute of Science, Chatterjee worked with the Indian Association for Women’s Studies and focused her efforts on empowering women and uplifting the underprivileged through social programs.

Chatterjee died in 2010 but her legacy as a pioneering woman in engineering lives on through the lives of the many students she impacted and her award-winning research and lab. Her work in microwave research is still used in RADAR technology and defense applications.

When Chatterjee wasn’t shattering glass ceilings in higher education, research, or engineering, she was empowering other women to study and work in any field they wanted to pursue, and her legacy lives on through her research, lab and the lives of the many students she impacted.

Why Did I Choose to Research Rajeshwari Chatterjee?

I chose to research Rajeshwari Chatterjee to help uncover the hidden stories of women in science and technology throughout history, and I wanted to highlight Chatterjee’s accomplishments as a pioneer in the field of microwave engineering.

Shashikala, K. (n.d.). Lucky to be where I am. Retrieved June 06, 2020, from https://www.ias.ac.in/public/Resources/Initiatives/Women_in_Science/Contributors/rajeshwarichatt.pdf‌