A pinnacle of her time, Joan Clarke was an intelligent and accepting individual who was treated as an equal by her peers and revered in the workplace despite her gender. 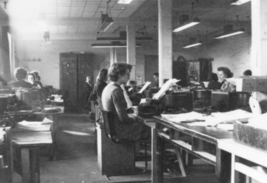 Joan Clarke was born on June 24th, 1917, in West Norwood, a region in southern London, England. Clarke was the youngest child of William Clarke, a clergyman, and Dorothy Clarke. She had three older brothers and one older sister. Though women’s education was discouraged in the time period, Clarke pursued knowledge with vigor and persistence.

Clarke attended Dulwich High School, and upon graduation, matriculated to Cambridge University in 1936, when she was 19 years old. She attended Newnham College and earned a First in Part I and Part II of the Mathematics Tripos in 1937 and 1939. Clarke graduated in 1939, earning a double first in mathematics. Unfortunately, since Cambridge didn’t award women a “full academic” recognition, she wasn’t given a formal degree.

After graduation, Joan Clarke was recruited by Gordon Welchman, one of the top four mathematicians, to work in Bletchley Park. During World War II, England established Bletchley Park, a former country estate, to be the code-breaking center for the Allies. Bletchley Park’s work was highly confidential and most of the information regarding what happened there was not revealed until decades after the war. It is quite possible that there is information about Bletchley Park that is still unknown, given the sensitivity and secrecy of cryptanalysts. Gordon Welchman had been tasked with recruiting talented and shrewd individuals to work at Bletchley. Without giving Joan Clarke any information about her job, she was hired, and when she graduated after her Part III in Mathematics, she began working for the government. 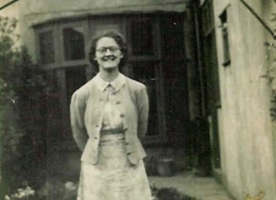 When she arrived at Bletchley Park, Joan Clarke was initially put in Hut 6, the all-women’s hut for clerical work. However, Clarke didn’t stay there for long, as her talents were recognized early on by Alan Turing. Alan Turing, Clarke’s future fiance, was a brilliant man who inspired much of the code-breaking work done in Bletchley Park. His innovative and clever ideas created new ways to solve dilemmas. Turing realized Clarke’s potential once she had completed and mastered a process called Banburismus, a cryptanalyst process to decrypt German messages, something no other woman had done before and most men couldn’t complete so quickly. Clarke and Turing worked closely together, and quite often too. Under Turing’s request, Clarke began to work for Hut 8, where most of the cryptanalysts worked. Clarke was described as an enthusiastic mathematician, clever, and able to figure things out that no one else could. Even though she was paid less due to her gender, Clarke was treated as an equal to her peers in Hut 8 and revered highly. Clarke’s work earned her the position of Deputy Head (the highest position she was allowed as a woman) of Hut 8, though unfortunately sexism denied her any further promotions. While it is now recognized that without Joan Clarke’s monumental achievements at Bletchley Park, the German Enigma—a communication code for Axis forces—may not have been solved so quickly, the true extent of Joan Clarke’s work will likely remain unknown for a very long time.

John Clarke became engaged to Alan Turing in the spring of 1941 upon his proposal. The engagement was short-lived, however, and the two divorced in August of the same year. While it is commonly believed the engagement was called off due to Turing’s homosexuality, that wasn’t the case. Clarke reported to having always suspected his homosexuality and was willing to continue with the marriage. Other factors in their lives, however, prompted them to call the engagement off. Clarke and Turing remained close friends until Turing’s eventual suicide. They kept in close correspondence and Clarke mentioned she always had “warm feelings” for him. Joan Clarke eventually married Lieutenant-Colonel Jock K.R. Murray, a colleague of hers at the Government Communications Headquarters. 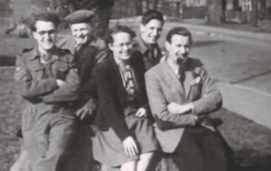 After the war, Joan Clarke continued to work. She worked for the Government Communications Headquarters, a British intelligence agency that continued the mission of Bletchley Park. She worked as a numismatis, someone who works with currency, there until her husband developed poor health. They retired soon after and moved to Scotland, where they developed a shared love for Scottish history. Following her retirement, she continued to help historians research code-breaking. She helped Sir Harry Hinsley write a volume on code-breaking during the war. Joan Clarke died of old age in September 1996.

Joan Clarke can be found in modern media in the movie “Imitation Game,” a movie about the life of Alan Turing in the war era. Though it isn’t completely true to history and dramatized in many aspects, the representation of Joan Clarke as a powerful, intelligent woman who worked hard to succeed is true to its form.

Joan Clarke was a brilliant mathematician, respected and revered by the men in her work. She was an intelligent, enthusiastic woman who made a largely unknown impact during an era of war. Her legacy of intelligence and perseverance during a time in which women were not supported to earn degrees, work for the government, or be promoted, Joan Clarke defied expectations and made a name and legacy for herself.

Why Did I Choose to Research Joan Clarke?

A lot of people aren’t educated on people who worked as spies or code-breakers during the war eras, let alone women who worked as spies. Though Joan Clarke is getting more modern media representation through the movie “Imitation Game”, it is important to speak about her as her own person with her own life and accomplishments separate from Alan Turing. Instead of simply recognizing Alan Turing and the other men who worked on cracking Enigma, it is important to represent and recognize the women just as much. Joan Clarke, and many unnamed females worked tirelessly as codebreakers or mathematicians (Clarke however was the only one who mastered Banburismus). I believe that it is very important for little kids to not only see men who achieved great STEM achievements during the war era, but also women.