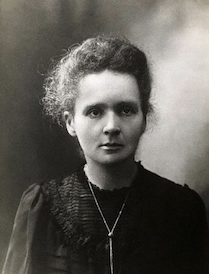 Maria Skłodowska, commonly known as Marie Curie was born on November 7, 1867- in the Russian occupied city of Warsaw, previously known as Poland, to a family of educators - Władysław Skłodowski and Bronisława Skłodowska. Curie was the youngest of five children: Zosia, Jozef, Bronya, and Helan.

The Russians occupying Warsaw where Curie lived wanted to systematically erase Polish culture, so it was illegal to speak Polish or read Polish literature; however, Curie’s parents were Polish patriots and taught Marie and her siblings how to read and speak the language despite its illegality. Her father, Wladyslaw, was a Math and Physics instructor. He was eventually fired for his patriotism, causing them to transform their house into a boarding school for boys.

When Curie was seven, her older sister died from typhus and, three years later, her mother died of tuberculosis. After her mother’s death, Marie was enrolled in school. She was the youngest student there but succeeded in her classes. When Marie was sixteen, she graduated with the highest grades in all of her subject areas, making her valediction from pursuing higher education.

However, Curie’s perusal of higher education was impossible because the Russian government occupying Warsaw banned women from attending the University of Warsaw, or attaining any form of higher education. Marie was determined to not let this stop her, so she and her sister Bronya started attending an illegal, underground university called the “Floating University.” Eventually, Marie and her older sister made plans to go to college in Paris, where women were accepted. The plan was that Bronya would go to medical school while Marie would work to support them financially, and when Bronya graduated, she would return the favor and support Marie financially.

In late 1891, Marie left Poland to study at the University of Paris; there, she studied Math, Chemistry, and Physics. Marie had to live in an attic during her time at the university because she could not afford better housing. 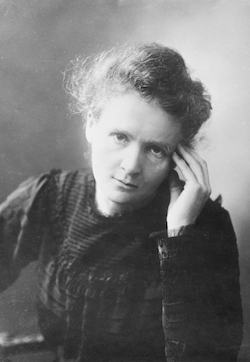 She obtained her first degree two years after enrolling in the University (1893) for physics and got her second degree a year later (1894) for chemistry. After getting her second degree, she was commissioned by The Society for Encouragement of Natural Industries to study the magnetic properties of steel, but she didn’t have a lab or place to run such experiments. She was advised to seek help from Pierre Curie, a famous instructor at the School of Physics and Chemistry at the University of Paris. Marie and Pierre eventually fell in love and got married on July 26, 1895.

The same year in which the Curies got married, Wilhelm Röntgen, a German mechanical engineer and physicist, discovered X-rays and published a paper about the phenomenon. His research inspired Marie to divulge further into the discovery for her Ph.D. thesis She used the electrometer that Pierre had created fifteen years earlier, to detect small amounts of electricity and found that uranium electrified the air. She also found out that the quantity of uranium present in the air affected how much electricity is produced. Then she found that a uranium mineral, pitchblende, was four times more reactive than uranium and began to question if other reactive substances were present in pitchblende.

Later that year, Marie and her husband published a paper that announced the existence of a new element, polonium. The name was selected to honor Marie’s home country Poland, and in December, they announced the existence of another element, radium. During her research, Marie coined the term “radioactivity” which is the emission of ionizing radiation or particles caused by the spontaneous disintegration of atomic nuclei.

In 1903, Curie became the first woman to ever receive a Nobel Prize; she was awarded alongside her husband and Henri Becquerel for their research on radiation. Three years later, Pierre died in a tragic accident (he was hit and run over by a horse-drawn carriage). The following month, the University offered Marie, her husband’s former teaching position. Marie accepted it, although she was extremely depressed, and still in mourning of her spouse’s death. The acceptance of the role made her the first woman professor at the University of Paris. 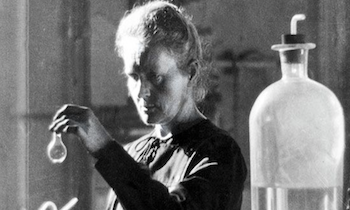 In 1914, during the outbreak of World War I, Marie realized an urgent need for x-rays, so that soldiers’ and other wounded civilians’ injuries could be detected quickly. Therefore, she directed the installation of twenty mobile radiography labs.

Marie died on July 4, 1934, at the age of 66, from the unknown effects of radiation. No one knew that the radiation was possibly dangerous, and modern historians suspect that high exposure could have caused her death. In 1995, Marie and Pierre's remains were interred in the Panthéon in Paris, the final resting place of France's greatest minds. Marie became the first and one of only five women to be laid to rest there.

Why Did I Choose to Research Marie Curie?

I chose to research Marie Curie because she is a notable woman whose contribution to Chemistry and Physics made several discoveries in science possible. Curie surely is an inspiration to all women that they should strive to achieve excellence regardless of their circumstances. The discoveries made by Curie made several scientific innovations occur and for that she deserves recognition.