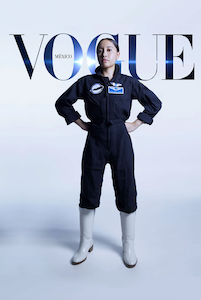 Katya Echazarreta was born in 1926 in a western Mexico city called Guadalajara. Even at a young age, Echazarreta was captivated by space, math, astronomy, and physics, and she carried these passions into her adulthood. Growing up in Jalisco, she was discouraged by much of her family and teachers, who advised her to abandon her dreams of going to space. Her mother was the only person who supported her, as she encouraged her daughter to follow her passions from the time she was a little girl, which fostered a strong work ethic in Echazarreta. When she was seven, Echazarreta and her family migrated to the United States and settled in San Diego, California. Growing up speaking Spanish, she initially found it difficult to adjust to the environment and communicate with others due to the language barrier. However, within two years, she became fluent in English. To support her family, she spent five years of her early adulthood working at McDonald's. She was one of her family's primary sources of income during this time.

After Echazarreta graduated high school, she enrolled at a community college San Diego City College to study electrical engineering. After three years, she transferred to the University of California, Los Angeles (UCLA) to earn her Bachelor’s degree in electrical engineering. While at UCLA, Echazarreta had the opportunity to intern at the Jet Propulsion Laboratory (JPL) at the National Aeronautics and Space Administration (NASA) during the spring quarter. Before interning, Echazarreta taught herself how to use the softwares her field utilizes, all while working at McDonald’s. Although she was not accepted for the software position she initially applied for, NASA offered her an electrical position instead. While working as a NASA intern, Echazarreta graduated from UCLA with a Bachelor’s in electrical engineering. From there, she worked full-time for four years as an engineer for five NASA missions, including Europa Clipper Ground Support Equipment and Perseverance. 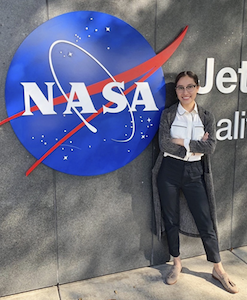 On June 4, 2022, at 26 years old, Echazarreta’s dream became a reality. She became the first Mexican-born woman and one of the youngest to travel to space. Blue Origin, an aerospace manufacturing company, owned by American billionaire Jeff Bezos, launched its fifth group of passengers, including Echazarreta, into space. While most passengers aboard paid an undisclosed amount to secure a seat on the spacecraft, Echazarreta won hers. Out of over 7,000 applicants from over 100 countries, the non-profit organization Space for Humanity chose to sponsor her. In West Texas at 6:26 A.M. PDT, a white, thimble-shaped capsule called the New Shepard launched from a pad and reached the edge of space in under five minutes.

Aboard the New Shepard rocket with five other passengers–Victor Vescovo, Jaison Robinson, Victor Correa Hespanha, Hamish Harding, and Evan Dick–a moment of microgravity was experienced among the group at the border between Earth and space. Reaching an altitude of 66 miles (106 kilometers) and spanning for ten minutes, this sub-orbital experience was one to remember before parachuting into a desert. During this trip, Echazarreta carried the Mexican flag. This flight was part of Blue Origin’s aims for space flight tourism and funds to include diversity in space travel, which has historically been dominated by white men–including Elon Musk’s SpaceX and Richard Branson’s Virgin Galactic. 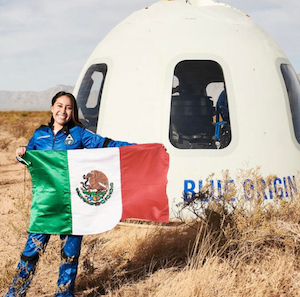 Throughout her experience as a woman in engineering, Echazarreta noticed the lack of women present in her field. She did not have the option to converse with many individuals for advice because of the distinct experiences people can have because of their background as well as the implicit biases that women face daily. With Echazarreta’s own resources, she developed an outlet to encourage women to pursue a career in STEM and aid them through the challenges they may face. She has offered advice and shared her own experiences to help those individuals who are experiencing difficulties in their career through videos. She hosts her own talk show on YouTube known as “KatVoltage” to shed light on her life as a full-time electrical engineer and act as a guide for other students who want to pursue a career in her field. Echazarreta created her YouTube channel to help students who want a career in her industry and steer them in the right direction. She developed this avenue because she did not have the option to seek guidance from others when she was starting out. In addition, Echazarreta uses her social media platforms to educate others on STEM and her experiences as a woman in the space industry.

Currently, Echazarreta is pursuing her Master’s degree at John Hopkins University part-time, growing her YouTube channel “KatVoltage” and other social media, and working full-time as an electrical engineer at NASA.

Why Did I Choose to Research Katya Echazarreta?

At eight o’clock on a weekday, I was sitting on the couch as the news rolled. I was scrolling aimlessly on my phone until I heard the words: “first”, “mexican-born woman”, and “space”. My head turned to the TV, and I saw Katya Echazarreta. Seeing the headline, my jaw dropped, and my lips turned into a smile. Watching the broadcast, I perpetually smiled and I felt immensely proud. Someone with a similar background as other women and myself, I couldn’t stop feeling so content! The fact that she is also Mexican like myself and she’s pursuing a career in STEM–at NASA for that matter–was truly inspiring, and the steps that she has taken in the past to support other women who have the same dream as her was also encouraging. How hard she had to work to get to that moment was genuinely stimulating in my eyes, and I can’t wait to see what she achieves in the future!

‌Woods, Kathia. “Watch: Katya Echazarreta Made It to Space & Said It 'Changed My Outlook on Life'.” Remezcla, 7 June 2022, https://remezcla.com/culture/watch-katya-echazarreta-made-it-to-space-blue-outlook/?amp.