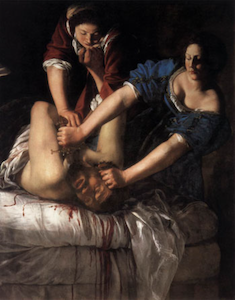 Artemisia Gentileschi was born in 1593 in Rome, Italy. She was the eldest child in her family with three younger brothers, and spent her childhood in Rome. Her mother Prudentia di Monotone Gentileschi died in childbirth, making Artemisia the sole caregiver for her younger brothers. Artemisia did not receive formal education but quickly gained an exceptional grasp on an artistic education.

Her talent was evident in even her earliest drawings. Artemisia’s father, Orzaio Gentileschi, was an artist who recognized and supported Artemisia’s artistic talents. Unlike the majority of celebrated baroque painters, Gentileschi was a woman and, therefore, was unable to study art in the spaces her contemporaries shared. Despite her lack of societal access, Artemisia developed her artistry in her father’s studio. Under his training, she soon reached a level of skill that, despite having unequal opportunities than those of her contemporaries, prompted her father to state that Artemisia “has no peer.” By the age of fifteen, Artemisia had begun to paint grand scale works professionally.

In her father’s studio, Artemisia studied his paintings and their features, using a mirror to produce her own facial features onto the female subjects in her paintings. The detail and complexity Artemisia brought to these female subjects was lacking in Baroque paintings, which were known to have unrealistic proportions of women and to have been made in the image of the “male gaze.” Artemisia, with her great technical grasp, was able to disrupt these limited representations of women with realistic supplements. 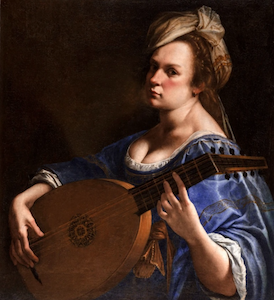 In Artemisia’s artwork lay seeds of resistance. At the time of her career, depictions of women in art were often solely ones of domesticity and passivity. In one of Gentileschi’s most notable works Judith Slaying Holofernes, depictions of oppositional strength challenge societally “normal” limiting depictions. Artemisia painted Judith with controlled hands, strong arms, and a determined face; Judith’s expression reads just as aggressive as it does composed. In Artemisia’s work, female subjects are given characteristics typically reserved for men. By representing women as active, dynamic participants of life rather than passive subjects, Artemisia disrupted existing conditions of art and permanently altered them.

Artemisia, with her transcendent thought and talent, was not free from the conditions of her time, which normalized the sexual abuse of women and excused male violence. Artemisia was raped by her father’s student, Agostino Tassi, who was brought to trial by Artemisia’s father. It was unusual for a rape case to be prosecuted during this time, and Artemisia’s father’s assistance was the major force behind the trial of the case. The trial took place in Rome and lasted seven months. During the trial, a teenage Artemisia asserted her testimony in a courtroom, and within a society that was not in favor of legitimizing women’s experiences of abuse. The torture Artemisia was subjected to in efforts to validify her testimony is largely indicative of the barriers facing women’s liberation. Although Tassi was found guilty, he was only reprimanded on the basis of honor, and thus able to easily function in his sentenced, societal exile. 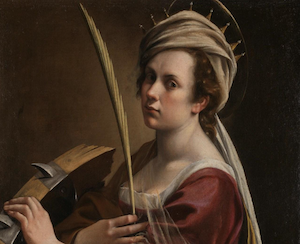 Following her trial with Tassi, Artemisia was married to Pierantonio Stiattesi, per her father’s arrangement. Shortly after her marriage to Stiattesi, Artemisia moved to Florence and made history as the first woman accepted into Florence’s Academy of Design (Accademia delle Arti del Disegno). Artemisia's entrance into the academy in 1616 signaled a major triumph for women artists. Artemisia's paintings circulated much of the European elite, including the Medici family, King Charles I of England, the Grand Duke of Tuscany, and Philip IV of Spain. Among the paintings she produced during this time was her iconic Judith Slaying Holofernes. During her time in Florence, Artemisia gave birth to five children, only three of them surviving infancy and only one of them reaching adulthood. Artemisia continued to paint while pregnant and as a mother to young children.

Artemisia returned to Rome after separating from her husband. Here, she continued to support herself with her art, which was extremely unheard of for a woman in the seventeenth century. Artemisia moved to Venice and then to Naples, where she ran an art studio and resided for the remainder of her life. From what has been hypothesized by scholars, Artemisia died in 1656 in Naples from the plague that swept the area.


Why Did I Choose To Research Artemisia Gentileschi?

Artemisia’s life story and artwork has not left my mind since I first learned about her in a course covering representations of women and girls. I had knowledge of women’s absence from art history prior to this course, but I did not understand the extent to which women artist's talents have gone underrepresented, particularly in the Baroque period. The adversity Artemisia faced in relation to sexual abuse and barriers to representation and artistic inclusion remains widely relevant today; Artemisia’s story is one that resonates deeply with contemporary feminist movements, particularly within the emergence of #MeToo.

I am deeply inspired by the work of feminist art historians, namely Linda Nochlin, who vehemently advocated for the resurgence and recognition of women artists within the canon of art; without these historians, I would not know about Artemisia, and would not have the opportunity to share her brilliance.

Nochlin, Linda. “From 1971: Why Have There Been No Great Women Artists?” ARTnews, 30 May 2015, https://www.artnews.com/art-news/retrospective/why-have-there-been-no-great-women-artists-4201/.