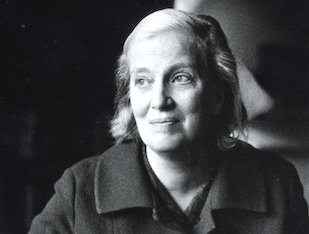 Born in Cairo, Egypt on May 12, 1910, and raised in Sudan, Hodgkin grew up to parents interested in archaeology and rare antiquities. Hodgkin, however, discovered her interest in crystals at the early age of 10, when Dr. A.F. Joseph gave her chemicals and helped her analyze ilmenite. Her secondary school education at the Sir John Leman School deepened this interest, and she was one of only three girls who joined the boys in chemistry. While still maintaining a love for archaeology, even spending a gap year before college excavating Jerash and drawing mosaics, she eventually found she could not relinquish chemistry’s hold on her. Even while excavating Jerash, Hodgkin was using chemistry to analyze the glass tesserae with E.G.J. Hartley.

Hodgkin began her secondary education at Oxford and Somerville College from 1928-1932. There, she listened to a lecture by J.D. Bernal, and a short-lived interest in metals was piqued. After Oxford, she spent two years working with him at Cambridge. Already having experience in a lab as a research assistant with H.M. Powell studying thallium dialkyl halides at Oxford, this was a perfect opportunity, and it helped her later get chosen for a research fellowship from 1933-1934. However, given advice from her tutor F.M. Brewer to research x-ray crystallography, she later changed fields. With research assistance from Rockefeller and Nuffield Foundations, Hodgkin collected money for an x-ray apparatus to study the 3-dimensional structures of biochemical compounds.

In 1937, Dorothy married Thomas Hodgkin, a scholar of the history and politics of Africa and the Arab world. She continued her history of hard work and dedication to her field and studied Penicillin hydrochloride (a bacteria that fights infections) in 1942, then vitamin B₁₂ in 1958 (which she later earned a Nobel Prize in Chemistry for in 1964, given its highly complex structure of over 100 atoms). Officially, the Nobel prize was awarded “for her determinations by X-Ray techniques of the structures of important biochemical substances.” On top of this accomplishment, she studied insulin, the hormone that absorbs glucose, for over three decades until she successfully determined its structure. Not stopping there, she traveled around the world- specifically China, USA, and the USSR, giving lectures on its importance regarding diabetes. 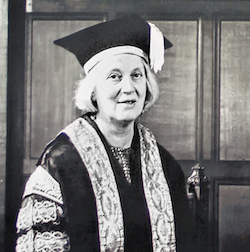 Hodgkin did not just conduct research, although it is what she is best known for. Throughout her career, she also worked as a university lecturer, demonstrator, and reader for x-ray crystallography. Having built a reputation, Hodgkin was elected a fellow of the Royal Society, and a foreign member of both the Royal Netherlands Academy of Science and the American Academy of Arts and Sciences. Then, from 1976-1988, she served as President of the Pugwash Conferences on Science and World Affairs. As awards for her accomplishments, in addition to her Nobel Prize, Hodgin received the Order of Merit in 1965 (the second woman to receive it, after Florence Nightingale), the Lenin Peace Prize in 1987, and the Copley Medal in 1976 as the first female recipient.

Hodgkin unfortunately passed away from a stroke on July 29, 1994. Her health was a persistent struggle throughout her career—she was diagnosed with rheumatoid arthritis at the age of 24, and as it worsened over time, she eventually became wheelchair-bound, all while remaining active in science. However, her friend Henry Moore saw the beauty of her hands. While she was alive, she became the subject of his series of lithograph drawings. 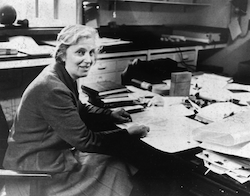 It is important to note that her legacy lives on. Issued in August 1996, British stamps featured Hodgkin as a “woman of achievement.” For the 350th anniversary of the Royal Society, they produced stamps of their most acclaimed members, including Hodgkin. Her name is also honored by the Sir John Leman School, her former secondary school, in their science block. She has her name gracing English institutions, including Bristol University, Keele University, King’s College in London, among others. As a whole, Hodgkin’s discoveries of molecular shapes helped the scientific community advance toward knowing how these molecules react with others and their properties- ensuring scientists can use them accurately. Because of her work with penicillin and insulin, the medical community was revolutionized and able to save the lives of countless people. However, science was not Hodgkin’s entire life- she also had three kids, who later had three grandchildren. Her first son, Luke, was a mathematician who taught at the University of Warwick until he passed in 2020. Her daughter, Elizabeth, followed in her family’s long-standing footsteps of studying history, even teaching it at an all-girls secondary school in Zambia. Her second son, Toby, pursued agriculture and studied at Newcastle.

Why Did I Choose to Research Dorothy Hodgkin?

I first learned about Dorothy Hodgkin when I was a kid and saw a Google Doodle dedicated to her 104th birthday. At the time, the fascinating structure of Penicillin featured in the image caught my attention, but years later, I heard her name again in a science class and was able to understand just how amazing her work truly was. For this article, I chose Dorothy Hodgkin because I wished to share her story with others, just as it was with me.

Weidman, C. (2019, May 12). Meet Dorothy Hodgkin, the biochemist who pieced together penicillin, insulin, and Vitamin B12. Massive Science. https://massivesci.com/articles/dorothy-hodgkin-facts-penicillin-insulin-vitamin-b12-folate-cobalamin-antibiotic/.