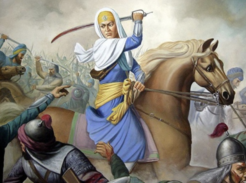 Mata Bhag Kaur, more famously known as Mai Bhago Ji, was the first-ever woman in Sikh history to fight in a war. She was born in 1666 in Chabal Khan, India. In Chabal Khan, Mai Bhago Ji was brought up in a Sikh family with religious beliefs and values. She lived with four other family members: her grandfather, her father, and her two brothers. Her father, Malo Shah, was enrolled in the army during the time and her mother was known to have passed away when she was very young. Her grandfather, Bhai Pero Shah, was the younger brother of a famous chief of 84 villages. As a child, her dad often took her to the Gurdwara (religious Sikh temple) and taught her how to use weapons due to his military background.

There are no sources that provide information regarding Ji’s education. When she grew older, Ji married Nidhan Singh, who was from an old city in Punjab, India, called Patti.

Ji’s passion for fighting began in childhood when she often spent lots of time with her father, who taught her horse-riding, sword-fighting, and other forms of combat. During her adulthood, the Mughals, who were a large empire that ruled most of India and Pakistan at the time, demanded that Sikh villagers must evacuate their village in order for them to obtain food and other necessities. The Mughals were predominantly Muslims and Hindus. In 1705, the Mughal soldiers told the villagers that whoever would say, “I am not Guru Gobind Singh Ji’s Sikh” (the tenth Guru of Sikhism) would not be punished, hurt, or killed. However, those who decided to stay would be brutally murdered. Eventually, forty Sikhs decided to tell the tenth guru (Guru Gobind Singh Ji) that they will no longer remain his Sikhs. 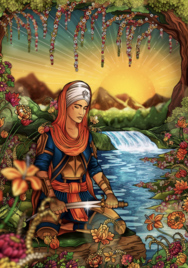 After hearing this news, Mai Bhago Ji was extremely upset and decided to convince these 40 Sikhs that what they were doing was wrong. She eventually persuaded this group to apologize to Guru Gobind Singh Ji. Though this act is controversial, it shows her devotion to Sikhism. During this time, a war had broken out between Mughals and Sikhs, in which the Guru lost all his sons. Mai Bhago Ji set out in this war and fought with other men against the Mughals. By the time the Guru returned to war, every one of his soldiers was dead except for Mai Bhago Ji. The only female.

After the war, Mai Bhago Ji was extremely injured and returned with the Guru to protect him as his bodyguard. After the guru passed away, she moved to Jinvara, India where she practiced meditation until her death in 1708.

Her death did not inhibit her legacy; as mentioned previously, she is the first woman in Sikh history to fight in war. In fact, she told her husband to stay at home while she fought for justice and freedom. Her story is very inspiring for many young Sikh girls. Numerous colleges, professional schools, and teams have been named after her in India, such as the Mai Bhago Armed Forces Preparatory School. In fact, there’s even an Armed Forces named after her! Moreover, she became the bodyguard of the tenth guru of Sikhism. To this day, her accomplishments continue to be recognized all over the world. Mai Bhago Ji is a prime example of fighting for what you believe is right and not depending on others to fight for you.

Why Did I Choose to Research Mai Bhago Ji?

Mai Bhago Ji is someone I look up to and is a great role model for many young women. Moreover, her actions and accomplishments are very inspiring as they show no matter what circumstances you are under, you can always fight for yourself and what you believe in. I personally want to shine a spotlight on her great work and spread her message and bravery to other women.