Frances Oldham Kelsey was born on July 24, 1914, in British Columbia, Canada. Born to a retired British army officer and a Scottish mother, Kelsey grew up as an intelligent child with immense curiosity. She graduated from St. Margaret's School in Victoria, British Columbia at the young age of fifteen and attended the University of Victoria, a two year institution, before enrolling at the McGill University in Montreal. At McGill University, Kelsey studied pharmacology, the study of drug or medication action. She earned her bachelor's degree in 1934 and a master’s degree the following year. 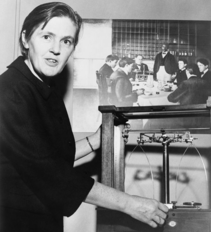 Encouraged by a McGill University professor, Kelsey applied for a relatively new doctoral program at the University of Chicago to further her studies in pharmacology. Kelsey was accepted into the program upon a letter addressing her as “Mr. Oldman.” Eugene Geiling, a pharmacology professor at the University of Chicago, mistook Kelsey for a man because of her first name, Frances. Kelsey contemplated telling the professor that she was a woman, but she decided against it because as she stated in an interview, “When a woman took a job in those days, she was made to feel as if she was depriving a man of the ability to support his wife and child, but my professor said: ‘Don’t be stupid. Accept the job, sign your name and put “Miss” in brackets afterward.” Although faced with a gender barrier upon entering a male dominated field, Kelsey moved to Chicago to further her academic career.

During her time at the University of Chicago, Kelsey was part of a research team that helped the Food and Drug Administration (FDA) look into a new antibacterial drug named elixir sulfanilamide that was linked to 107 deaths, most of whom were children in 1937. Their investigation found the drug to contain chemicals similar to ones used in antifreeze as well as a liquid substance which is heavily toxic to humans. Due to this incident, the Federal Food, Drug and Cosmetic Act of 1938 was created to regulate and mandate companies to show evidence that their product was safe to use. Following her research, Kelsey graduated with a PhD in pharmacology in 1938 and accepted a teaching job offered by the University of Chicago. She went on to marry fellow researcher Fremont Ellis Kelsey at the University in 1943 before enrolling at University of Chicago’s medical school. 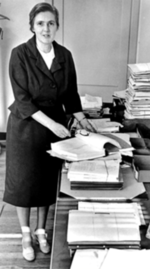 Kelsey graduated medical school in 1950, giving birth to two daughters during her years there. Her family relocated to South Dakota after her husband accepted a faculty position at the University of South Dakota's School of Medicine. She earned a teaching position at the university and continued to practice medicine as a physician in remote communities within the state.

In 1960, Kelsey was hired as a medical officer by the Food and Drug Administration. As a medical officer, Kelsey reviews applications from pharmaceutical companies for new drugs. Kelsey, being a new member on the team, was given her first file from a Cincinnati based company, William S. Merrell. Their application concerned a new over-the-counter sedative drug, thalidomide, with the trade name Kevadon. It was supposed to be an easy case, as thalidomide was being widely used by many European countries. The sedative with anti-nausea properties was highly marketed toward pregnant women in dealing with morning sickness. Upon reviewing Merrell’s application, Kelsey found that the toxicity and laboratory animal testing did not meet the guildness for human use and rejected the apllication. She demanded more evidence and testing to confirm that thalidomide was safe to use. Merrell continued to send in applications, which Kelsey continuously denied because of lack of data. Frustrated by the continuous rejections, representatives from Merrell went to Kelsey’s office to complain and call her a “petty bureaucrat.” 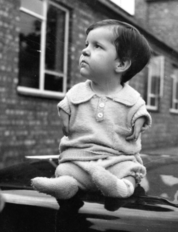 After a long battle with the company, evidence of the dangers of thalidomide began emerging overseas in 1961. A British physician published a journal claiming patients who had taken thalidomide had been experiencing tingling pain in their arms and feet. Kelsey also had found out that Merrell did not include any warnings of side effects of thalidomide which was included in the thalidomide products in Europe. Months later, a German newspaper published an article stating that the use of thalidomide is associated with the sudden increase in babies born with severe birth defects, miscarriages, and stillbirths. Thalidomide also became linked with phocomelia, a genetic mutation that occurs in 1 in 4 millions births where infants are born with flipper-like feet and hands, missing limbs, underdeveloped organs, and other birth defects. This caused a recall to all prescription drugs associated with thalidomide in Europe. Although thalidomide was not part of the United States drug market, it has affected over 10,000 infants with birth defects and disabilities in Europe.

Kelsey’s research back in college had also raised suspicion of thalidomide. She saw that Merrell did not conduct any testing on pregnant mammals, but the substance was marketed toward pregnant women. At this time, there was the prevailing belief that the placental served as a protective barrier from substances like alcohol, tobacco, and illegal drugs. Kelsey, who researched the effect of drugs on pregnant mammals, concluded and found that drugs do pass through the placental and to the fetus. Kelsey preserved in rejecting applications, and eventually Merrell pulled out of any further applications to sell thalidomide. In the United States, seventeen babies were affected by thalidomide, as Merrell had sent out over 2.5 million samples of thalidomide to physicians while still being investigated by the FDA. 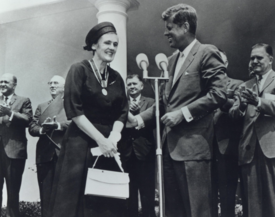 France Oldham Kelsey was recognized for her work in July of 1962 on a front page article in The Washington Post. Later, she received the President's Award for Distinguished Federal Civilian Service by former President John F. Kennedy for “her exceptional judgment in evaluating a new drug for safety for human use.” Kelsey was invited to the White House as President Kennedy signed the Kefauver-Harris Amendment to the U.S. Food and Drug Act. This new amendment, which Kelsey helped draft, enforced more rigorous testing for the safety and effectiveness of drugs. Kelsey was awarded many other honorary awards during her lifetime. She was induced into the National Women’s Hall of Fame in 2000. In 2010, she received the Dr. Frances O. Kelsey Award for Excellence and Courage in Protecting Public Health by Commissioner Hamburg of the FDA, an award created in honor of Kelsey.

“She had a huge effect on the regulations adopted in the 1960s to help create the modern clinical trial system,” stated Daniel Carpenter, a professor at Harvard University. Kelsey continued to work for the FDA as she was named chief of FDA’s investigational drug branch in 1963. Years later, she became the director of the Office of Scientific Investigations, a position she held for 28 years until 1995. She continued to work for the FDA at the age of 81 with less demanding work until retirement at the ripe age of 90. Frances Oldham Kelsey died on August 7, 2015, in London, Ontario at the age of 101 due to natural causes. Although her influence and work is rarely known, she will be forever honored for her essential role in drug safety and regulations that shaped how drugs are used today.

Why Did I Choose to Research Dr. Frances Oldham Kelsey?

My interest in toxicology led me to researching prominent women in the field. Frances Oldham Kelsey intrigued me by all her hard work and achievements, especially during a time where highly educated women were discouraged and not prevalent. She prevented a major spread of birth defects in the United States when many peers doubted her abilities. She inspires me to overcome my limitations and strive to become the best.

‌[Dr Kelsey is seen as a hero by many across the US for raising concerns about the safety of thalidomide]. (n.d.). BBC. https://www.bbc.com/news/world-us-canada-33831451

‌McNeill, L. (2017, may 8). The woman who stood between America and a generation of 'Thalidomide Babies' how the United States escaped a national tragedy in the 1960s. Smithsonian Magazine. https://www.smithsonianmag.com/science-nature/woman-who-stood-between-america-and-epidemic-birth-defects-180963165/