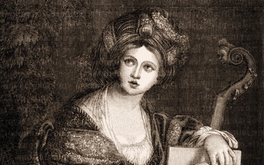 Anna Komnene, also known as Anna Comnena, was born to the Byzantine emperor Alexios I Komnenos and Empress Irene Doukaina in 1083 as the sole heir to the Byzantine throne. She was born in Constantinople, the capital city of the Byzantine Empire, now known as Istanbul. As the heir, she was promptly married off at a very young age to the son of Emperor Michael VII Doukas, Constantine Doukas, in hopes they would produce an heir to the throne and secure the family line. Komnene was happy with this marriage, describing her husband as “seemingly endowed with a heavenly beauty not of this world, his manifold charms captivated the beholder, in short, anyone who saw him would say, He is like the painter’s Cupid” (Cartwright, 2018). At this time, the young couple was almost certain of their impending rule, and Anna, as a royal, spent a lot of time preparing. Anna and Empress Maria, her mother-in-law, grew extremely close during their time together. Like most princesses of her time, she was educated in several subjects, including math, philosophy, medicine, astronomy, literature, history, military strategy, and music. To pursue higher learning in philosophy, even though she was discouraged from doing so, she secretly hired a tutor, Michael of Ephesos, to teach her more philosophy, most notably, Aristotle. Overall, she had a happy life spending time with her father and looking forward to ruling the throne alongside her husband. like many women in her family before her.

However, this all changed when her mother gave birth to a healthy son in 1087 C.E., John II Komnenos, who became the new heir to the throne. Anna became jealous of her brother, but stayed hopeful of taking the throne one day. Although it is difficult to understand the hatred Anna felt towards John II, it is important to contextualize Anna Komnene’s perspective. From her birth, it was clear she was of royalty, which shaped her worldview. She was born in the Porphyra chamber, a “purple room” in the palace that was lined with porphyra stone that designated those of imperial blood. Those born there were referred to as “porphyrogenita,” with purple being a royal color. In addition, the Byzantine history that she studied was filled with Byzantine empresses who ruled with great power, most notably, seven empresses that ruled as regents and two that even ruled alone. She also saw while growing up that her father, Alexios I, gave great power to her grandmother Anna Dalassene while he was away. She also saw the dynastic strategizing done by her mother in law, Maria, to get her family more power. Considering the power given to women in the past of the Byzantine Empire, Anna Komnene had big ambitions while being Empress, which were all taken away the minute John II was born. 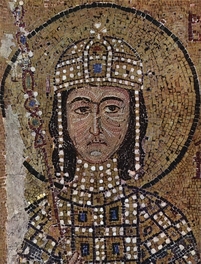 In 1097 C.E., Anna’s husband, Constantine, died while she was only 14 years old. Despite her young age, she immediately married Nikephoros Bryennios the Younger, a statesman and general of her father’s empire as part of a political union. Throughout their 40 years of marriage, they had four children, and she was generally happy in their relationship. At around the same time, her beloved father fell ill, and her mother, Irene, was given more power over the administration. Previously, due to Anna Komnnene’s interest in medicine, Alexios had built a 10,000 person capacity hospital and orphanage in her honor in the main city of Constantinople. Having medical experience from learning and teaching at that hospital and others, Anna tried her best to treat her father as he was dying. Despite all her efforts, Alexios I Komnenos died in 1118 C.E., and her brother became Emperor John II Komnenos. Before he died, there were several rumors of Anna’s alleged efforts to persuade her father to disinherit John II as his heir. Furthermore, It is rumored that her mother, Empress Irene, and her grandmother, Anna Dalassene, attempted to get Anna Komenene on the throne by naming her husband Nikephoros as the heir. When this did not work, they tried to get Nikephoros to overthrow her young brother as soon as he became Emperor and ascend the throne. However, this also did not work since Nikephoros was very loyal to the emperor and would not participate in the plot. These treasonous plans were discovered by John II, and Anna was immediately relieved of her estates and possessions and sent to live elsewhere. Once her husband died in 1137 C.E, she and her mother Empress Irene were banished to the convent of the Virgin Kecharitomene, which was established by her mother years ago.

While at the convent, Anna Komnene wrote the Alexiad, the work for which she is still celebrated today. Filled with incredible detail beginning in 1069, it discusses historical events all the way up to 1118, when her father had died. She began writing it in 1137, when her first husband died, and worked on it at the nunnery up until the 1140s. The Greek epic covers the Komnenos’ rise to power, wars against the Normans, Scyths, Cumins, and Turks, the First Crusade (1096-1104), the Norman invasion of Byzantium in 1105, and more news, including several military conquests and infamous religious heretics. It is composed of 13 volumes and focuses heavily on her father, whom she admired greatly, and his 37 years of Byzantine rule. In order to justify her authorship of this epic, she describes herself as “on a par with any man” and expressed in the Alexiad her royal birth and claim to the throne as an imperial. 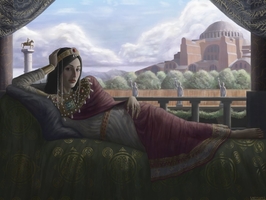 Some inaccuracies in the book involve minor chronological errors, but it is mostly criticized for its blatant and abundant praise of Alexios. Of this, Anna writes, “And truly when writing this… I forgot that it was my father’s deeds that I was describing. In my desire to make my history free from suspicion, I often treat my father’s doings in a cursory way... I should not like to afford the public a suspicion that in my eagerness to speak about my relations I am serving them with fairy tales! Indeed very often I recall my father’s successes, but… I pass lightly over my father’s misadventures…let my father’s woes be a subject of marvel and lamentation to me alone.” Her feelings toward her brother are also blatant in the work as there is little to no mention of his reign, despite it being one of the most successful ones in Byzantine history.

Despite these inaccuracies, Anna filled the Alexiad with incredibly detailed depictions of several important figures at the time, meetings with people at court, and descriptions of her father’s military exploits. Her vivid memories include invaluable information about the First Crusade and its main leaders. In the book, she also included her extensive knowledge about military strategy, science, and astronomy. In addition, her book contains several references to the many powerful women she was surrounded with, including her mother and grandmother.

Her work is described in relation to studies conducted about the First Crusade, “no study of that enterprise is complete without an analysis of the information she supplies.” At her funeral, an orator described her as, “A woman wiser than men in words, more manly in acts, more firm in plans, more prudent in tests…a woman enriched by three eyes of perception, those of her natural perspicacity, of scientific penetration and of consummate experience.” Known widely as the first female historian, Anna Komnene is the source of a great many things we know about the time period of which she wrote, and a testament to the powerful women who existed within the Byzantine Empire.

Why Did I Choose to Research Anna Komnene?

In ninth grade, my A.P. World History teacher was asked who she would like to be if she could choose anyone in history. She replied that she would have liked to be a Byzantine princess. My teacher said that the Byzantine Empire had a rich history of strong female leaders and she would have enjoyed many rights as well as live in a very successful empire. Since then, I have always been interested in the powerful women in Byzantine history, and decided to research Anna Komenene after reading some brief history about her on the internet.