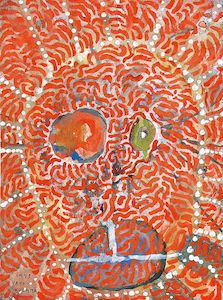 Yayoi Kusama was born on March 22, 1929, in Matsumoto, Japan. Her family consisted of wealthy merchants that operated a seed and plant nursery farm. Although money was not an issue, she had a troubled family life and childhood. Her mother was physically and verbally abusive and disapproved of her painting, and she would often send Yayoi to spy on her father, who was a philanderer. This caused her to suffer from sexual anxiety later in life.

At the age of ten, Kusama began to experience vivid hallucinations, which involved bright flashes of light, fields of flowers, and pumpkins, all speaking to her. Around this time, she started painting, most likely as a psychological response to the fears that stemmed from her hallucinations. Her first painting was a Japanese woman in a kimono covered in dots and nets, a pattern that would become popular in her artwork.

Kusama had little formal training in the arts. She studied briefly at the Kyoto City Specialist School of Arts from 1948-1949. Before this training, in 1946, her first pumpkin artwork, a Nihonga-style painting, was exhibited while on a traveling exposition in Matsuomo. She had her first solo show in Japan in 1952 and in 1957, she decided to move to New York to establish herself as an artist. All she brought with her was a couple hundred dollars sewn into her dresses, 60 kimonos, and some drawings that she planned to sell. Before moving to New York, Kusama destroyed many of her earlier works.

While in New York, Kusama claimed her ideas were appropriated and stolen by the male artists around her, which is debated by modern art historians. Throughout the 1960s, she continued working as an artist in New York. In 1963, she started making chairs and other objects with white phallic forms of stuffed fabric to try to heal her feelings of disgust and anxiety towards sex that stemmed from her childhood. 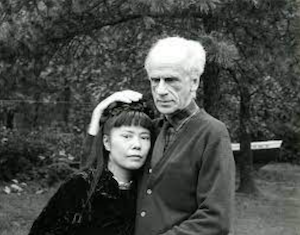 Kusama had relationships with other artists but never married or had kids. The most notable of these relationships was with Joseph Cornell. Cornell made surreal boxes of found objects. He was in his 50s, lived with his mother, and was obsessed with Kusama, sending her dozens of poems a day. Ten years after they met in 1962, Cornell died at age 69. Following the death of both her father and Joseph Cornell, Kusama moved back to Japan in 1973. Four years later, in 1977, she admitted herself to a mental hospital. For her, the psychiatric hospital represented a new start and a chance to turn her mania into creativity. While in the hospital, she made art. This art included surreal poetry and fiction, such as The Hustlers Grotto of Christopher Street (1984) and Between Heaven and Earth (1988). During the late 1980s, her work gained widespread recognition after several solo exhibitions at world-renowned art museums in Oxford, England, and New York City.

In 1993, Kusama returned to the public eye when she represented Japan at the Venice Biennale. There, she presented the Mirror Room (Pumpkin), an installation in which she filled a mirrored room with pumpkins covered in polka dots. Between 1998 and 1999, a major retrospective of her works was shown at the Los Angeles County Museum of Art, MOMA, Walker Art Center in Minneapolis, and Tokyo’s Museum of Contemporary Art. 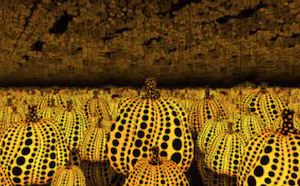 In 2006, Kusama had the immense honor to receive the Japan Art Association's Praemium Imperiale prize for painting, presented on behalf of the Japanese Imperial Family. In 2012, her work was the subject of a major retrospective at the Whitney Museum of American Art in NYC. Kusama’s art was most expensive in 2014 and 2016. Nonetheless, 2017 is considered as one of Kusama’s best years, as it included several exhibitions in Hirshhorn Museum and Sculpture Garden, the National Gallery Singapore, and two shows at David Zwirener in New York. She further added to her astounding achievements by inaugurating her 5-story museum in Tokyo near her studio and the psychiatric hospital where she lived.

Despite all this, she never felt recognized in the way that the other white male artists of her time were. Many people would not name Yayoi Kusama under the same spotlight of other major contemporary artists such as Donald Judd, Claes Oldenburg, and Andy Warhol. Nevertheless, Kusama is considered one of the greatest Japanese artists to this date, as her unique style is unforgettable.

Why Did I Choose to Research Yayoi Kusama?

One day in my middle school art class, I came across a video on Yayoi Kusama. Not only was I intrigued by her fascinating style of art, but she was also the only female artist we had discussed that year. Every time I saw a piece of her art, I wanted to know more about her. Therefore, I thought this would be a great opportunity for me to learn more about her life, accomplishments, and creative process.