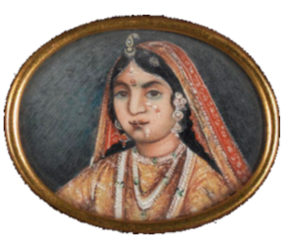 Queen Lakshmibai, or Rani Lakshmibai (also spelled Laxmibai), was born in Maharashtra, a region in Southern India, in 1835. She was originally named Manikarnika or Manubai Tambe (called “Manu” for short), but changed it to Lakshmibai after she was married. Her new name means "goddess of wealth and good fortune". When she was very young, her mother, Bhagirathibai, died, and her father, Moropant Tambe, raised Lakshmibai. Lakshmibai’s father gave her a very unique upbringing, allowing Lakshmibai to learn archery, horse riding, sword fighting, math, history, how to read and write, and several languages, including Farsi. Her rare education instilled a sense of bravery and independence in her that would serve her well in the future.

By the time she was 14 years old, she married Gangadhar Rao, the King (or Raja) of Jhansi. She then moved to Jhansi, a large and thriving kingdom situated in modern-day Uttar Pradesh in North India, where she changed her name to Lakshmibai. When she was 16 years old, she gave birth to a son and heir to the throne in 1851, only for the baby to die soon after. In the coming years, the king also fell ill and, in hopes of continuing the family line, they adopted the King’s fifth cousin, Domodar Rao, as their son and heir in 1853. The king died a day after. 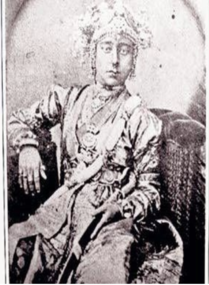 Now a widow at only 18, Lakshmibai petitioned both the Viceroy Lord Dalhousie and the British Parliament to accept Domodar Rao as a legitimate heir in an effort to bypass the Doctrine of Lapse. The Doctrine of Lapse was a rule enforced by the British that allowed them to annex any lands that did not have a legitimate male ruler in charge. The British Parliament refused to acknowledge Domodar Rao as the ruler even after numerous fruitless petitions and went ahead to move their forces into Jhansi. They even offered Rani Lakshmibai a palace and monthly allowance to appease her and her power in the area. It is believed that the British offered her these luxuries in order for Lakshmibai to convince her people to stand down against the British.

Angered greatly by the actions of the British, Lakshmibai refused to accept their decision or bribe and thus a revolt started in Jhansi in 1857. Lakshmibai, with help from her childhood friend and revolutionary Tatya Tope, took her place as ruler of Jhansi despite the British troops in her land. 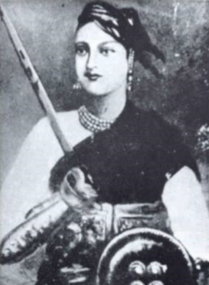 At the time of her rule, a primary source from a visitor in her court described her daily routine, saying, “Her two qualities worth mentioning are her bravery and her generosity. Mostly she was dressed in male attire…. Everyday… she used to sit in the office[,] [where] [t]he magisterial, civil, and procedural matters were handled by her. [She] was very fond of physical exercises. At the break of dawn, she would get up and exercise… for 45 minutes. Then, she used to ride and train on horseback. After that, she would take a round or two on her elephant.” Strong, brave, active, intelligent, and young, Lakshmibai was a capable leader for her people.

In 1858, the British laid siege to the city of Jhansi. There were terrible casualties on both sides, and Lakshmibai and the army she led were forced to retreat from the Palace to the fort of Jhansi. Locked in place by April, Lakshmibai and others attempted to break through the siege. An eyewitness describes, “Baisaheb [Lakshmibai] herself rode a white horse. She wore male attire, riding shoes, and armour covering her whole body. She did not carry even a paisa coin on herself.

With a resounding… war cry, she descended from the fort and, crossing the city, went out through the north gate. The Company cavalry chased them for about [3 miles]. Thereafter, [Lakshmibai]’s horses were no longer in sight.” Although most of her followers and companions died in the effort, Lakshmibai and others made it to a nearby kingdom, Gwalior, where they reunited with other rebel leaders including Tatya Tope and Rao Sahib and attempted to convince local leaders to protect the Fort of Gwalior and stand against the British. In this time, Lakshmibai’s father was captured and killed. 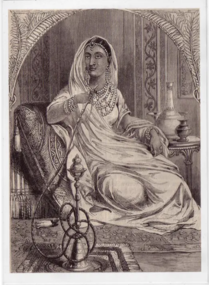 The efforts to convince the local rebel groups to help were unsuccessful; and Lakshmibai and her forces once again came against the British in battle. Lakshmibai tied her adopted son to her back and fought bravely for her people. Even when fatally wounded by a bullet, she kept fighting until she received a sword wound in her thigh. On June 18th, 1858, at not even 23 years old, Lakshmibai’s body was cremated in a secure location, according to her wishes when she stated, “Let no Britisher touch my body.”

After her death, her son was cared for by her companions for 2 years, and then given to the British who let him live peacefully with a pension for the rest of his life. Although in the end, the British prevailed, Lakshmibai remained an example of bravery and resilience that preceded the Independence movement and left a lasting mark on Indian history.

Although in a few accounts (mostly British), she is seen as a murderer and inciter of the violence that led to the deaths of many innocent British people, it is unlikely that she encouraged the killing of British innocents and is remembered as a caring, courageous, and intelligent leader by the Indian people even today.

Her example of bravery and courage both on the battlefield and on the throne has made her a legendary heroine who has left a lasting impression on India and the Independence Movement that came nearly a century later.

Why Did I Choose to Research Lakshmibai?

As mentioned in my bio on the “Our Team” page, ever since hearing about the story behind the statue of the queen on horseback, I have always been interested in the role of women in the Indian Independence movement. My grandpa also used to tell stories from being a teenager during the Independence movement, which also increased my interest in the time period. Among everything I have heard, I still have very little knowledge regarding women during this time who contributed to taking a stand against the British. In an effort to learn more about powerful and impactful Indian women under British rule, I found Lakshmibai. I decided to research Lakshmibai because of her huge impact on the Independence movement and her lasting legacy in India for decades after her death.