Most notable for her leadership in the Tiananmen Square protests and her organizations that aid women and students, Chai Ling’s work has helped and inspired people all around the world.

Chai Ling was born on April 15th, 1966, in the Shandong Province of mainland China, to a loving family. At a young age, she developed a passion for learning and promoting justice after witnessing a teacher belittle a student in her math class. She vowed to “become someone extraordinary” and challenged herself in her studies. Inspired by her ninth-grade physics teacher, Mrs. Qian, Chai Ling set her sights on pursuing physics and physical sciences. However, when she arrived at Peking University, she became interested in the psychology lectures offered to undergraduate students. She became particularly fascinated with the psychologist Abraham Maslow’s theory of self-actualization, or the realization of one’s full talents. In her third year, she convinced the administration to allow her to switch her major to psychology.

During her final year as an undergraduate student at Peking University, she met Feng Congde, her future husband, who had just been released from an arrest for participation in a public demonstration of democracy. With his charismatic disposition and freedom-oriented beliefs, he inspired her to later participate in the protests at Tiananmen Square in 1989. In the spring of 1988, shortly after Chai Ling graduated with a B.A. in psychology, they got married. 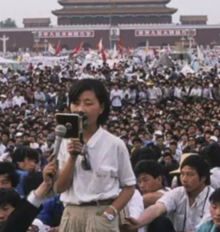 Chai Ling continued her studies in psychology through graduate school at the Child Psychology Institute of Beijing Normal University. During her time there, she witnessed unjust police brutality and a lack of response from government officials. She became involved in the Preparatory Committee at Beijing University, which aimed to protest against and uncover the failures of the government. Initially, the protests seemed to be failing. The government ignored the protests and the students’ morale dropped. In order to rectify this, the students proposed a hunger strike, in which participants fast as a method of political protest. Chai Ling delivered a speech in front of her classmates discussing the necessity for the hunger strike. Her speech garnered a considerable amount of support for the protest.

Chai Ling and the hunger strikers joined the student-led protests at Tiananmen Square, which were prompted by the desire for democracy, freedom of press, and freedom of speech. As the number of hunger strikers proliferated, the government started to feel pressured by the protests. Around the same time, a welcome ceremony for Prime Minister Mikhail Gorbachev of the Soviet Union was planned to be held in Tiananmen Square on May 15th and was grudgingly relocated to the airport. The government, angered by this, declared martial law and sent 250,000 troops to Beijing in hopes of discouraging the protests. 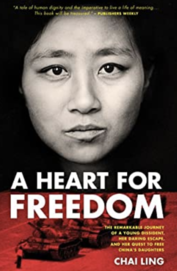 When the protests only continued in their intensity despite the government’s best efforts, police and military troops were sent straight into Tiananmen Square on June 4th, where they arrested and killed thousands of protestors. Chai Ling managed to escape Beijing with her husband and spent the next ten months in hiding. During her time in hiding, she was nominated for the 1990 Nobel Peace Prize.

After ten months, she managed to escape to the United States. Soon after, Chai Ling and Feng Congde divorced, realizing their relationship was falling apart. Chai then got her M.L.A. in Public Affairs at Princeton University in 1993. Five years later, in 1998, she got her M.B.A. from Harvard Business School. Around that time, she founded Jenzabar, Inc,–an organization that revolutionized higher education by creating a student-focused, cloud-based learning and management system.

Despite being in America, she continued to advocate for the protection of human rights internationally. In 2010, she founded All Girls Allowed, an organization to uplift women and girls by sponsoring schools and providing educational spaces around the world. It also aimed to uncover the injustice in China’s one-child policy.

The following year, she published an autobiography titled A Heart for Freedom: The Remarkable Journey of a Young Dissident, Her Daring Escape, and Her Ongoing Quest to Bring Justice to China. In her autobiography, she details the struggles she overcame throughout her life.

Chai Ling is an inspiration for many women around the globe. Her perseverance, hard work, and accomplishments empower women and minorities everywhere.

Why Did I Choose to Research Chai Ling?

I chose to research Chai Ling because I read about her while researching the Tiananmen Square protests. I found her work to be incredibly inspiring and found myself even more interested when I looked more into her accomplishments, specifically the creation of All Girls Allowed and Jenzabar Inc.

‌Chai, L. (2011). A heart for freedom: The remarkable journey of a young dissident, her daring escape, and her quest to free China's daughters. Carol Stream, IL: Tyndale House.