Celebrated as the world’s first computer programmer, Ada Lovelace’s creation of an algorithm to compute Bernoulli numbers provided the foundation for the first modern computers. Ada envisioned a world in which machines could not only execute complex mathematical operations, but had the potential to compose music, create paintings, and manipulate sound. 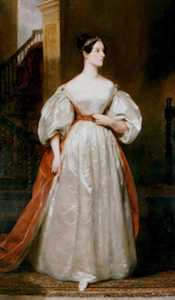 Ada Countess of Lovelace was born on December 10, 1815, in London, England. She was the only legitimate child of Lord Byron, an acclaimed English Romantic poet, and Anabella Milbank, who was descended from an affluent and multi-titled family. Unlike other aristocratic young girls of the 1800s whose educations were centered around sewing, needlework, and music, Ada was immersed in the rigorous study of mathematics and science from an early age. Anabella hoped that this extensive study of challenging subjects would hinder Ada from developing her father’s artistic passions and erratic poetic demeanor.

Ada’s passions for both technology and art were stimulated when she visited the industrialized British midlands to view the evolving contemporary factories and machinery. She was particularly captivated by the automated weaving loom that utilized punch cards to direct the construction of intricate fabric designs. Her intense curiosity regarding applied science was further developed when she encountered Mary Somerville, a Scottish scientist that studied mathematics and astronomy. As a fellow woman interested in the vital implications of science and mathematics, she became Ada’s beloved mentor and inspiration, encouraging Ada to pursue her mathematical studies. In July 1835, at the age of nineteen, Ada married the distinguished William King, who was also a science student and became the Earl of Lovelace. However, William focused on the practical applications of technology, while Ada was fascinated by the beauty and poetic nature of mathematics. She described math as “the language through which alone we can adequately express the great facts of the natural world” and “the instrument through which the weak mind of man can most effectively read his Creator’s work.”

In 1834, English mathematician Charles Babbage proposed the idea of a versatile and reprogrammable machine capable of performing a variety of mathematical operations called the “Analytical Engine.” The beauty of Babbage’s design went unrecognized by the British government, the media, and all scientific journals who were unwilling to fund Babbage’s invention. However, Ada Lovelace was deeply inspired by the idea of such a complex machine. She expanded on Babbage’s initial idea, believing that the machine could have the ability to not only decipher numbers but also symbolic notation. Ada became Babbage’s publicist and partner. Captain Luigi Menabrea, an Italian military engineer, wrote an article describing Babbage’s invention. Ada translated the article from Italian to English and submitted the paper to Scientific Memoirs—an English research journal whose purpose was to communicate the details of extraordinary technological accomplishments with the scientific community. In addition to Ada’s translation of the article, she also wrote a series of technical notes describing her envisioned functionality of the Analytical Engine. Ada’s detailed and elaborate notes proved to be extremely influential to the first electronic computer creators and had a greater impact on the history of computer science than the article itself. She determined that the Analytical Engine could not only be a simple calculator, but also a reprogrammable general-purpose machine, which would be the basis of the first modern computer. She described the envisioned machine poetically, indicating, “The Analytical Engine weaves patterns just as the Jacquard loom weaves flowers and leaves.” Ada’s notes detailed intricate mechanical operations that were similar to the first electronic computers, especially the work of Alan Turing who expanded on Ada’s vision of a multi-purpose machine during the 1940s. 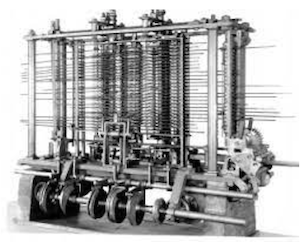 Through her notes, Ada determined that various forms of data and information such as music, images, and numbers, could be compacted in a digital format and expressed by a machine. She also developed the first computer program by creating a diagram and an algorithm of how Bernoulli numbers could be calculated. Bernoulli numbers are a series of rational numbers that are essential in number theory and appear frequently in trigonometric functions. Thus, Ada has been credited with the creation of the first computer program and honored as the “world’s first computer programmer.” Like many other scientists and mathematicians of the era, Ada struggled with the difficult technological dilemma of whether machines were truly capable of thinking on their own. Ada Lovelace believed that machines were unable to think on their own; she indicated that the Analytical Machine, proposed by Babbage, was only capable of performing the operations if instructed by an engineer.

During the final year of Ada’s life, she encountered a painful battle with uterine cancer and died on November 27, 1852, at the age of 36. Despite the restrictions of her gender, Ada was a true trailblazer in the field of computer science with her creation of the first algorithm. In a letter to Lady Noel Byron, Ada’s tutor Augustus De Morgan indicated that “the very great tension of mind which they require is beyond the strength of a woman’s physical power of application.” Essentially, he believed that women, such as Ada Lovelace, did not have the intellectual capability to impact the scientific community. Ada’s fundamental contribution to the field of computer science was not fully recognized until 1953 after her notes were republished by B.V Bowden in his book Faster Than Thought: A Symposium on Digital Computing Machines. The U.S. Defense Department has honored her memory by referring to its sophisticated programming language as “Ada.” The second Tuesday of October has become Ada Lovelace Day, an international celebration of the previously unrecognized achievements of women in STEM fields. She greatly inspired and influenced the modern digital age through her passions for poetical science and technology, believing that the two could be interwoven to create a machine that is fully capable of representing the boundless possibilities of the human imagination.

Why Did I Choose to Research Ada Lovelace?

I chose to research Ada Lovelace because I am passionate about the field of computer science and the importance of representing the women who laid the foundation for such an important field. Ada Lovelace valued both the artistic and scientific components of computer science and integrated these interests into her design of the first computer program. Ada inspires me to develop both my artistic and technological passions, in order to implement positive change in the world. I hope that learning about the achievements of Ada Lovelace will inspire other young girls to pursue STEM fields and provide them with the courage to achieve their greatest dreams.