Maryam Mirzakhani was born on May 12th, 1977 in Tehran, Iran to Zahra Haghighi and Ahmad Mirzakhani. As a child, her interests laid in literature: she used to tell herself stories about a remarkable heroine who, every night, would become mayor, travel overseas, and save the world. She reflected, “As a kid, I dreamt of becoming a writer. My most exciting pastime was reading novels… I never thought I would pursue mathematics.” 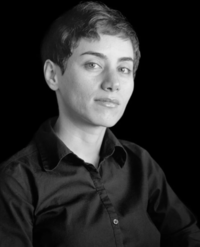 Her parents created a supportive learning environment and encouraged her to find a passion and steady profession, without focusing on the success or achievement. A stable career would’ve been especially of importance to her because of the ongoing Iran-Iraq war during her childhood. Thankfully, the war ended just as she finished elementary school, which allowed her to go to the esteemed Tehran Farzanegan School for girls in middle school and high school. The first week after entering middle school, she made a friend, Roya Beheshti, who shared her interest in books; they helped each other stay motivated in their studies. Both shared similar academic interests and later on, career trajectories, as Beheshti is currently a professor in Mathematics at the Washington University in Saint Louis.

Mirzakhani attributed her first interest in the sciences to her older brother, and fondly remembered learning the story of Gauss, who found a simple method to find the sum of numbers from 1 to 100. She also recalled having a strong-willed female school principal, who worked hard to provide her students with the same educational opportunities as the boys. In high school, Mirzakhani did poorly in her first mathematics class, which undermined her confidence. The following year, however, her performance improved incredibly under an encouraging teacher, and Mirzakhani became involved with Math Olympiads. Not only did she enjoy the challenge, but she was also incredibly talented. In 1994, when Mirzakhani was 17, she qualified for the Iranian math Olympiad team. She won two gold medals in the International Mathematics Olympiad for high school students in 1994 and 1995, attaining a perfect score in 1995.

In 1999, she received her Bachelor’s degree in mathematics from the Sharif University of Technology in Tehran. During her time there, she was recognized by the American Mathematical Society for her work in developing a simple proof for a Schur theorem, which is applied in differential geometry and functional analysis. Furthermore, that same year, she published the book Elementary Number Theory: Challenging Problems, written in conjunction with Roya Beheshti. Mirzakhani reflects, “I met many inspiring mathematicians and friends at Sharif University. The more time I spent on mathematics, the more excited I became.”

Next, she moved to the United States to complete her graduate studies at Harvard University. There, Mirzakhani worked with Fields Medalist Curtis McMullen on hyperbolic spaces. McMullen recounts his time with her very positively and describes her as having “a fearless ambition when it comes to mathematics.” Similarly, Mirzakhani has glowing remarks for McMullen. Even though she had trouble understanding English, she attended his informal seminars and was fascinated by his elegant hyperbolic solutions. She recounted visiting him multiple times during office hours to ask questions about the curriculum and spark illuminating discussions. Her conversations with McMullen piqued her interest in hyperbolic structures on a given topological surface, which influenced her to make it the topic of her dissertation. Furthermore, she enjoys approaching the same problem from different angles, including theoretical physics and combinatorics.

In 2004, she earned her PhD for her dissertation, Simple Geodesics on Hyperbolic Surfaces and Volume of the Moduli Space of Curves. Her research focused on hyperbolic surfaces, where the sum of the angles of a triangle is less than 180 degrees. In this non-Euclidean, curved space, the shortest path between two points is called a geodesic. University of Chicago mathematician Alex Eskin described her work as, ‘the kind of mathematics you immediately recognize belongs in a textbook.” Mirzakhani’s thesis resulted in three papers being published in three top mathematics journals: the Journal of the American Mathematical Society, the Inventiones Mathematicae, and the Annals of Mathematics. 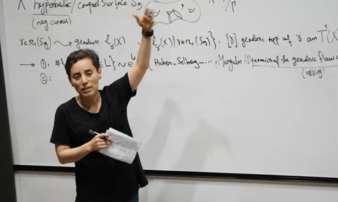 Mirzakhani is self-described as a slow thinker. Even if she is not as fast as other mathematicians who solve problems with quicksilver brilliance, she doesn’t feel intimidated: “I don’t get easily disappointed. I’m quite confident, in some sense.” Her slow and steady approach has allowed her to reap many rewards, as she gravitates towards deep problems to ponder for years. After a couple of months, she is able to spot ingenious and mind blowing connections. For example, in 2006, she tackled a problem about a hypothetical hyperbolic surface whose geometry is deformed due to a mechanism akin to a strike-slip earthquake. Here, she proved the conjecture that the flow of an earthquake on Teichmüller space is “ergodic.” Curtis McMullen remarked that before her work, “this problem was completely unapproachable [but] she constructed a bridge between this completely opaque theory and another theory that’s completely transparent.”

In the same year, Mirzakhani and Alex Eskin, a mathematician at the University of Chicago, tackled a large, unsolved problem at the time. The problem was that if one is given a ball that bounces around a billiard table in the shape of any polygon, what is its range of behaviors? The concept of rational billiards began a century ago but was yet to be solved 100 years later.

However, the two were able to use a concept called “moduli spaces” to better understand the trajectory of the ball. In 2012 and 2013, Mirzakhani and Eskin published a 172-page paper in collaboration with Amir Mohammadi of the University of Texas at Austin. This paper concerned generalizing translation surfaces to all doughnut surfaces with more than two holes, a concept in topology which is the study of the properties of deformed geometric objects. Their investigation and discovery was hailed as “the beginning of a new era” and a “titanic work” in mathematics. Their work can be applied in the real world, for example, to understanding the warped vision of a security guard in mirrored rooms.

On August 13th, 2014, Mirzakhani was awarded the Fields Medal for her research in “the dynamics and geometry of Riemann surfaces and their moduli spaces,” which incorporates high level calculus and topology. The Fields Medal is the most prestigious prize in mathematics and is often described as the mathematician’s Nobel Prize. It is awarded to only 2-4 mathematicians under 40 years of age at the International Congress of Mathematicians, which is a convention that occurs every four years. This makes Mirzakhani the only woman and only Iranian to date who has won the award, showing her remarkable impact in the field of mathematics. 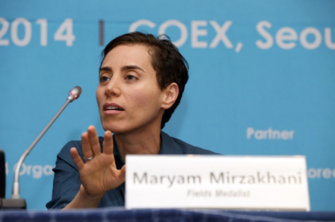 However, previously in 2013, Mirzakhani was diagnosed with breast cancer. She battled it for 4 years, until the disease metastasized to her liver and bones. She passed away on July 14th, 2017, at the age of 40 at Stanford Hospital.

Mirzakhani was “in the midst of doing fantastic work… in solving problems, she developed tools that are now the bread and butter of people working in the field,” says Dr. Peter Sarnak, a fellow mathematician and friend. The Fields Medal is awarded only to those aged 40 or younger because not only is it meant to honor past achievements, but also to predict future accomplishments. Despite the mathematics community losing one of its most talented and persevering minds far too early, her work continues to be honored by those who develop mathematics thanks to her discoveries.

Even after her passing, her legacy continues to inspire people everywhere. Prior, in 2014, the Mirzakhani Society was founded at the University of Oxford for women and non-binary students studying mathematics in her honor. In 2017, Farzanegan high school named their amphitheater and library after her. Sharif University of Technology named their main library in the College of Mathematics after her and the House of Mathematics in Isfahan, a city in Iran, named a conference hall after her. In February of 2018, a micro-satellite was also named in honor of her. Lastly, in February 2020, Mirzakhani was honored by United Nations Women as one of seven female scientists who have shaped the world.

As President Hassan Rouhani of Iran wrote, “The unparalleled excellence of the creative scientist and humble person that echoed Iran’s name in scientific circles around the world was a turning point in introducing Iranian women and youth on their way to conquer the summits of pride and various international stages.”

Why Did I Choose to Research Maryam Mirzakhani?

I first heard about Maryam Mirzakhani at a math camp that I attended in middle school. I didn’t understand the significance of having a female Fields Medalist at the time, but in retrospect, I think she is such a role model in intellect and character. I was interested in understanding her drive for excellence and life history, so I chose to research and write about her for iFeminist.