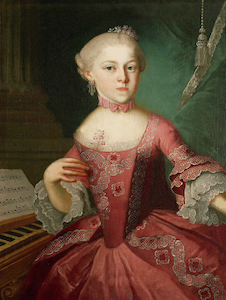 Gender norms in classical Europe destined the prodigious Maria Anna Mozart’s musical legacy to be forgotten. Maria Anna was born on July 30th, 1751, in Salzburg, Austria, five years before her famous brother, Wolfgang Amedeus Mozart. Born into an accomplished family of musicians, Maria Anna’s childhood was filled with musical influence. Her father, Leopold Mozart, was a professional musician and taught Anna Maria how to play the harpsichord from age seven. The younger Wolfgang idolized Maria Anna and closely followed her musical studies. The two siblings were very close; their strong relationship persevered throughout their lives. In Maria Anna’s early childhood, Leopold had been promoted to deputy conductor ​​in the orchestra of the Prince-Archbishop of Salzburg. However, he gave up the opportunity to devote himself to his children’s successes. Knowing that the Mozart children had immense talent, he took Maria Anna and her brother on tour throughout Europe. The tour spanned across notable cities such as Munich, Vienna, Paris, and London, where they played for distinguished crowds. Their performances were very well received by audiences, who were stunned by the precision and accuracy of Maria Anna’s musicianship. The duo’s talents had even reached nobility, and their music was sought out by King Louis XV and King George III. Leopold wrote, “Everyone was amazed. It’s another gift from God — the type many people are bestowed with only after hard work." Maria Anna and her brother Wolfgang gained popularity with their musical audiences, contributing to the rise and desire of child prodigies.

However, at the age of 18, Maria Anna reached a marriageable age and ended her tour, while Wolfgang continued alone. Reportedly, Wolfgang announced that one of his pieces was written by his sister, causing Leopold to end Maria Anna’s musical career in order to save her reputation. Despite her overwhelming talent and musical experience, gender norms forced Maria Anna to marry. It was acceptable for young women to pursue music, but adult women in that field would have a tarnished reputation. Earning money as a professional musician would limit her chances of marriage, which was one of the only ways for women to have a “successful life” at the time. 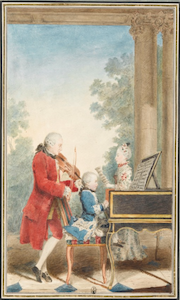 Maria Anna returned home and lived with her mother, continuing to compose and play various instruments. Wolfgang reportedly wrote letters to her, stating how much he missed her and wished she was on tour. She took on numerous students to make up for the outward loss of her musicianship, continuing her father’s teaching legacy. Eventually, at 33, Maria Anna married Johann Baptist Franz von Berchtold zu Sonnenburg and had three children. Maria Anna continued her musicianship throughout her life, a rare pursuit with the household responsibility set upon women. The extent of Maria Anna’s musicianship is unknown, since there is a lack of evidence of her compositional works and performances. However, letters written by Mozart describe beautiful compositions by Maria Anna and encourage her to write more.

Furthermore, many of Wolfgang’s works have been speculated to include some influence from Maria Anna. Martin Jarvis, a retired professor at Charles Darwin University, has forensically studied Mozart’s compositions since 2007, and notes that in the original drafting of Mozart’s five violin concertos, there were various handwritings in the margins. Jarvis hypothesizes that Maria Anna composed the pieces, and Wolfgang assumed the credit. However, this theory cannot be proven factual. 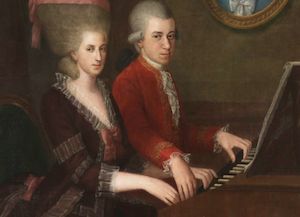 With the death of her father in 1787 and her husband in 1801, Maria Anna was free from male superiority. Maria Anna spent the rest of her life teaching and continuing to make music, eventually passing away in 1829. Despite various appraisals of her talent, the uncertainty of Maria Anna’s legacy highlights the impact of gender norms throughout history. Maria Anna’s musical legacy could have been largely recognized if she had been able to pursue her talents freely. Her memory and evident talent deserves to be commemorated, alongside the praise of Wolfgang, because she influenced his musical growth.

Moreover, When Wolfgang passed away, Maria Anna and Wolfgang’s wife, Constanze, developed a biography of his life. They supplied musical material to preserve his memory. Without Maria Anna, Wolfgang might not have had as much of an impact on the musical world as he ultimately did.

Why Did I Choose to Research Maria Anna Mozart?

As a musician, I am familiar with how female musicians and artists often come second to male counterparts and how we must work much harder to be recognized for our talents. Maria Anna is a prime example of this, representing the vast amount of art we have undoubtedly lost. Maria Anna was able to stay true to her passion for music throughout her life, despite living in an age where she was forced to diminish herself and her talent to fit stereotypes. I chose to research Maria Anna Mozart to help expand her legacy.

White, F. (2019, May 30). The quiet genius of Maria Anna Mozart. All About History. Retrieved May 22, 2022, from https://www.historyanswers.co.uk/people-politics/the-quiet-genius-of-maria-anna-mozart/.