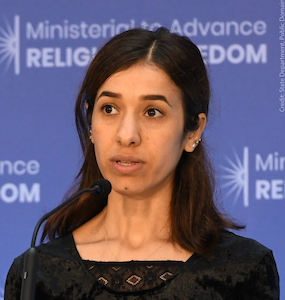 Nadia Murad was born in 1993 in Kojo, Iraq, and belongs to the Yazidi ethnic and religious minority. She grew up peacefully, surrounded by her parents and siblings. As a young girl, she wanted to graduate from high school and open a beauty parlor. These dreams were brutally crushed in 2014 when the Islamic State (ISIS) attacked her village. During the invasion, ISIS killed six hundred Yazidi men, while Nadia and other women were taken as prisoners and subjected to beatings and rapings. As a result, she lost her mother, her six brothers, and her brothers’ children. In one of her speeches, Nadia expressed that all Yazidi families had a similar story, because of this genocide, “one more horrible than the other.”

The Yazidi are an ethnic-religious group living in the northern Iraqi province of Nineveh. They also live, in smaller populations, in Syria, Armenia, Georgia, Russia, Ukraine and Germany. Because of their religious beliefs and practices, the Yazidi community have suffered marginalization, discrimination, and genocide throughout history. In 2014, Nadia Murad was captured with thousands of other Yazidi women to be tortured and sold into sex slavery. After three months, she managed to escape through an unlocked door with the help of a Muslim family. She lived in a refugee camp and later moved to Germany as a refugee. She shared, “I still think that being forced to leave your home out of fear is one of the worst injustices a human being can face. Everything you love is stolen, and you risk your life to live in a place that means nothing to you.” 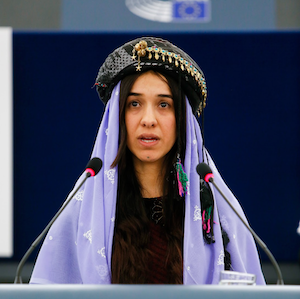 Once Murad sought refuge in Germany in 2015, she began to share her story, hoping that the thousands of Yazidis, who were still in captivity, could be saved. She became a fierce advocate for her community and all survivors of sexual violence. She gave several speeches and met with world leaders, in order to raise awareness about the genocide and the use of rape as a weapon of war. She shows an immense amount of courage by repeatedly talking about her journey because, as she said, “It never gets easier to tell your story. Each time you speak it, you relive it.”

Her activism began to draw attention in 2016, when she became the first United Nations Goodwill Ambassador for the Dignity of Survivors of Human Trafficking. She also received different awards, such as the Sakharov Prize for Freedom of Thought and the Council of Europe Václav Havel Award for Human Rights. Furthermore, in 2018, she was the first Iraqi to win a Nobel Prize. She received the Nobel Peace Prize jointly with Dr. Denis Mukwege, a Congolese gynecologist, for their efforts to end the use of sexual violence as a weapon of war and armed conflict;they co-founded the Global Fund for Survivors of Conflict-Related Sexual Violence. 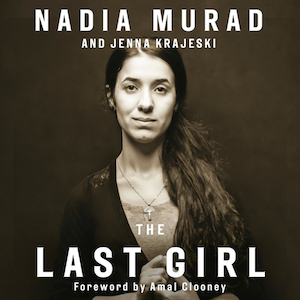 On top of these incredible achievements, Nadia Murad published a New York Times bestselling memoir in 2017, titled The Last Girl: My Story of Captivity, and My Fight Against the Islamic State. In this book, she gives a detailed narrative of her story and the genocide against her community. In 2018, she founded Nadia's Initiative. Her organization works to make the world a better place for women, minorities, and children. It also supports and redevelops communities that have experienced trauma. This is done through advocacy as well as the provision of services focused on women’s empowerment, education, health, livelihoods, clean water, and culture for Yazidis in Sinjar, Iraq. Nadia’s Initiative fights to end gender-based-violence during conflict, and strives to give a vocal platform for female survivors. In 2019, Nadia Murad also became a United Nations Sustainable Development Goals Advocate.

Despite the tremendous efforts Nadia Murad has already undertaken, she is not ready to stop. Thousands of Yazidi people have still not been found since their disappearance and many are internally displaced, or waiting in refugee camps. Therefore, she continues to raise awareness and fight for justice.

Why Did I Choose to Research Nadia Murad?

One day I found a video of Nadia Murad telling her story to Donald Trump, asking for international support to help her community find a safe place to live. I was moved by her courage and dedication and, therefore, decided to do more research about her and the Yazidi community. Although her efforts have been awarded with the Nobel Peace Prize, she still remains unknown by the wider public. I believe that Nadia Murad is a remarkable woman and her relentless fight against gender-based violence should be highlighted.

Murad, N. (2018, October 6). I was an Isis sex slave. I tell my story because it is the best weapon I have. The Guardian. Retrieved from https://www.theguardian.com/commentisfree/2018/oct/06/nadia-murad-isis-sex-slave-nobel-peace-prize.‌