Bertha “Birdie” Parker Pallan was a pioneer for archaeological discoveries as well as a woman who rose above discrimination during a time when Native American women were still conintuously disadvantaged. 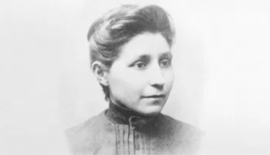 Bertha Parker Pallan was born on August 30th, 1907, in Chautauqua County, upstate NY. Her father and mother were named Arthur Caswell Parker and Beulah Tahamont, respectively. Bertha’s mother Beulah was an actor from the Abenaki tribe whilst her father Arthur was from the Seneca tribe. Bertha’s father initially exposed Bertha to archaeology, as he was the president of the Society for American Archaeology. Since Bertha received experience in archaeology from a young age, she gained a gateway to this field through a direct and deep connection.

After her parents divorced in 1914, Bertha and her mother moved to Los Angeles, California, where she performed in a show called Pochahontas with her mother in the Ringling Brothers’ Circus. In 1924, Bertha married José Pallan, her first husband, and in 1925, she had her first daughter, Wilma Mae, who was also nicknamed “Billie.” However, Bertha and Pallan’s marriage ended rapidly due to Pallan’s abuse, which involved kidnapping Bertha, her mother, and Billie and bringing them to Mexico. After her father and uncle brought them back from the terrifying incident, the three of them were brought to live with Bertha’s uncle, Mark Raymond Harrington. Despite these familial struggles, Bertha started her archaeology career during the late 1920s in Nevada, Arizona. Bertha’s uncle allowed her to work as a cook and expedition secretary while she lived with him. Immersing herself in her archaeological studies, Bertha learned independently without a formal education. 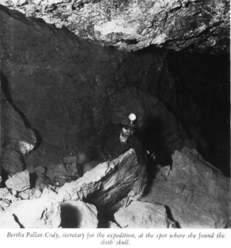 In 1929, she discovered an archeological site in Pueblo with her daughter, Billie. Bertha named this site Scorpion Hill, where she investigated and published the results of her discoveries on her own. Her findings were later displayed in the Southwest Museum, Los Angeles. However, these findings were just the start. Within the next year, Bertha’s excavations became increasingly successful. She found another site called Corn Creek, Nevada, where she discovered fossilized camel bones in an eroded lake. This newly discovered site was a part of another site called Gypsum Cave, which was found in 1930 by her group. Gypsum Cave became known as one of the most important expeditions in Nevada after Bertha discovered a skull of a rare and extinct species of giant sloths called the Nothrotherium Shastense. Additionally, she found ancient human tools near the skull fossil. Through Bertha’s discoveries, evidence was found of early human occupation in North America with relation to extinct species during the Pleistocene geological era of human migration. These findings gained the attention of institutions like the California Institute of Technology and the Carnegie Institution of Washington. 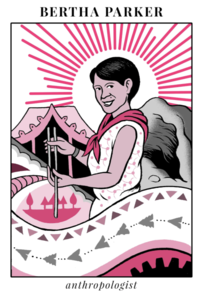 Along with archeological findings, Bertha also met her second husband during her Gypsum Cave expedition. His name was James E. Thurston and he was also an archaeologist. However, Thurston died of a tragic heart attack a year after their marriage. As a result of his death and falling ill herself, Bertha moved back to Los Angeles. In Los Angeles, Bertha met a man known as Espera “Oscar” DeCorti, or “Iron Eyes Cody”, and married him in 1936.

In the following years, Bertha started working in the ethnography field at the Southwest Museum, focusing on the study of human societies. She mainly published papers about Indigenous Californian tribes and archaeology concepts for the Southwest Museum’s journal, Masterkey. However, Bertha later quit this job after her daughter Billie died in an accident in 1942. After quitting her job, Bertha continued her career in consultation as she persevered through her life despite her past struggles. Bertha and her husband hosted a television show in the 1950s centered around educating people on Native American history and culture. Furthermore, Bertha began a consulting company with her husband called “Ironeyes Enterprise” in which she helped increase representation for Indigenous culture and individuals in Hollywood movies.

On October 8th, 1978, Bertha Pallan Parker died at the age of 71. Her grave is marked, “Mrs. Iron Eyes Cody'', which only acknowledges her life in relation to her husband, downplaying all the contributions she has made in her lifetime. As a strong and dedicated woman, Bertha Parker Pallan deserves more recognition for her accomplishments. From making an extremely important archaeological discovery to overcoming difficult challenges throughout her life, Bertha Parker Pallan’s impact on representation within archaeology is one that deserves to be brought to light.

Why Did I Choose to Research Bertha Parker Pallan?

I chose to write about Bertha Parker Pallan after coming across a post about her on Instagram. When I looked up her name, the extent of her presence consisted of little images and short articles. I found it extremely alarming that she was not getting the recognition she deserved as I knew that Indigenous individuals in America are extremely underrepresented.

‌Marranzino, A. (2019, June 06). Bertha Parker, the trailblazing first Indigenous North American archaeologist, taught herself how to excavate a site. Retrieved June 10, 2020, from https://massivesci.com/articles/bertha-parker-pallan-archaeology-native-american-abenaki-seneca/