Yeonmi Park is a North Korean defector who escaped North Korea when she was just thirteen years old. She is well-known for her activism in speaking out against the North Korean government and defending North Korean citizens’ rights. Through her interviews, writings and speeches, Yeonmi has and continues to share her extraordinary story. 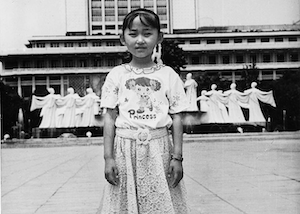 Yeonmi Park was born on October 4th, 1993, in Hyesan, North Korea, a town near the border between China and North Korea. Her family consisted of her mother, Byeon Keum Sook, her father, Jin-Sik Park, and her sister, Eunmi, who was two years older. Yeonmi and her family lived in a one story house, where they made it through the cold, winter months with a small fireplace and blankets. Since the water pipes in their home would almost always be dry, Yeonmi’s mother would wash their clothes in the river. Her life was full of hardship; sometimes she would live in extreme cold and hunger, rarely having access to electricity.

In 1991, when the Soviet Union failed, North Korea could no longer import cheap goods and thus its economy collapsed, forcing her father to secretly smuggle Chinese goods to support her family.

In 2003, when Yeonmi was ten years old, her father was caught smuggling goods and sentenced to hard labor. Yeonmi and her family struggled to survive without her father’s earnings, but eventually, he was released on medical leave. The family decided that they needed to leave North Korea, but were separated before they could do so. On March 31st, 2007, Yeonmi and her mother went across the frozen Yalu River, guided by a smuggler into China, where they hid from Chinese officials who could have forced them to return to North Korea. Yeonmi’s older sister, Eunmi, at age 16, had already left for China a few months prior.

In China, human traffickers captured Yeonmi and her mother. To protect her daughter from the dangers of these traffickers, Yeonmi’s mother sacrificed herself, and endured rape and abuse. The traffickers then sold her mother to a Chinese farmer as a bride, while Yeonmi’s smuggler offered her a chance to find her family, only if she became his mistress. She became his assistant in ushering other North Korean women to China, but also faced sexual assault repeatedly. Her smuggler eventually stayed true to his word and reunited her with her parents. Unfortunately, only a few weeks after they were reunited, her father died of colon cancer. 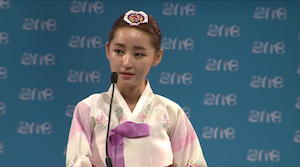 Through word of mouth, Yeonmi and her mother discovered that South Korea was granting refugee status to North Koreans, and decided to leave China. Led by Christian missionaries, in March of 2009, Yeonmi and her mother escaped to Mongolia, where they then flew to South Korea. Following their arrival, Yeonmi, her mother, and other North Korean refugees integrated into South Korean society. When she first arrived, Yeonmi had the equivalent of two years of primary school education, yet just three years later, she began studying criminal justice at Dongguk University, a top university in Seoul. In 2014, Yeonmi and her family moved to New York City, United States to work on her memoir, grow her presence as an activist and later pursue higher education at Columbia University.

Yeonmi decided to share her story and has become a voice for millions of oppressed North Koreans. In 2014, her article about North Korea’s “Black Market Generation,” which talked about how her “black market generation” will change North Korean society, was published in the Washington Post and gained mass popularity. In 2015, she published her memoir: In Order to Live: A North Korean Girl’s Journey to Freedom, which became an international success and was published in 20 languages. In addition, she became recognized internationally at the 2014 Oslo Freedom Forum (an international gathering of human rights and pro-democracy activists) and the One Young World Summit (a summit that recognizes and supports young leaders) in Dublin, after delivering a very intimate speech about the viciousness of the North Korean regime. She has also been named one of BBC’s “Top 100 Global Women.” 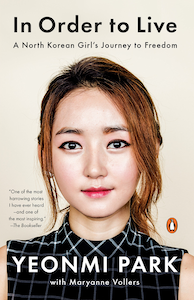 Yeonmi has been featured in many news outlets, such as the BBC and The New York Times, where she has shared her story and spoken about North Korea’s corrupt government. She continues to advocate for North Korean rights and the removal of Kim Jong-un’s regime. One way she works towards this removal is as one of the directors of the Human Rights Foundation, which serves to shatter dictatorships worldwide. They have many initiatives all over the world, such as “Flash Drives for Freedom,” where they smuggle flash drives into North Korea and have reached 1.1M North Koreans. She also works with charities and campaigns that focus on aiding North Koreans.

Seven years after being separated, Yeonmi found her older sister, Eunmi, and her family was finally able to reunite. Yeonmi had a son with a man named Ezekiel, whom she married in 2017 and divorced in 2020. She also received a bachelor’s degree in economics at Columbia University, which she attended from 2016 to 2018.

Although Yeonmi Park faced many hardships in her lifetime, she continues to stand up for human rights and criticize an unjust government. She is confident that she will be able to return to North Korea in the future, to further her activism. Through her work and experiences, Yeonmi spreads awareness about North Korea’s dictatorship and the lives of the nation’s citizens, remaining an inspiration to people across the world.

Why Did I Choose to Research Yeonmi Park?

I chose to research Yeonmi Park because I read her memoir, In Order to Live: A North Korean Girl’s Journey to Freedom, which really opened my eyes to the struggles of North Koreans. I was inspired by her courage to escape the only country she ever knew and win her parents’ freedom in China. I also think that she’s extremely brave to share her story, even though she has to recount the hardships and trauma she faced. I want others to learn about her and be inspired by her, just as I was.

Preston, A. (2015, October 4). Yeonmi Park: “I hope my book will shine a light on the darkest place in the world.” The Guardian. https://www.theguardian.com/books/2015/oct/04/park-yeon-mi-in-order-to-live-north-korea-interview.