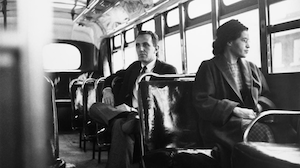 Rosa Louise McCauley Parks was born on February 4th, 1913 in Alabama, to a carpenter and a teacher, and was the first of two children. Her parents separated when she was young, and her mother raised her and her brother on her grandparents’ farm in Alabama. From a young age, she was subjected to numerous forms of racial discrimination, such as the Jim Crow laws and the Ku Klux Klan’s violent acts (and threats) against Black people. Her childhood helped her develop strong roots in the African Methodist Church, as she did not attend school till the age of 11. Even with formal schooling, her education was influenced by Jim Crow laws, which provided school bus services for white children, but not for black children who had to walk to school. She was forced to drop out of school at sixteen to care for her ill grandmother, and worked as a servant in affluent white neighborhoods, in order to earn an income. In 1932, Parks married a barber (Raymond Parks), who was also a member of the National Association for the Advancement of Coloured People (NAACP), an organization that Parks later joined. They did not have any children. She completed her high school diploma in the same year, during which she also worked as a seamstress. 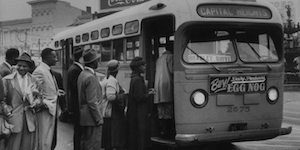 On December 1st, 1955 on a city bus, a driver asked Parks and a few other Black passengers to give up their seats for standing White passengers. When she stood her ground, the police arrested her. This was not the first time James Blake (the city bus driver) and Parks had had an argument. Twelve years prior, she had entered the city bus from the front, defying a rule that only allowed Black people to enter the city bus from the back. When the driver pointed this out, Parks refused to comply and left the bus.

Following her unjust arrest, Parks became a plaintiff in attempting to remove segregation laws with the help of (then) NAACP (the National Association for the Advancement of Coloured People) President Nixon. Civil rights activists boycotted the Montgomery Bus system for three hundred and eighty-one days, before bus segregation was finally ruled unconstitutional on November 13th, 1956. A month later, the city buses were deemed free from segregation.

In 1957, Parks relocated to Detroit and served as an administrative aide to Congressman John Conyers Jr., while still being an active member of the NAACP (the National Association for the Advancement of Coloured People). She used her position to raise funds for the NAACP and fight for greater racial equality, and she held this position until 1988. In 1987, Parks and her husband founded an institution for self development, which aimed to teach adolescents and young adults, in Detroit, about the history behind the civil rights movement. 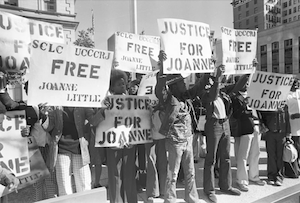 Although Parks is mainly known for her activism in the civil rights movement, she also actively fought against sexual assault in Alabama. At that time, the concept of rape only applied to White female victims. Thus, it was impossible for Black women to get justice against their assaulters. Despite this difficulty, and as a victim of attempted rape, Parks went on to inspire countless women to speak out about their assaults. She assisted on the establishment of “Joanne Little’s Defense Committee,” allowing Joan Little to become the first woman, in American history, to win a homicide case in which a victim of sexual assault used self-defense to kill her rapist in a prison cell. In regards to the case, Clarence Alligood was the 62 year old prison guard, who had a history of raping women prisoners. Her case demonstrated how a capitalist society treats Black women and girls; throughout the trial Joan was criminalized as the aggressor, yet protests showed up outside the trial, with signs protesting “Free Joan Little” and “Self defense is not a crime;” protesters even put together a country-wide “Free Joan Little Day” in 1975. Furthermore, Parks was an advocate for Black women’s suffrage. The Supreme Court had passed the 19th amendment in 1920, which allowed Black women in the South to vote. However, the amendment was limited to those who could afford to pay the voting poll tax. In response to this inequality, Parks fought for the enfranchisement of all Black women living in the South. Her valiant efforts eventually proved fruitful, as President Lyndon Johnson signed the Voting Rights Act in 1965, prohibiting racial discrimination in voting.

After Rosa Parks died of natural causes on October 24th, 2005, her body was laid to rest in the U.S. Capitol, a burial site reserved for citizens who have changed their country for the better. She was the first woman and second Black person to have this honor. Even after her death, Rosa Parks is recognized as the face of the civil rights movement, and has received multiple awards in her name, including the Peace Abbey of Conscience, Presidential Medal of Freedom, and Congressional Gold Medal. Unfortunately, racial injustice is still prevalent; we must not forget the achievements and sacrifices of courageous individuals, like Rosa Parks, and strive to reshape society into a better, more accepting place.


Why Did I Choose to Research Rosa Parks?

I chose to research Rosa Parks, because as a woman of color, I feel that racial injustice is still very present in our time even through all the obstacles our ancestors had to overcome. I was so inspired by Rosa Parks that when I was in Grade 3, I researched and dressed up as Rosa Parks while celebrating influential people on History Day. Racial injustice will never cease to exist, but we should honor what previous women in history have done for us whilst battling not only gender but racial inequality. Even after her death, Rosa Parks is recognized as the face of the Civil Rights Movement.