Born on February 11th, 1934 in England, Mary Quant attended Blackheath High School and studied illustration at Goldsmith’s College of Art in London. There, she met Alexander Plunkett Greene, who became a fashion entrepreneur and also her husband. She then spent two years under an apprenticeship designing hats. Quant’s talents did not halt with hat-making: she opened a boutique named “Bazaar” in 1957 in Chelsea, London in partnership with her husband and entrepreneur Archie McNair. They believed that with loud music, wine, and late hours, they could attract a new young crowd. 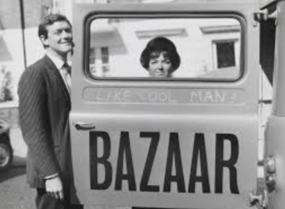 They were right. According to Harper’s Bazaar, “In the heyday of Swinging London, there was no more thrilling or influential place to shop than Bazaar, Mary Quant's King's Road boutique.” Quant was in charge of the clothing stocking, however, she quickly realized that she was unsatisfied with the clothing in the market. Thus starting Quant’s journey of designing clothes for “Bazaar.”

In the 60s, fashion was trickling from “on the streets” to designers’ work tables. Taking inspiration from youth culture, Quant designed new short skirts with pleats, white anklets, and black patent ankle-strap shoes. The public loved their designs. The youthquake was everywhere. Quant’s inspiration from younger generations prompted her to be the creator of miniskirts and hot pants (short shorts), items that are still prevalent today. 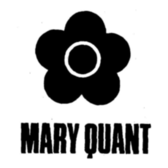 Her distinctive packaging and daisy logo distinguished her brand from other brands at the time.

Her philosophy of freedom and fun for clothes aligned with radical feminist ideas of the 60s and 70s. Women were demanding more from society, in the form of reproductive rights and gender equality. The place of women in society was changing and becoming more present. With this in mind, women were dressing differently. It was a direct relationship from how they felt to how they were dressing. Shortening skirts represented freedom in women’s eyes. Feminism was affecting Quant’s fashion decisions because women's clothings were everchanging: colorful tights and hotpants were in! The oppression of women was out! 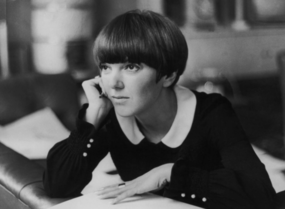 Quant was the first designer to use Poly-Vinyl-Chloride (PVC) in fashion which has been a major fashion material since as well as the first to sell colorful pantyhose. She also diversified lingerie and underwear options. She made the rules and she broke them.

In 1962, she entered a contract with J. C. Penney that involved 1,700 retail outlets in the US, and in 1963, she launched her own line, The Ginger Group. During the 70s, she designed away and produced jumpsuits, dresses, etc, and even did a children’s line in 1978. Quant never stopped designing Mod-style clothing (Mod refers to the style of bold, youthful clothing that was popular in the 1960s) that fit the London youth aesthetic. 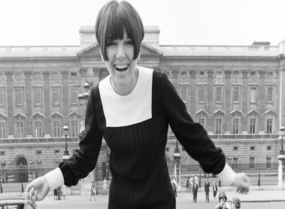 In terms of her later accomplishments, Quant held an exhibition from 1973 to 1974 regarding the fashion of the 1960s at The London Museum. Quant later worked on the advisory council for the Victoria and Albert Museum from 1976 to 1978. Additionally, many books depict Quant’s life, including “Quant by Quant” (1966) and “Mary Quant: Autobiography” (2012). In 1990, Quant was awarded the British Fashion Council’s Hall of Fame Award for her contributions to the British Fashion Industry. She received well deserved recognition for her work.

In 2000, she retired from her company, Mary Quant Limited, which was founded in 1958. Her legacy remains unmatched and lives on in our clothes and in fashion history alike. Youth culture boomed with the designs of Mary Quant because they were like no other of the times. Her impact on fashion design is still seen in the clothes that we wear today.

Why Did I Choose to Research Mary Quant?

I chose to research Mary Quant because while I was an undergraduate student, I learned about Quant when writing my thesis regarding the intersections between fashion and feminism in the 1960s and 1970s. Miniskirts were vital to the narrative that women were “shortening their skirts” in fashion and in life. I couldn’t believe I hadn’t heard her name before, so I wrote this article to get her name out there and give credit where credit is due.