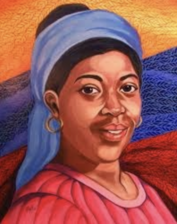 Juana Ramirez was born on January 12th, 1790, in Guarico, Venezuela as an enslaved worker. She is better known as Juana "La Avanzadora," or Juana "The Advancer" in English, for her valiant efforts and leadership on the frontlines of the fight against colonial rule in Venezuela. Juana was the daughter of Guadalupe, an enslaved woman captured from Africa and brought to work for the Rojas family plantation. Juana’s father is rumored to either be Andres Rojas or his brother, Francisco Rojas. She freed herself from the Rojas family plantation in attempts to escape severe working conditions and help others in similar positions. During the period following her escape, she stayed with Teresa Ramirez de Valderama who gave Juana care and her last name.

After freeing herself at a young age, Juana began organizing a combat group of 100 women to fight on the frontlines against Spanish soldiers who wanted to reclaim Venezuela as a colony; this is remembered as her most notable achievement. The artillery of women fought in many battles in Maturin, a northern city of Venezuela. The Battle of Alto de los Godos was fought against General Domingo de Monteverde in which Ramirez directed her women to charge at the Spanish invaders, successfully removing them and gaining independence. Ramirez’s act of freeing herself was extremely brave but not uncommon. Many enslaved Africans throughout North and South America escaped the plantations they had been forcibly placed on and fought against the oppressive enslavement system. 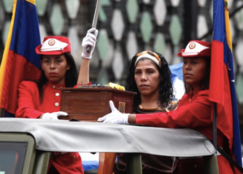 Juana Ramirez died in 1856 of an unknown cause, and was originally buried near Chaguaramal, her hometown. The ceremony was performed after her death by the people of Guarico who honored her with cacti on her grave. The plant marks the exact location of her burial and represents her example for the anti-imperialist struggles of modern day Venezuela. In current times, she is a role model to Venezuelan women and a symbol of persistence and courage to the nation and world. These sentiments are reflected in her recent and bountiful honors. A monument, "Juana La Avanzadora," was erected in her honor in Maturin, Venezuela. 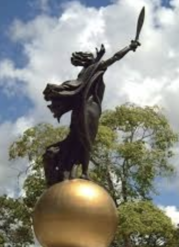 She was also recognized by the President of Venezuela, Nicolas Maduro, in June of 2015, as the next historic figure to be put into the Venezuelan Pantheon. Her remains were taken from her original resting place in the eastern Venezuelan state of Guarico to the National Pantheon in Caracas, Venezuela, making her the first black woman to receive this honor. This process brought many Venezuelans together to honor her and her work. Additionally, she is an inspiration to the working class Venezuelan women, "campesinas," who see Juana as an example of perseverance. In highlighting the black women who were vital in ensuring the survival of Venezuela, this act has begun to stop the perpetuation of the idea that Venezuela's most impactful citizens are wealthy, light-skinned citizens.

Today she is compared to other revolutionaries like Harriet Tubman—many call Ramirez the "Tubman of Venezuela." These similarities through history are also reflected in a Dominican Republic quote that Madeline Silvia believed to embody the essence of Juana and her ambition: "Ni pa’tras coger impulso" or "We don’t retreat even to gather steam" in English. Furthermore, Ramirez’s legacy has been used to back the socialist revolution by Maduro, Delgado, and Oropeza, the leaders of the Bolivarian socialist revolution. In sum, Juana "La Avanzadora" Ramirez's enduring legacy is just as prevalent in modern Venezuelan relations as in 1813 when she stepped on the battlefield. Her brave and heroic actions will forever impact Venezuela.

Why Did I Choose to Research Juana Ramirez?

As a Venezuelan-American, I wanted to choose a Venezuelan woman to research because understanding one’s heritage is immensely important. Personally, I have little knowledge of Venezuelan women and their contribution to Venezuela and the world, so I felt that researching a Venezuelan woman would be an enlightening way to educate myself. In addition to my personal desire, I have also never learned of Venezuelan or South American women in history classes or mainstream media. Therefore, in researching Juana Ramirez I wanted to begin to highlight how integral women were to history by researching and writing about a woman who helped ensure Venezuela’s Independence.