Vera Rubin was born on July 23, 1928 in Philadelphia, Pennsylvania. She lived with her father, who was an electrical engineer, her mother, who worked for a telephone company, and her older sister. When she was ten years old, her family moved to Washington D.C., where she spent many nights watching the stars outside of her bedroom window. She enjoyed staying up all night long to watch meteor showers, often creating maps of their trails. Her father was a positive influence on her and assisted her in building a telescope as well as accompanying her to astronomer’s meetings. By the time she entered high school, Vera was certain she wanted to pursue a career in astronomy.

In 1945, Vera enrolled in Vassar College where she studied astronomy, physics, and mathematics, and also where she met her soon-to-be husband. She received a Bachelor of Arts degree in 1948 and graduated as the only astronomy major that year. Vera then applied to Princeton for graduate school but was rejected because they did not accept women into their astronomy program. However, Vera did not let this discourage her, and instead earned her master’s degree from Cornell University. Her master’s thesis centered around the deviations from the Hubble flow, an observation which describes the outward motion of galaxies due to the expansion of the Universe. She then went on to earn her Ph.D. in 1954 from Georgetown University while taking classes at night to take care of her first child. Her doctoral thesis illustrated the idea that galaxies are found clumped together, rather than distributed uniformly. She became the first woman eligible to use the Hale Telescope in the famous Palomar Observatory at the California Institute of Technology. However, the topics in both her master’s and doctoral theses were viewed as controversial and subsequently ignored.

In 1965, Vera began working in a research position at the Carnegie Institution of Washington, where she teamed up with Kent Ford, an astronomer who had built a remarkable spectrometer. She observed and studied the orbital speeds of stars in over sixty spiral galaxies, finding that stars on the outer edges of the galaxies, far from the center, were moving just as fast as the stars in the inner regions, contradicting her previous beliefs that stars further from the center would move slower. She deduced that an extremely large amount of unseen matter, or “dark” mass, must be present in the outer regions of galaxies, holding them together. Vera’s findings were accepted by astronomers due to the straightforward observations. Throughout the rest of her career, she continued to study and discover new galaxies with peculiar characteristics. 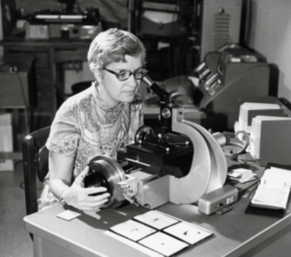 In honor of her groundbreaking discoveries and achievements in astronomy, Vera was elected to the National Academy of Sciences in 1981 as the second woman astronomer ever to be admitted. She was also awarded the National Medal of Science in 1993 by President Bill Clinton. She raised four children, each of whom went on to earn doctorate degrees in the sciences.

Vera passed away on December 25, 2016 at the age of 88 due to complications associated with dementia. Her legacy is immortalized in the universe, as an area on Mars called Vera Rubin Ridge and Asteroid 5726 Rubin are named in her recognition. In addition, the Vera C. Rubin Observatory, which focuses on the study of dark matter, was renamed in honor of her accomplishments.

Vera Rubin was motivated by the struggles and discrimination she faced on the basis of her sex throughout her education and career in a male-dominated field. She was an inspiration and advocate for women in astronomy and other scientific fields, and her accomplishments continue to encourage females to pursue their dreams.

Why Did I Choose to Research Vera Rubin?

I really admire Vera Rubin because of her perseverance and hard work. Even when she faced multiple obstacles, most of which occurred because she was a woman, she did not give up on her dreams to be an astronomer but rather pushed herself even harder. In addition, I have always been very interested in astronomy, and I really loved researching one of the most inspirational and influential women in the field.