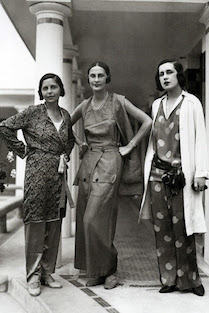 Elsa Schiaparelli was born in Rome, Italy, on September 10th, 1890, and raised in the architectural legend that is the Palazzo Corsini. Her father was the Director of the Lincei Library and a professor specializing in Oriental Literature, and her mother was a descendant of the affluent Medici family. Her uncle was a renowned astronomer who had a crater on Mars designated in his name. Surrounded by intellectual and aristocratic relatives, Elsa Schiaparelli decided to study philosophy, although she believed her true calling was acting. While growing up in Rome, Elsa Schiaparelli attended a multitude of convent and private schools, often facing suspension or expulsion (for culturally provocative and radical poems). At 21 years-old, Shiaparelli was admitted to the University of Rome to study philosophy. It was during this point in her education that she began to test the societal expectations under which she was raised, publishing a book of poems titled Arethusa, which commented on human sexuality.

Despite being constantly surrounded by sophistication and elitism, Schiaparelli expressed an inner drive for creative and personal freedom. This crave for glamour and independence propelled her towards London, after she refused familial pressure to marry a Russian nobleman. After leaving Rome, Elsa Schiaparelli married a Breton-Polish-Swiss Count after attending his public theology conference. Their marriage was anything but happy, filled with infidelity and abuse. She gave birth to her only daughter in 1920 and the family decided to move to New York. Almost immediately after arriving in the United States, the Count abandoned Schiaparelli and their daughter, leaving the mother-daughter duo homeless and broke. However, during her previous voyage to North America in 1916, Schiaparelli had befriended Gabrielle Picabia, marking her introduction to the world of Surrealism and artistic fashion.

Elsa Schiaparelli worked rounds of small, minimum-wage jobs to provide for herself and her daughter while creating and selling pieces of freelance clothing. Almost in the worst depths of poverty in 1922, Schiaparelli decided to move to Paris, launching her crusade to break into the competitive world of fashion. Finally, in 1927, she opened an atelier along the Parisian Rue de l'Université, which featured hand-knit sweaters with a hybrid American-European style. Immersed in the Surrealist culture of Paris and reintroduced to New Yorkers, Schiaparelli met Paul Poiret. He urged her to earnestly enter the fashion industry as a career field. One of her early designs was a black and white trompe l’oeil (a seemingly third-dimensional optical illusion printed on a piece of clothing) paired with a square collar and red bowknot, which caught the attention of an American buyer, encouraging the beginning of a steady flow of customers. She moved her atelier to 4 rue de la Paix and named the shop “Schiaparelli Pour la Ville - Pour Le Soir.” Her unique and acclaimed sweaters, skirts, and accessories attracted the attention of the wives of millionaires, theater and movie stars, socialites, and fashion magazine editors. One of those fashion moguls was Carmel Snow, the then-fashion editor for American Vogue and editor-in-chief of Harper’s Bazaar. Snow published photographs of Schiaparelli, officially expanding her empire overseas. Furthermore, Michel de Brunhoff, the editor-in-chief of Paris Vogue, assimilated her into a group of French socialite women, further spreading her market into high society. By 1932, ten years after her move to Paris, Elsa Schiaparelli had 400 employees creating up to 8,000 garments per year, all from 4 rue de la Paix. 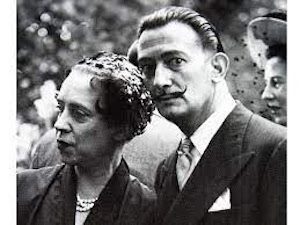 Throughout the 1930s, Elsa Schiaparelli reinvented her design trademark to represent the modern and intelligent women to whom she catered to. She created the famous and timeless accent for broad shoulders, often dressing up the shoulders with pads, feathers, drapes, fringes, and epaulettes. She broke ground for women’s fashion by pairing a coat with an evening dress, enlivening an idea that would urge the international view of women as elegant and feminine, yet professional and intellectual. Her growing popularity in North America brought her back to the United States, where her garments flooded upper-middle class department stores and boutiques and satisfied the outrageous minds and wallets of a wealthier, yet smaller, audience. By 1935, Schiaparelli’s atelier on the rue de la Paix was producing 10,000 garments annually, and in 1936, she bought Number 21, Place Vendôme. On the building’s ground floor was a boutique, which Salvador Dali, Spanish Surrealist artist, strategically decorated. Nearing the end of the 1930s, Elsa Schiaparelli truly harnessed her eccentric imagination. From her clothing pieces to her boutique, Schiaparelli embodied what it meant to be a defiant, resilient, versatile, and intelligent woman.

In 1937, Elsa Schiaparelli released the fragrance “Shocking,” creating a perfume that was such an amalgamation of life that it redefined its very title. Once again, she forged down an unknown path, taking pride in a product that somehow embodied Surrealism, her travels, and everything outrageous yet beautiful. In 1941, Schiaparelli relocated again to New York, then to Paris to relaunch her fashion company. However, her designs that ruled the 1920s and 1930s fell short of new designers like Christian Dior and Cristobal Balenciaga. Dior displayed an uncanny similarity to Schiaparelli, combining American and European designs to create the ultimate shock factor of an outfit; he was able to do so with a more wearable approach, ensuring Dior’s longevity. In 1954, Schiaparelli went bankrupt and her empire was forced to bow out of the industry. Elsa Schiaparelli’s designs were far ahead of their time, however, they cleared public judgement of uniqueness for future designers. Without Schiaparelli, the truth that fashion is an art form would be buried under pounds of safe patterns and basic materials.

Why Did I Choose to Research Elsa Schiaparelli?

I chose to research Elsa Schiaparelli because she knew the true meaning of fashion and wasn’t afraid to push the boundaries of experimentation. Without her, the modern day pantsuit and iconic shoulder pads would never have existed; through these designs, women were empowered to grasp their intelligence and futures. Schiaparelli often is overlooked by the elegance of Coco Chanel, but her creations are just as innovative and timeless. Elsa Schiaparelli had the mindset that if something is beautifully absurd, it can never go out of style.