Na Hye-seok was born in 1896 as the fourth child of a wealthy family in Suwon, South Korea. From a young age, she enjoyed drawing. Although it was uncommon for women in her time to receive higher education, Na was privileged enough to attend Jin Myeong Girl’s High School and even study abroad. Her older brother inspired her to go to Japan and attend Tokyo Arts College, where she organized the Association of Korean Women Students. She graduated from the school in 1918 and became the first Korean woman to receive a Bachelor of Arts in Western painting. 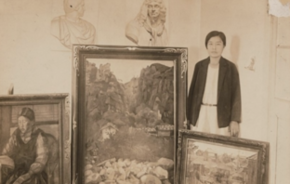 After returning to Korea, Na Hye-seok worked as an art teacher and was a prolific oil painter. She regularly submitted her works to Chosun Art Exhibition and was awarded multiple times, proving her talent. She also published a short story, Kyong Hui, which was her first feminist literary work. The story revolves around a woman who returned home from a Japanese university only to face the members of her community questioning the necessity of girl’s education. This piece reflects Na Hye-seok’s own reality as a woman who was educated, yet, restricted by the gender norms of the conservative Korean society.

“I’m a woman, and I am a Korean woman — a woman shackled by Korean society’s family conventions. If a woman tries to stand on her own, she will feel pressure from all quarters, and if she aspires to accomplish something, she will be criticized from all sides.” From “Kyong Hui”

In 1919, there was a massive Korean uprising with thousands of people crying for Korean independence from Japanese colonial rule. Na Hye-seok took part in this movement and was jailed for six months. Following her release, Hye-seok met other women with similar radical ideas and they decided to launch a magazine by and for new women. (The term “new woman,” which originated from Europe in the late nineteenth century, was used to call those women who had received modern education and resisted traditional gender roles) The title of the magazine was Sinyoja (New Woman). These women, including Na Hye-seok, focused on the intersection of the women’s rights movement and Korean independence movement. They believed that the liberation of women was connected to the independence of her nation from colonial rule.

In 1920, she married the very lawyer who had represented her when she was in jail, Kim Woo-young. Na Hye-seok presented four conditions for marriage to her husband: to love her forever, to let her keep painting, to make sure that they live away from her mother-in-law, and to set up a tombstone for her former lover. This was quite unconventional in Na Hye-seok’s time since wives were expected to obediently serve her husband and mother-in-law. After the marriage, she continued to avidly draw and write. In 1921, she held her first solo exhibition with seventy oil paintings. This was the very first time that a female artist held a solo art exhibition in Korea. Na Hye-seok’s exhibition was a huge success: on the first day of the exhibition, more than 5,000 people came to see her works. In addition to oil paintings, Na Hye-seok also drew illustrations for the Korean translation of “A Doll’s House” by Henrik Ibsen. This inspired her to write a poem titled “Nora.” 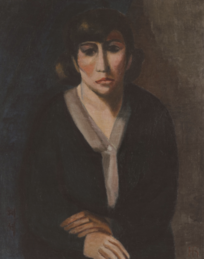 In 1927, Na Hye-seok flew to Europe and stayed there for three years. Seeing the lives of European women and their feminist movement was an awakening experience for Na Hye-seok. In Paris, she fell in love with a man named Choi Rin, and her husband divorced her. Although Hye-seok’s husband was also in a relationship with another woman, only women were punished for adultery in Korea at the time. Hye-seok thought divorce was not the best choice for their children, but Kim Woo-young threatened Hye-seok that he would sue her for adultery if she rejected divorce. Following her divorce, Hye-seok published an essay titled “A Divorce Confession.” In this piece, she acknowledged her affair with Choi Rin and wrote openly about her sexual desires. She criticized the double standard of Korean society, which stigmatized women for their sexuality, but tolerated men’s affairs. However, her radical idea was obviously unacceptable to the majority of Korean people, and she was shunned from her own family.

The last few years of Na Hye-seok’s life are not very well known. In 1948, she died alone in a charity hospital. For decades, her life and works did not gain much attention. Her reputation as an unfaithful woman limited people from seeing the true value of her artworks and ideas. Then, in the early 1970s, a journalist named Yi Ku-yol published a book which contained numerous essays, novels, and poems of Na Hye-seok.

In a time when women were easily stigmatized for simply being themselves, Na Hye-seok dared to shatter stereotypes and claim her voice. Her life was not perfect, but she showed that women are humans too: multifaceted beings with minds, souls, talents, and ambitions.

Why Did I Choose to Research Na Hye-seok?