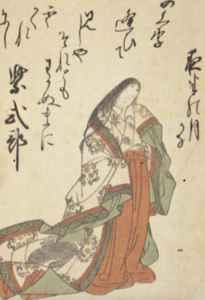 Murasaki Shikibu was born in Kyoto, Japan, in c.978, and is the author of the first novel in the world. Murasaki Shikibu is not her real name, however, due to lack of information, we only know this as her surname. Growing up, Murasaki was exposed to many experiences that played a crucial role in her life and were unusual for girls her age. Her father, Fujiwara no Tametoki, was an influential governor or statesman who, unlike many other families, raised his children after his wife died. It was imperative that her father was the sole caretaker of the family because at the time, it was normalized that commonly children were raised by their mothers while living apart from their fathers. Through her father, Murasaki received a comprehensive education on Japanese poetry, Buddhist writings, Chinese compositions and Kana writing, all of which were topics not taught to women. In addition, Muraski spoke Chinese, which was rare since traditionally, in Heian culture, only males spoke and learned the language. Women were normally taught how to speak and write Japanese, because it was seen as a skill with very little respect. If her father had not given her a thorough education, Murasaki would have been expected to marry into an imperial family as a young teen.

When she was twenty five years old, which was a much later age than expected, Murasaki married her distant second cousin, Fujiwara no Nobutaka. Despite his poor reputation, the two had a happy marriage and bore a daughter, Kenshi. However, their marriage life ended shortly after two years, when Nobutaka unexpectedly died from the cholera epidemic. His death hit her hard, as she wrote in her diary, "I felt depressed and confused. The thought of my continuing loneliness was quite unbearable (Famous People)." During this hard time of her life, Murasaki turned to writing as a comfort, and began writing the first novel in the world, The Tale of Genji. 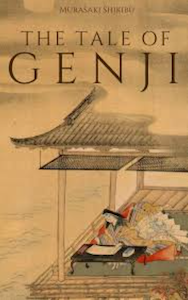 The Tale of Genji is a complex lengthy novel of about 1100 pages, with approximately 54 chapters, that took Murasaki twelve years to write. The book reveals the details of Japan’s upper-class society through Murasaki’s experiences at the imperial court. It takes place during the Heian period, a time during which Japan's aristocrats prospered, and follows the story of an emperor’s son, Genji. Much of the book describes Genji’s scandalous love affairs with numerous women, however, he eventually regains a high position in the kingdom after being kicked out. During his exile, he met the love of his life, Murasaki Ue, and built a villa, with the hope of a meaningful future with her. Despite a change of his behavior, Murasaki Ue dies, leaving him in grief and Genji eventually dies. The story then follows the adventures of Genji’s son and grandson, who become rivals when they fight for a common love interest, the princess Ukifune. The novel, which starts as a happy, romantic fantasy, turns into a dark analysis of humanity after Ukifune unsuccessfully commits suicide. Even though Ukifune lived and went on to live as a nun, her attempt affects Genji’s grandson. The end becomes a psychological analysis as it dives into Genji grandson’s grief from unrecruited love.

Despite the fact that The Tale of Genji was unfinished by Murasaki’s death, and so the last fourteen chapters were written by another author, the book has left an impactful role in Japanese literature. It was popular when it was released, and has played a crucial role in the development of Japan’s culture, art and writing. Around 1000 years after its creation, The Tale of Genji is still a well known book that much of Japan’s youth reads, and has been turned into multiple variations of graphic novels. Murasaki contributed to a new era of change for women’s roles in society. She participated in literary salons, where she connected with high ranking women who had interest in writing. Her participation helped start a new period of women expanding in male dominant fields along with their own education. During her time in the imperial palace, Murasaki became a tutor for the empress and was able to teach her Chinese. This form of education was regarded as unthinkable and controversial because it was uncommon for women living in the upper class society of Japan during the 900s. Thus, she earned the nickname, “The Lady of Chronicles,” a name with derogatory connotation. By obtaining the nickname, she was often glared at and talked about for “showing off” her knowledge of Chinese and Japanese literature. 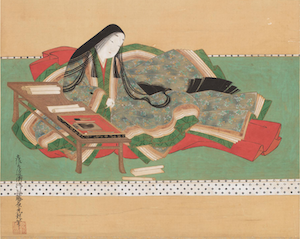 The details of Murasaki’s later life and death are unclear. There are multiple theories on what happened after her retirement; one theory includes her moving to a country mansion or temple with the Empress, after the Emperor’s death and continuing her writing there. Her death is estimated to be around 1014-1031, with her age between 30-50 years old.

By working in the royal court, Murasaki started a change in the Japanese upper class society. Traditionally, women lived their lives almost completely separate from men and if they wrote, it would be to their husbands. However, as Murasaki and many more court ladies started to work professionally on Japanese literature, a new era was created. This era consisted of women branching off from the traditional life of just raising children and instead developing a passion in literature. In addition, she kept a diary during her time at the royal court, which included 128 published poems, and wrote a couple more books, such as “The Diary of Lady Murasaki.” Her recordings of the Heian royal court gave the future world insight of what it was like to live as a woman in the 11th century. By teaching the empress chinese, taking place in literacy salons and working in the palace, Murasaki started a new period of women expanding in male dominant fields. In addition, a lot of our comprehensive knowledge about Henian court life is from her experiences.

Why Did I Choose to Research Murasaki Shikibu?

As a young child, I read about Murasaki Shikibu and she kept a place in my mind. Many years later, it still amazes me about how she wrote the first novel in the world yet I have never learned about her in any of my history classes. I’ve always wanted to research women who have broken barriers in male dominated societies that are also part of my asian heritage, and Murasaki Shikibu is a perfect example. After learning about the accomplishments she made despite all the norms her society had at the time motivates me to continue fighting for women’s rights. I wrote about her in hope that her story continues to inspire many more and is never forgotten.

‌Borgert, A. (2018, October 12). Women in history: Murasaki Shikibu. The Hilltop Monitor. Retrieved May 23, 2022, from https://hilltopmonitor.jewell.edu/women-in-history-murasaki-shikibu/.

‌Woodward, K. (2019). What would she do?: Real-life stories of 25 rebel women who changed the world. Carlton Books.