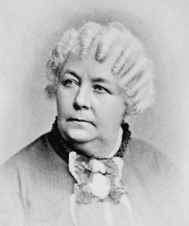 Elizabeth Cady Stanton was born on November 12th, 1815, in Johnstown, New York. Her father Daniel Cady was a lawyer but unfortunately, made it very clear that he wanted a son. She received her formal education at the Johnstown Academy and at Emma Willard's Troy Female Seminary in New York. Elizabeth gained most of her informal legal education by discussing with her father and listening to his conversations with colleagues and guests. She learned about the discriminatory laws that women lived under, and she became determined to earn equal rights for the sexes.

In 1840, Elizabeth married Henry Stanton, an abolitionist and lecturer. She became very active in the anti-slavery movement and worked with many abolishionists including Sarah and Angelina Grimke and William Lloyd Garrison. Stanton and Henry had seven children while he studied and practiced law, and they eventually settled in Seneca Falls, New York.

Stanton organized the first women's rights convention in the United States called the Seneca Falls Convention in July 1848 with the help of Lucretia Mott and several other women. The attendees of the meeting drafted the “Declaration of Sentiments” to propose that women should be given the right to vote. 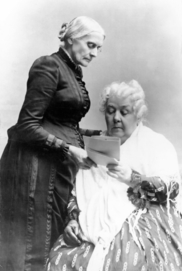 During the Civil War, Stanton focused her efforts on abolishing slavery. After the war, however, she dedicated the majority of her time to the fight for women’s suffrage. She began writing and lecturing about gender equality. Later, she met Susan B. Anthony—a leader in promoting women's rights such as the right to divorce and the right to vote—in the early 1850s.

In 1868, she worked with Susan B. Anthony on The Revolution, a militant weekly paper. Stanton and Anthony formed the National Woman Suffrage Association (NWSA) in 1869, an organization that fought for women's rights to vote. Stanton was the NWSA’s first president, which she held until 1890. During that time, the organization combined with another suffrage group to form the National American Woman Suffrage Association. Stanton became the president of the new organization for two years.

Stanton traveled around the world to give lectures and speeches, advocating for women's voting rights in the Constitution. Stanton and Anthony also worked on the first three volumes of the History of Woman Suffrage. 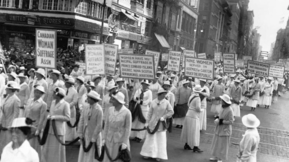 In addition to helping with the suffrage movement, Stanton became very interested in her religion and how it played a part in the struggle for equal rights for women. For her whole life she had argued that the Bible and religion denied rights for women. She teamed up with her daughter, Harriet Stanton Blatch, to publish a critique called The Woman's Bible, which was released in a total of two volumes and generated much controversy.

On October 26, 1902 Stanton passed away due to heart failure. Before she died, she said she wanted her brain to be donated to science upon her death to debunk claims that the masses of men's brains made them smarter than women. Although she never got the right to vote in her lifetime, she left behind a legacy that paved the way for many other women. Almost twenty years after her death, her vision of women’s suffrage came true when the 19th Amendment was passed on August 18, 1920.

Why Did I Choose to Research Elizabeth Cady Stanton?

I chose to write about Elizabeth Cady Stanton because her hard work and dedication to gender equality inspires and pushes me to stand up for what I believe in.