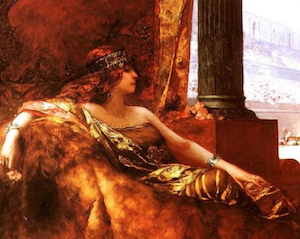 Empress Theodora, who would become one of the most influential women in history, was born between 497 and 500 C.E. somewhere on the outskirts of the Byzantine Empire. There is very little available knowledge of her childhood since she was born into a very low socioeconomic class. However, it is known that her father, Acacius, tended to bears at the Hippodrome at Constantinople, which was a popular social hub and chariot racing arena. In addition, her mother worked there as an “actress”. This could have meant an actual actress or a dancer and acrobat, and was usually also synonymous with a prostitute. Either way, her job was not considered a respectable profession. From a young age, Theodora also worked with her mother in the same profession to help support her family. As a result, her later public image was somewhat tarnished.

Despite being at the bottom of the social hierarchy, she was ambitious and took advantage of every opportunity to move up in society. When she was 16 years old, she was invited to travel to North Africa as the “companion,” or mistress, of a government official, where she stayed for four years. On her way back to Constantinople, she stopped at Alexandria, Egypt, where it is speculated that she converted to Monophysitism, a form of Christianity. Possibly as a result of her new religiousness, she gave up her old career as a prostitute when she returned and began working as a wool spinner. 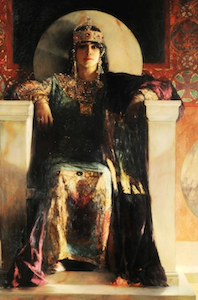 It was around this career change that she first came to the attention of Justinian, the heir to the throne of the Byzantine Empire. Some sources say he at first came to know of her at her job, and they developed a relationship, possibly an affair, before Justinian married her against the wishes of many and despite the traditions of nobles not marrying those of a lower class. Although still rare, it is also possible that there could have been beauty contests arranged in the Byzantine court for the purpose of getting someone married, and sometimes even women of lower classes would participate, such as Theodora. Regardless, many people were unhappy that Justinian's wife would be a former actress. One of the most vehement opponents to the match was Empress Lupicina Euphemia, who conveniently died while the couple was trying to get married. Furthermore, Justinian changed several laws, one in particular saying that anyone with a position of a senator or higher could not marry a woman of that low of a class. He also got the government to legitimize Theodora’s illegitimate daughter and possibly son as well. Eventually, Justinian and Theodora were married in 527 C.E. when Emperor Justin I died. They had a joint coronation ceremony on April I, 527 C.E., at the Hagia Sophia, one of the many architectural projects Justinian sponsored. The ceremony was lavish and marked the beginning of a new and prosperous period of the Byzantine Empire. From the moment they were married, Theodora was treated as a co-ruler by Justinian, equal partners in wit, ambition, energy, and intellect.

During their reign, there was a flourishing of the arts, especially in architecture. The Hagia Sophia was revitalized by Justinian between 532-537 C.E., helped by his educated architects. They were well-versed in physics and engineering as well as math, which helped them create a lasting structure that still impresses many today. Other buildings were also commissioned by the couple during their rule, which showed their commitment to cultural advancement and the arts. 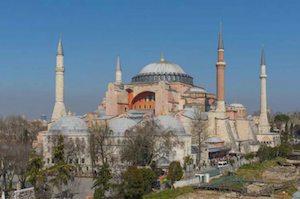 Despite their success, one of the main problems during the period of their rule were religious conflicts. One famous example of these conflicts was the Nika revolts in January of 532 C.E., which were incited by the Green and Blue factions of the Hippodrome in Constantinople. The two groups had recently gotten into a fight, and Jusitnian refused to pardon them. His refusal to pardon, combined with complaints about high taxes that funded the Emperor’s constant military campaigns, caused the two factions to band together and revolt. The revolt caused the destruction of almost the entire city. In response, many officials fled, and the Emperor considered doing the same. Theodora, on the other hand, convinced him to stay and crush the protest. According to one of the only accounts of her life by 6th Century Byzantine historian Procopius, she said, “I do not care whether or not it is proper for a woman to give brave counsel to frightened men; but in moments of extreme danger, conscience is the only guide. Every man who is born into the light of day must sooner or later die; and how can an Emperor ever allow himself to become a fugitive? If you, my Lord, wish to save your skin, you will have no difficulty in doing so. We are rich, there is the sea, there too are our ships. But consider first whether, when you reach safety, you will not regret that you did not choose death in preference. As for me, I stand by the ancient saying: royalty makes the best shroud.” Because of her counsel, Justinian stayed and crushed the revolt. This also gave them a chance to rebuild the empire to become even better than before, including giving them the opportunity to rebuild the Hagia Sophia, as aforementioned. Theodora’s position as a political equal and closest advisor was shown by her ability to sway the Emperor to stand his ground and defend his policies. 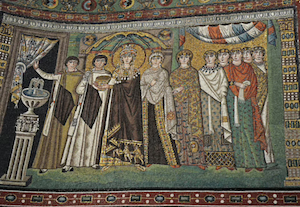 Theodora’s influence over the administration meant greater protections for women in the Empire. Possibly as a result of her background of being an actress, during her reign, Theodora strove to make life safer and better for women. She passed laws that closed brothels, created safe havens for women, gave them more autonomy through divorce laws and the right to inherit property, outlawed forced prostitution (which was very common), and made rape such a severe crime that it warranted the death penalty. Monophysites were also protected by Theodora, as she was one, and she helped build safe places for them to worship in peace even though her husband was a devout Orthodox Christian.

However, Theodora’s story is also shrouded in controversy. It is speculated by many that she was ruthless in getting rid of her political enemies or anyone who posed a threat to her or her husband and their rule. One famous example is her vendetta against a successful general, Belisarius, for his position as a possible rival to the throne in the case that Justinian died. Others include Queen Amalasuntha of the Goths and Pope Silverius. It is important to note, however, that the only evidence for the last two come from accounts from the historian Procopius’ Secret History. It is well known that Procopius had a grudge against the Empress Theodora, describing her and her husband as terrible leaders of the Byzantine Empire, and only parts of his work are accurate while others are simply speculation with no facts to support them. As Cartwright describes in his article on Theodora, “It is perhaps important to consider, too, that our knowledge of Theodora only comes from male authors and a woman performing any other role than the traditionally submissive one in Byzantine society was bound to be, at best, disapproved of and, at worst, outright demonised.”

In 548 C.E., at unfortunately just around 50 years old, Theodora died of what was probably cancer or gangrene. Her death devastated Justinian, and he never remarried. Despite the fact that she did not give him any heirs, her illegitimate daughter and grandsons were given prominent positions in the administration by Justinian. In the 17 years he ruled alone after her death, Theodora’s influence was clear. Justinian continued to protect the rights of women and Monophysites despite his own religious inclinations. Although he stayed a good ruler after her passing, it was clear that he was never as good as when he had Theodora by his side and they had reigned together.

One of the most influential women in history, Empress Theodora of the Byzantine Empire remains someone who deserves to be common knowledge. Her equal status and skill with her husband is almost unmatched in history, and this partnership caused their reign to flourish and expand the Empire while doing charity work and improving human rights and specifically, rights for women.

Why Did I Choose to Research Empress Theodora?

After researching other strong women from the Byzantine Empire, like Anna Komnene, I wanted to research another woman from the time period. After briefly reading about Empress Theodora, I became very interested to learn more about her fascinating life.

Brooks, S. (2009, April). The Byzantine State Under Justinian I (Justinian the Great). The Met Museum. Retrieved September 21, 2020, from https://www.metmuseum.org/toah/hd/just/hd_just.htm