Trưng Trằc and Trưng Nhi were sisters born in Giao Chi, located in rural northern Vietnam around 12 C.E. (although their exact birth dates are unknown, we know that Trằc was older than Nhi). Since their father was a prefect, a person of high authority or command, of the Mê Linh province and a descendant of a military family, Trằc and Nhi were expected to be highly educated young Vietnamese women. Their mother, who was also from a family with military traditions, taught them several fighting techniques, such as the martial arts. The sisters excelled in literature as they were set to inherit their father’s titles and land upon his death. A prefect of a neighboring province came to visit Mê Linh and brought along his son, Thi Sách; Thi Sách and Trằc fell in love and soon married. 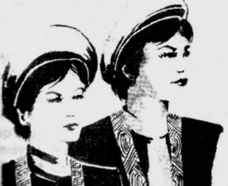 Trằc and Nhi grew up during the thousand-year Chinese occupation of southern China and several southwest Asian kingdoms. Under the control of the Han Dynasty, the Chinese had overthrown the Vietnamese government in 111 B.C.E. As a result, the Vietnamese people suffered under tyrannical conquerors and were forced to assimilate into Chinese culture. In particular, To Dinh, a Chinese governor who ruled over the Mê Linh province, demanded ridiculously high taxes on necessities, such as salts and fishing in rivers, from local peasants.

Thi Sách was planning a rebellion against the Han Dynasty’s occupation in Vietnam by mobilizing the local aristocracy to revolt. Unfortunately, the Chinese government discovered his plot, and To Dinh responded by executing Thi Sách, hanging his body from the city gates as a warning to others that wished to rebel. However, this did not scare Trưng Trằc at all. In fact, it motivated her and her sister to continue where Thi Sách left off in leading the growing rebellion.

After gaining the support of several Vietnamese lords, Trưng Trằc and Trưng Nhi defeated a small Chinese military unit from their village. Despite this victory, they knew that they would require a much larger quantity of people if they had a standing chance against the Han forces. As they journeyed throughout Vietnam, the Trưng sisters were well-received by everyone they encountered, proving their worth through several acts of bravery. One such act was killing a tiger and using the tiger’s skin to encourage more people to join their rebellion. In 39 C.E., Trưng Trắc and Trưng Nhị gathered an army consisting of 80,000 people; the majority of these people were women, and the sisters chose 36 women as generals whom they personally trained in the art of war. Within a year, the sisters and their army had taken back around 65 northern citadels from the Chinese, beginning their rebellion at the Red River Delta and then quickly spreading to other tribes along the north and south coast of Vietnam. By 40 C.E., the Trưng sisters had successfully driven the Chinese out of Vietnam. 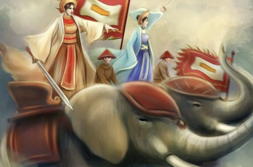 Deemed “the queens of the Vietnamese nation” by the Vietnamese people themselves, the Trưng sisters declared themselves rulers of an autonomous state that extended from southern China to modern-day Hue. The people also renamed Trưng Trắc as Trưng Vương or “She-king Trưng.” Trắc established her royal court in Mê Linh and restored a form of Vietnamese government that aligned with the country’s traditions and culture. She also abolished the burdening tribute taxes imposed by To Dinh.

Frustrated by their defeat, the emperor of the Han Dynasty, Guang Wu Di, sent one of his best military generals, Ma Yüan, to reconquer Vietnam from the Trưng sisters. For nearly three years, the sisters fended off all Chinese attacks on their borders due to their excelled martial arts skills and battle tactics, but alas, they were undersupplied, undertrained, and outnumbered.

According to legends, the nearly-all women army was met with a Chinese army that rushed into the battle… naked. The sight of such impudence caused many Vietnamese female warriors to flee the battlefield, allowing Ma Yüan’s seasoned forces to defeat the Vietnamese army at Lang Bac, which was near present-day Hanoi. The Trưng sisters knew very well that they were beaten, retreating to Hat Mon, now known as Son Tay. 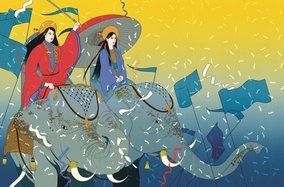 There are many different accounts regarding Trưng Trằc and Trưng Nhi’s deaths. According to “Book of the Later Han,” the sisters were decapitated by Ma Yüan and their heads were sent back to the Han capital. Another source stated that they died fighting after being deserted by their army. Other sources claimed that Trằc and Nhi disappeared into the sky after they became sick. However, the most popular account was that they committed suicide by drowning themselves at the junction of the Day and Red Rivers in 43 C.E. because they refused to face defeat and shame at the hands of the Chinese military.

Trưng Trằc and Trưng Nhi are regarded as the first liberators of Vietnam in stories, poems, and plays, inspiring centuries of fighters for Vietnamese independence. Scholars and historians cite the Trưng sisters to show that ancient Vietnamese society lacked many obstacles for women assuming leadership roles, in comparison to other East Asian nations. Many temples and monuments are dedicated to the Trưng sisters, often being depicted as riding on elephants into battle. A district in Hanoi City and a yearly holiday in February, both called Hai Bà Trưng, are named after the Trưng sisters as well as numerous streets and schools across Vietnam.

Why Did I Choose to Research Trưng Trằc and Trưng Nhi?

Growing up, I was always curious about my home country, Vietnam. However, my family didn’t have many pleasant memories to share about their homeland, so I was left in the dark about most of Vietnamese history. I already knew that Vietnamese women were historically known for not being afraid to vocalize their disapproval of Chinese assimilation of Vietnam, but researching about Trưng Trằc and Trưng Nhi has made me even more proud of my Vietnamese heritage, one that was built upon the accomplishments of women. It is thanks to these fearless women and so many others before me that I am able to live in a world where I can say that I am proud to be a Vietnamese-American young woman.