Harriet Tubman became known for her incredible bravery as a conductor of the Underground Railroad network when she led enslaved people to freedom. On top of being an icon of the abolitionist movement, she also served as a nurse, scout, and laundress during the civil war. 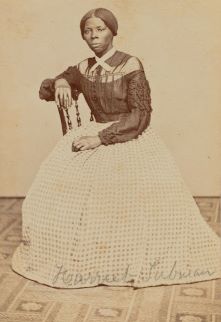 Originally known as Araminta Ross, she was born into slavery around 1820 (her exact birth date is unknown) in Dorchester, Maryland. She later adopted the name Harriet Tubman before her escape to freedom. Both her parents, Harriet Green and Benjamin Ross, were enslaved people. She had four sisters and four brothers. From the young age of five, Harriet was hired into domestic work, such as being a nursemaid. She was often sick and would be sent back home to her parents, then repeatedly hired by different households. By the age of 12, she was sent to work in the fields to do physical labour on plantations. Around that age, she had already started to become resistant to to the ideals of slavery. One day she saw an enslaved person trying to escape in a grocery store and, in order to protect them, she blocked the way of the overseer who was ready to confront the fugitive with a heavy metal weight. He hit Harriet in the head instead, and the enslaved person managed to flee. Harriet never recovered from the head injury, and throughout her life, she experienced seizures, sleeping spells and vivid dreams.

In 1844, Harriet married John Tubman, a free African American man. This marriage, however, was not legal since Harriet was still an enslaved person. In 1849, Harriet heard rumours that she would be sold and decided to flee to Philadelphia to seek freedom. Her husband refused to join her, so she travelled alone. At that moment, she decided to change her name from “Araminta Ross'' to “Harriet Tubman”; the decision to change names was a common practice among fugitive enslaved people. During her journey to Philadelphia, Harriet was helped by the Underground Railroad network for transportation and safe shelter.

Once Harriet Tubman crossed the Mason Dixon Line, which was the entrance border to the North states, where slavery was illegal, she said “There was such a glory over everything; the sun came like gold through the trees, and over the fields, and I felt like I was in Heaven.” Finally, she was free and wanted to share that feeling of freedom with others. In 1850, she decided to go back to Maryland to help her relatives cross the Mason Dixon Line. She embarked on perilous journeys and over the decade (from 1850 to 1860), helped 70 fugitive enslaved people reach Canada along the Underground Railroad. She crossed the border around 13 times and became known as the “Moses of Her People.” 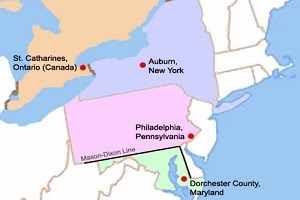 On top of being extremely brave, she was also an inventive and strategic conductor of the Underground Railroad network. For example, she always fled at night, specifically on Saturdays, since the disappearances would only appear in the newspapers on Mondays. Consequently, the fugitive enslaved people would have time to cross the border before anyone would notice they escaped and start looking for them. Through her different journeys, Harriet managed to build her own network of abolitionist friends who would help her mission. She made sure to carry a gun with her for protection, but also to prevent fugitives from turning back and jeopardising the operation. She was very successful, as it is claimed that she “never lost a fugitive.” Harriet Tubman was a devoted freedom fighter and became a symbol of the abolitionist movement.

Harriet Tubman’s work, however, did not stop after her last rescue mission in 1860. From 1862 and 1865, during the American Civil War, she decided to serve as a nurse, scout, and laundress. In 1863, she spied on the territory of Confederate states, and guided a troop of soldiers to the Combahee River. Thanks to her spying missions, the soldiers could map the area, plan an attack and more than 700 enslaved people were set free during what became to be known as the Combahee River Raid. The knowledge for escape routes she gained, as a conductor of the Underground Railroad, was of great value during the Civil War. 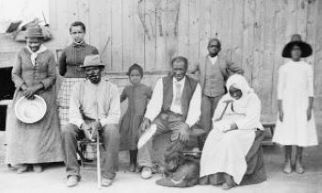 Harriet Tubman finally settled in Auburn after the Civil War, where she hosted orphans and elderly people. One of the people who sought shelter in her home was Nelson Davis. After her husband John Tubman passed away in 1867 and meeting Nelson Davis, she decided to remarry in 1869. In addition to hosting people in her home, Harriet joined meetings and gave speeches for the Women’s rights movement. Through her support, she played an important role in the struggle for women’s suffrage and especially fought for the rights of African American women.

On March 10, 1913, Harriet Tubman died of pneumonia. Before passing away, she told the people surrounding her: “I go to prepare a place for you.” Until her death, her compassion for other people and selflessness was incomparable. She was buried at Fort Hill Cemetery in Auburn, New York with military honors.

Why Did I Choose to Research Harriet Tubman?

Growing up in Europe, I had never learnt about the achievements of Harriet Tubman. After hearing about her and researching more, I realized how important it is for her name to be known worldwide. She is a true inspiration, and her dedication to fight for her own life and the lives of so many other enslaved people, despite the risks, displays her outstanding courage, selflessness, and desire for justice.