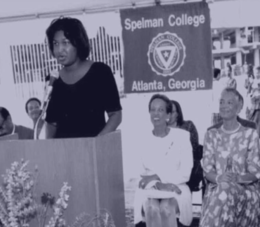 Although she was raised in Georgia and Mississippi, Stacy Abrams was born in Wisconsin, on December 9th, 1973. Her childhood was rooted in community service and faith. Her parents were Methodist ministers and had graduated from Emory University. Despite her family’s fiscally strained upbringing, Abrams’s parents taught her to always help the less fortunate, a value that sparked and guided her activism. Moreover, Stacy Abrams’s parents were thoroughly involved in the civil rights movements, advocating for voting equality and representation for Black communities. Her parents’ civic foundation has been reflected throughout her career, as she continues the fight for a fair voter turnout during elections. Similar to Stacey Abrams, her sister Leslie is involved in the political scene, serving as the United States District Judge of the United States District Court for the Middle District of Georgia. Her oldest sister Dr. Andrea Adams is an author and professor at Centre College in Kentucky, while her youngest sister Dr. Jeanine Abrams is a biologist at the Centers for Disease Control and Prevention. One of Abrams’s brothers, Richard Abrams, is a social worker, and her second brother inspires Abrams’s civic activism, as he struggles with addiction and bipolar disorder.

Abrams completed her undergraduate education at Spelman College, receiving degrees in Political Science, Economics, and Sociology. Throughout her Spelman College years, Stacy Abrams worked at the office of Maynard Jackson, a former mayor of Atlanta, Georgia, focusing her skills toward the youth services department. Even though she started in a mere office within Atlanta’s mayoral complex, Abrams’s civic work began well before her college graduation, allowing her to connect with people on every walk of life. She moved on as a Harry S. Truman Scholar, acquiring a Master of Public Affairs from the University of Texas at Austin. Later, she earned a Juris Doctor degree from Yale Law School. Immediately after graduating from Yale Law School, in 1999, Stacy Abrams was hired for the law firm Sutherland as a tax attorney, honing her craft to aid tax-exempt organizations and public finance. Just a short three years later, in 2002, Abrams was promoted to represent Atlanta as the Deputy City Attorney. While Abrams has branched into and flourished in political activism, her roots rest in the law, where she has a knowledgeable background in a system of frequent corruption and injustice.

Stacy Abrams’s political presence truly began in 2006, when she won the campaign to represent the 89th district for the Georgian House of Representatives. Winning 51% of the vote, Abrams proved that she was drawing out new voters who were able to change the political face of Georgia. Abrams won the Georgian representative position consecutively for almost 10 years, becoming the minority leader in 2010. Throughout this decade (2006-2016), Stacy Abrams protected the Georgian HOPE Scholarship, which gives financial aid to low-income citizens, promoted Georgia’s public transportation, and saved the state from its largest ever potential tax increase. In 2014, Stacy Abrams founded the New Georgia Project, a nonpartisan organization dedicated to registering and engaging potential Georgian voters, especially those from underrepresented groups, in political action particularly during elections. In the years 2014 to 2016, the project successfully accounted for more than 200,000 registrations for voters of color, encouraging diversity within a voter pool and allowing for a more democratic government. 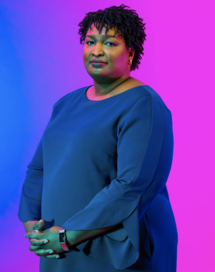 After resigning as the 89th district representative for the Georgian House of Representatives, Stacey Abrams ran for governor and made history as the first black woman to be a primary party’s nominee for any state governor in the United States. Despite backings from both Barack Obama and Bernie Sanders, Abrams lost to Republican nominee, Brian Kemp. However, this small setback did not extinguish her spirit. The Georgian election of Abrams vs. Kemp illuminated the corruption in the voting process—a vote analysis revealed that Kemp had supposedly eliminated hundreds of thousands of votes. In 2017, approximately 670,000 votes were declared invalid, with 70% of those cancelled ballots coming from black voters. Georgia’s black population only claims 32% out of the total population. In light of this severe voter suppression, Stacey Abrams founded Fair Fight (est. 2018), an enterprise to train voter protection squads in order to guarantee that each voter’s voice is heard and accounted for during an election. By instilling confidence in young voters of color via the Fair Fight teams, Abrams has been able to uncover the true voice of Georgia, which is a young one, eager for change. Between Fair Fight and the New Georgia Project, Stacey Abrams was able to register 800,000 new voters in the state of Georgia.

In addition to launching voter engagement organizations, Stacey Abrams founded the Southern Economic Advancement Project, an organization that promotes economic equality and opportunity across southern states. Another one of her economically orientated foundations is the NOW Account, of which she is the co-founder. The NOW Account offers financial services to small businesses, which helps in creating many jobs throughout Georgia. She also initiated the Fair Count in 2019, which works to verify the 2020 Census to increase involvement in civic engagement.

As a member of both the Council of Foreign Relations and the Subcommittee of Diversity, Stacey Abrams has discussed international policy with Australia, Austria, Belgium, Bulgaria, Canada, France, Israel, Italy, the Netherlands, South Korea, Switzerland, Taiwan, and the United Kingdom. Her work towards a more just society reaches far beyond the borders of Georgia, and even outside of the United States.

Throughout her career, Stacey Abrams has been recognized by Atlanta Woman magazine as one of its “25 Power Women to Watch,” in addition to Georgia Trend’s “40 Under 40,” Atlanta Business Chronicle’s “Top 50 Under 40,” and Ebony’s “30 Leaders of the Future.” It is evident that Stacey Abrams has always risen above her peers as a formidable political and economic presence, representing those overshadowed by an unjust government and fighting for an equal financial atmosphere.

Why Did I Choose to Research Stacey Abrams?

I chose to research Stacey Abrams because, in light of the current political climate, I wanted to learn more about the woman who turned the tide of the 2020 presidential election. Without her political and civic activism, Georgia would be a vastly different state, not represented truthfully during elections. She transformed the demographic representation of Georgia from one that blatantly quieted voices of change, to one that reflected young voices of activism against inequality. Without Stacey Abrams, the Georgian reputation would continue to reflect old ideologies that have failed to grow with the population.