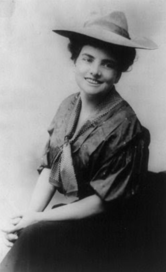 Harriet Adams was born in Stockton, California, on October 22nd, 1875, and she inherited her adventurous streak from both parents. Her father's family had emigrated from Scotland to Canada. As a young man, her father, Alexander Chalmers, traveled to the Pacific Coast in 1864 "in search of fortune and adventure," as he remarked in 1914. He originally settled in Coloma, California with his older brother, Robert, and sought fortune as a miner on the American River. Alexander abandoned the river in 1868 and opened a dry goods store in Stockton with his other brother, George. Frances Wilkins, Harriet's mother, was a descendant from seventeenth-century colonists who helped settle what is now New Hampshire. Frances’s father, Charles Wilkins, migrated overland to California during the Gold Rush. Unsuccessful as a miner, he began supplying the mining camps, instead, and settled his family in Piedmont, California. Alexander and Charles most likely met when they were both dry goods merchants, but it is not clear. They had two children, Anna and Harriet, and settled in Stockton, moving to Piedmont in their later years (1995).

Adams spent most of her childhood at her father's company, while her sister was tutored in the “ladylike social graces” expected of women of her time. At age eight, Adams and her father traveled on horseback throughout California and the Sierra Nevada. When she was fourteen, they journeyed to Oregon, and from there, to Mexico before returning to Stockton.

Adams’s formal education lasted only until age eleven, and from that point on, consisted of exploration with her father, voracious reading, and lessons with private tutors. During this period under her father's tutelage, she developed her powers of observation and a systematic thoroughness that later garnered the respect of other geographers and explorers. Adams possessed an affinity for language and was fluent in Spanish and French, as well as conversant in Portuguese, Italian, and German.

In 1899, Harriet married Franklin Pierce Adams at the age of 24, as she found in him a lifelong friend, companion, and partner. Frank was employed as an electrician for the Stockton Gas and Electric Company, where his brother and father also worked. Like Harriet, Frank loved to travel, and rather than buy a home, the couple lived in a boarding house so that they could save money for traveling. The Adams traveled throughout California in the early years of their marriage.

In the early 1900s, there was little information available for planning a South American adventure. There was no air travel and most trains didn’t cross international borders. Cars were not common. The road infrastructure was rough. To cover 40,000 miles in three years, Adams and her husband would have averaged 37 miles a day on horseback. According to the New York Times, Adams was likely the first white woman to meet 20 indigenous tribes on the continent. Considering European colonialists had been in South America for nearly 400 years by that time, this indicates just how far off the beaten track she ventured. More importantly, these encounters encouraged Adams’s reverent and politically progressive philosophy, especially concerning the women of the tribes. 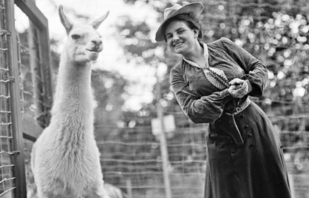 When the couple returned stateside, they settled in Washington, D.C. Adams trucked over to the National Geographic Society to pitch a few stories. What sealed the deal wasn’t just her writing, which was strong, but that she was also a skilled photographer who returned home with an array of color photographs. She had the foresight to record several movies of her adventures. In addition, Adams had charisma and a knack for telling stories that held the rapt attention of hundreds of people. She became one of the most popular adventurers and geography lecturers of the time by speaking with intelligence, authenticity, and humor. She went on to write for Harper’s Bazaar and other prestigious magazines, but she remained National Geographic’s secret weapon. For the publication’s first 50 years, Adams was its most prolific female contributor and lecturer.

After her first South American trip, she became engrossed by the colonial exploits of the Spanish and Portuguese empires. She followed Christopher Columbus’s path across the West Indies and retraced routes of Spanish conquistadors through the Caribbean to South and Central America. Later, she followed Ferdinand Magellan’s sailing route from Spain to the Philippines, where she deepened her anthropological studies of human migration. She toured North Africa, Turkey, and Western Europe, eventually settling in the South of France with her husband. In Asia, she also visited Siberia, the Gobi Desert, and Sumatra.

The New York Times and National Geographic considered her one of the most important adventurers of the time. She was admitted to Britain’s Royal Geographical Society in 1913, but was not allowed to join its American counterpart, the Explorers Club, because she was a woman.

For more than 25 years, the Harriet Chalmers Adams Society has labored to spread the word of the adventurous woman who grew up in Stockton, traveled the world, wrote for National Geographic Magazine, and was the first woman allowed to report from the front-line trenches of World War I, among other accomplishments. 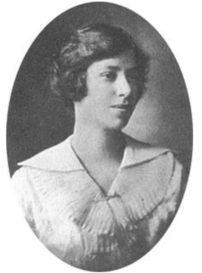 Harriet Chalmers Adams died in Nice, France, in 1937, at the age of 61. She was an insatiable traveler whose writing, photos, and lectures encouraged people to explore their own curiosity.

Gender constraints made the achievements of women explorers more extraordinary, in many ways, than their male counterparts. While their feats equaled those of men in magnitude, difficulty, and advancement of knowledge, female explorers were able to accomplish these feats despite gendered constructs that aimed to limit their success. Their accomplishments not only enriched our knowledge of other places and peoples but also affected social change at a variety of scales.

The question that remains is why a woman of such extraordinary talent and influence does not appear in the history of geography and exploration. It is possible that Adams’s lack of formal education and professional training diminished her credibility, and the absence of book-length publications decreased her sense of permanence.

Perhaps the most important lesson from Adams’s life is the suddenness with which her fame vanished after her death. Adams challenged gender-role stereotypes from within a field that was considered a masculine domain. There was nothing in her personality to condemn her, no excuse that justified ignoring her, and, during her lifetime, her work was acclaimed important by her peers, both male and female. Through her experiences, Adams proved that women could excel and lead fields that are male dominated with grace.

Why Did I Choose to Research Harriet Chalmers Adams?

Adams is anything but a household name, and little has been done to honor her contributions. Her story isn’t even taught in schools. I chose to write about Harriet Chalmers to inspire many young women to strive to do what they believe in, regardless of societal expectations, and expose her accomplishments to the iFeminist audience.