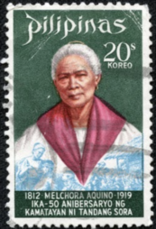 Tandang Sora is rarely referred to by her birth name, Melchora Aquino. Instead, she is called Tandang Sora, a moniker she received from Filipino soldiers during her time as a Filipina revolutionary. Tandang means “old,” since Aquino was 84 years old when the revolution started. Sora is a shortened version of Melchora, which, in Tagalog, is pronounced “Melsora.” Though widely recognized throughout the Philippines as a national hero, Aquino’s strength isn’t well known throughout the world.

Melchora Aquino never had a formal education of her own due to a lack of money. However, she was highly literate and incredibly intelligent at a young age. She was also a Mass singer with a beautiful voice. Besides her intelligence and voice, Aquino was also known throughout her village for her beauty. She was even chosen to represent Reyna Elena during Santacruzan. Santacruzan is a religious ritual that takes place during the last days of the Flores de Mayo (Flowers of May) feasts to honor Queen Helena of Constantinople. Aquino represented Reyna Elena (Queen Helena) on these days, walking around and reciting prayers in honor of the Blessed Virgin. Besides these details, not much else is known about Aquino’s childhood. 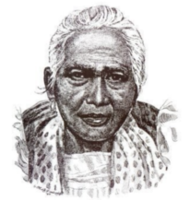 As an adult, Aquino enjoyed life as a farmer, like many other Filipinos at the time. She married Fulgencio Ramos, a barrio captain, and together they had six children. However, Ramos died early and Aquino inherited his farm and other business ventures. With a large family to take care of, Aquino worked very hard at the farm in order to raise her children to adulthood with proper schooling, something she never had. Aquino ran a successful store as well, though it is unknown if she built it herself or inherited it from her husband.

By the time the Philippine revolution rolled around in the late 19th century, Melchora Aquino was a successful businesswoman with a large farm and nice store. While she wasn’t considered “rich,” she wasn’t poor either, which made her a perfect candidate to help fund the Filipino side of the revolution against the Spaniards. Aquino became involved with a secret revolutionary society known as the Katipunan, which is the shortened version of their entire name: Kataastaasan Kagalanggalangang Katipunan Ng Mga Anak Ng Bayan (Highest and Most Respected Association of the Sons of the Country). Founded by Andres Bonifacio, the goal of the Katipunan was to unify the Philippines under one nation and liberate it from years of Spanish colonization. Aquino heavily supported the revolution, and by the time she became involved at age 84, the secret association was 100,000 people strong. 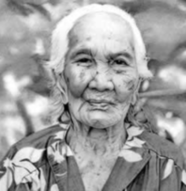 It was during this time that Tandang Sora (Old Woman Melchora) was born. Tandang Sora was the least likely suspect for the Spaniards because of her old age and harmless appearance. They couldn’t be more wrong, however, because Sora’s shop became an area for soldiers to restock their supplies and weapons, in addition to holding important and secretive meetings. Sora also provided much needed medical care through her skill in medicine and her prayers.

Unfortunately, in August of 1896, Sora’s home was invaded during an important meeting with the Katipunan due to a spy in the Filipino ranks. Sora and her family managed to escape to a nearby town, but it wasn’t long before the Spanish police caught her. Though Sora was technically not a member of the association, she often attended their meetings since they were housed on her property, meaning she was privy to all the sensitive information and secrets that the Katipunan held: their members, meeting areas, future plans, and how it operated. She was sent to prison, where she was fiercely interrogated. Sora said nothing. As punishment, the Spaniards sent Sora to Guam.

Tandang Sora returned to the Philippines a national hero after the United States took control of the Philippines from Spain. Her legacy lives on through her family, who lives mostly in Quezon City. In Quezon, there is a district and a road named after her. You can also find an image of her on a 100 peso bill.

Why Did I Choose to Research Melchora Aquino?

I am Filipino, and thought that researching famous pinay women would be a great experience for me to get in touch with my culture and heritage. I really admire Melchora Aquino/Tandang Sora for her bravery, even in her old age. She was fiercely proud of her country and protective of its people. Her courage is something that characterizes her, and I am glad that she is recognized today as a national hero.