Margaret Hamilton was born as Margaret Heafield on August 17, 1936, in Paoli, Indiana. She was the oldest of three children to Kenneth and Ruth Heafield. She graduated from Hancock High School located in Hancock, Michigan in 1954. After graduation, Hamilton attended the University of Michigan before transferring to Earlham College in Indiana. In 1958, Hamilton graduated from college with a bachelor's degree in mathematics and a minor in philosophy.

Magaret Hamilton married James Hamilton, her college boyfriend, after graduating college and settled in Boston while her husband finished his law degree at Harvard Law school. The couple raised one daughter, Lauren, before they divorced in 1967. 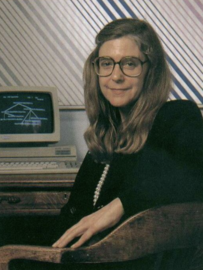 While in Boston, Hamilton worked as a high school mathematics and French teacher to support her family. She planned to attend Brandeis University in Massachusetts to earn her graduate degree in mathematics after her husband graduated. However, in 1959, Hamilton got a job at the meteorology department at the Massachusetts Institute of Technology (MIT). There, she helped develop LGP-30 (Librascope General Purpose), a computer software system used to model weather patterns. At the time, computer software and engineering were fairly new disciplines so many programmers had to learn from trial and error. Hamilton taught herself how to program computers, which was unusual for a woman at the time.

Additionally, Hamilton worked on the Semi-Automatic Ground Environment (SAGE) project during the Cold War era. SAGE was a revolutionary nationwide air defense system created to impede potential airborne attacks from the Soviets. She worked at the MIT Lincoln Labs, where she spent her time developing a computer system that would detect any possible planes that would attack the United States. Hamilton recalls that when she first joined the project, she was assigned work that no one was able to figure out. But eventually, she figured it out and was the first one to get it to run. Her efforts on this project landed her a spot on the Apollo program, the team that would send the first humans to the moon.

In 1963, Hamilton joined the MIT team that would develop software and computer systems for the Apollo program. Her hard work led her to become the director of the Software Engineering Division, leading a team of more than 100 engineers, mathematicians, and programmers. 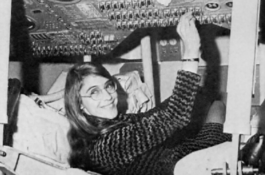 Hamilton’s team was responsible for writing the software code to run the Apollo program’s navigation and control of the spacecraft. Since the software was still in early development, her team had no rules or list of guidelines to follow when working. They had to face problems and solutions that they had never encountered before. Hamilton’s team worked tirelessly and tested every software rigorously, and, as she noted, “There was no second chance. We all knew that.”

On July 20, 1969, just minutes before the moon landing, mission control started to receive messages of errors from the spacecraft’s computer because the computer system was overloaded with instructions. This sudden malfunction started a discussion as to whether the moon landing should be called off. However, Hamilton and her team had programmed an error-recognition system that forced the computer to prioritize essential tasks when it was given too many tasks at once. “It got rid of the lesser priority jobs and kept the higher priority jobs, which included the landing functions,” Hamilton explained. The flight controllers at mission control, having knowledge of Hamilton’s software, trusted the work done by Hamilton’s team and instructed the astronauts to continue with the moon landing. Minutes later, the moon landing of astronaut Neil Armstrong and Buzz Aldrin took place. Without Hamilton and her team at MIT’s efforts, the historic moon landing would never have taken place. Hamilton’s software was so well made that NASA continued its use in the Skylab, the Space Shuttle, and the first digital fly-by-wire systems in aircraft. 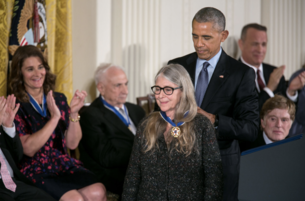 Hamilton continued to work for the Apollo program until the 1970s. Despite her contribution to the Apollo program, Hamilton’s pioneering role gained little recognition. However, in 1986, Hamilton received the Augusta Ada Lovelace Award from the Association of Women in Computing, one of the many awards soon to come. NASA also gave special recognition and honored Hamilton in 2003; they awarded her with the NASA Exceptional Space Act Award for her contribution to the Apollo program as well as to the discipline of software engineering. In 2016, Hamilton was awarded the Presidential Medal of Freedom by former President Barack Obama, the highest civilian honor in the United States.

After leaving NASA, Hamilton founded and led many software companies, including Hamilton Technologies, Inc. established in 1986. Her company, based in Cambridge, Massachusetts, had a goal to “provide technology, products and services to modernize systems engineering and software development through innovation.”

Margaret Hamilton was a pioneer in the fields of computer science and software engineering, opening the doors for women in STEM in a time where women’s presence in the workplace was not valued. She proved that women are capable of developing and innovating groundbreaking technology.

Why Did I Choose to Research Margaret Hamilton?

I chose to research Margaret Hamilton because she is a pioneer in software engineering and a woman who was able to succeed in the fields of STEM during an age where women were seen as not capable. As a young girl interested and wanting to pursue a future in a field of STEM, I am thankful for women like Margaret Hamilton who open the doors for me and my peers.

‌George, A. (2019, March 14). Margaret Hamilton led the NASA software team that landed astronauts on the moon. Retrieved from https://www.smithsonianmag.com/smithsonian-institution/margaret-hamilton-led-nasa-software-team-landed-astronauts-moon-180971575/

‌Jackson, L. (2016, November 22). [President Barack Obama presents the Presidential Medal of Freedom to Margaret H. Hamilton during a ceremony in the East Room of the White House]. Retrieved from https://obamawhitehouse.archives.gov/blog/2016/11/22/celebrating-presidential-medal-freedom-winners-science-and-tech-garwin-hopper-and