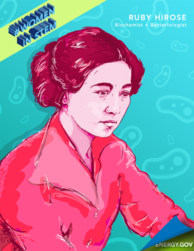 Ruby Hirose is a biochemist whose name is rarely mentioned in history books. Her research propelled the development of a vaccine for infantile paralysis, also known as polio, and advanced treatment for other diseases.

Hirose was born on August 30th, 1904, in the United States. Her parents, Shusaku and Tome Hirose, emigrated from Japan to the United States after their business did not thrive in Japan. Hirose’s parents were first-generation Japanese immigrants, also known as the Issei Generation. Since her parents were in the Issei Generation, Hirose is considered a part of the Nisei Generation because she is the daughter of Japanese immigrants and was born in the states in the early 1900s. She was the oldest of three siblings and one of the first Japanese-American students at her primary school. Hirose graduated from Auburn High School in Washington in 1922. Throughout her academic career, she faced discrimination for her identity as a Japanese American. Hirose and her sister were both born in the United States, but they were registered as Japanese nationals.

After high school, Hirose went to the University of Washington to pursue a bachelor’s degree in pharmacology. During her time there, she participated in a survey about race relations with Stanford University. Her participation included an interview in which she described the hardships that her family had faced as well as her identity as a Japanese American woman. After graduating with her bachelor’s degree in 1926, Hirose obtained her master’s degree in pharmacology in 1928 and a doctoral degree at the University of Cincinnati in 1932. Her first thesis titled, “Nature of Thrombin and Its Manner of Action” (1932) is centered around the Thrombin enzyme. Following this thesis was her second one, titled, “The Second Phase of Thrombin Action: Fibrin Resolution” (1934).

At the University of Cincinnati, Hirose conducted research focused on biochemistry, bacteriology, and cellular/molecular biology. After graduating college, Hirose started working at the William S. Merrell Laboratories. During WWII, America created Japanese internment camps in order to isolate and control Japanese Americans after the bombing of Pearl Harbor. Her family was sent to one of these camps, but Hirose was able to avoid internment because she was living in Ohio during that time. Despite the fact that her family was facing intense discrimination and human rights abuses due to their ethnicity, she continued doing research at the laboratories. 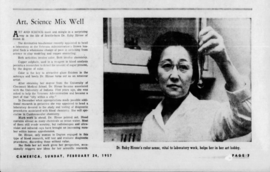 Hirose’s research included developing pollen extract treatments for hay fever and treating allergies through a diphtheria vaccine. While she worked on this research, she was diagnosed with hay fever herself. Hirose also wrote a paper about a plant called Hydrastis canadensis, also known as “goldenseal.” This plant was used to treat eye inflammation, and her study, “A Pharmaceutical Study of Hydrastis Canadensis,” highlighted its significance and how to obtain it. Hirose’s later contributions to the polio vaccine included research on serums and antitoxins. The vaccine she helped develop for polio was an oral procedure, which allowed droplets to be put into the mouth of the patient. Hirose’s work contributed to the vaccine that later became widely used throughout the United States and in other countries. Her work on the polio vaccine and other research was recognized by the American Chemical Society. She was one of the ten women who were recognized for their work by the Society and was invited to a convention of 300 people.

In 1958, Hirose moved to Lebanon, Pennsylvania, to work at a Veterans hospital as a bacteriologist. She continued to conduct important research and work until her death on October 7th, 1960, at the age of 56. Ruby Hirose left behind a legacy of research and innovation that has not gotten the recognition it deserves.

Why Did I Choose to Research Ruby Hirose?

When I was in my history class, I did not know about the many female scientists who contributed to different advancements in history. Ruby Hirose is a name that I never heard about until I found an Instagram post about her. I read about how she contributed to infantile paralysis and knew that I wanted to learn more about her life and contributions.