While Ahilya did not come from a royal lineage, most deem her entry into history a twist of fate. It dates back to when the acclaimed Lord of the Malwa territory, Malhar Rao Holkar, spotted an eight-year-old Holkar at the temple service feeding the hungry and poor on his stop in Chaundi while travelling to Pune.

Moved by the young girl’s charity and strength of character, he decided to ask her hand in marriage for his son Khanderao Holkar. She was married to Khanderao Holkar in 1733 at the tender age of 8. But distress was quick to befall the young bride when her husband Khanderao was killed in the battle of Kumbher in 1754, leaving her a widow at only 29. 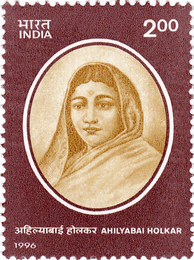 Holkar planned to commit Sati (a historical practice in which a widow sacrifices herself by sitting atop her deceased husband's funeral pyre), but her father-in-law Malhar Rao refused to let it happen. He had been her strongest pillar of support at the time. But a young Holkar would see her kingdom fall like a pack of cards after her father-in-law passed away in 1766, only 12 years after the death of his son Khanderao.

Mahal Rao’s death led to his grandson and Holkar’s only son Male Rao Holkar ascending the throne under her regency.

However, the young monarch Male Rao died as well a few months into his rule on April 5th, 1767, thus creating a vacuum in the power structure of the kingdom. One can imagine how a woman, royalty or not, would suffer after losing her husband, father-in-law, and only son. But, Holkar stood undeterred. She did not let the grief of her loss affect the administration of the kingdom and the lives of her people. While there was indeed a section of the kingdom that objected to her assuming the throne, her army of Holkars stood by her and supported their queen’s leadership. Just a year into her rule, one saw the brave Holkar queen protect her kingdom—fighting off invaders tooth and nail from plundering Malwa. Armed with swords and weapons, she led armies into the battlefield. There she was, the queen of Malwa, slaying her enemies and invaders on battlefronts with four bows and quivers of arrows fitted to the corners of the howdah of her favourite elephant. Her confidante on military matters was Subhedar Tukojirao Holkar (also Malhar Rao’s adopted son), whom she appointed the head of the military.

Her observation of the British and their agenda was something even the Maratha Peshwa, the appointed Prime Minister of the Maratha Empire of the Indian subcontinent had missed noticing. In a letter written to the Peshwa in 1772, she threw caution to the wind and said: “Other beasts, like tigers, can be killed by might or contrivance, but to kill a bear it is very difficult. It will die only if you kill it straight in the face, or else, once caught in its powerful hold; the bear will kill its prey by tickling. Such is the way of the English. And given this, it is difficult to triumph over them.” Holkar is famous for having built numerous forts and roads in Malwa region, sponsoring festivals and offering donations to many Hindu temples. Her philanthropy reflected in the construction of a number of temples, ghats, wells, tanks and rest-houses stretching across the length of the country. Her kingdom’s capital, Maheshwar, was a melting pot for music and culture, and she is known to have opened doors to stalwarts like the Marathi poets Moropant, Shahir Anantaphandi, and Sanskrit scholar, Khushali Ram. The capital was also known for its distinct craftsmen, sculptors, and artists who were paid handsomely for their work. The queen also established a textile industry in the city. Through public audiences held daily in her court, Holkar addressed the grievances of her people and always became available to anyone who needed her guidance. 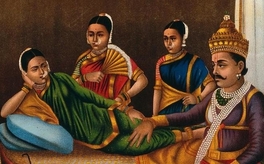 Historians have noted how she encouraged all within her kingdom’s boundaries to do their best at whatever they took on. “Far and wide the roads were planted with shady trees, and wells were made, and rest-houses for travellers. The poor, the homeless, the orphaned were all helped according to their needs. The Bhils, who had long been the torment of all caravans, were routed from their mountain fastnesses and persuaded to settle down as honest farmers. Hindu and Musalman alike revered the famous Queen and prayed for her long life,” writes Annie Besant. Holkar was a woman ahead of her time, but her greatest regret remained her daughter performing Sati upon the death of her husband, Yashwantrao Phanse. The queen died at the age of 70 after a 30-year rule and was succeeded by her commander-in-chief, Tukoji Rao Holkar I. Centuries later, Holkar’s legacy lives on in the form of the numerous temples, dharamshalas, and the large amount of social work she dedicated her life to. A commemorative stamp was issued in her honour on August 25, 1996, by the Indian government. As a tribute to the ruler, Indore’s domestic airport has been named Devi Ahilyabai Holkar Airport. The Indore university too was renamed Devi Ahilya Vishwavidyalaya.

Devi Ahilyabai Holkar is a name largely unknown to most Indians, let alone to global history compilations. August 13th, 2020 marks the 225th death anniversary of Holkar. She ruled the province of Malwa for 28 years before she died, and created a strong local administration, overcoming the 18th-century disadvantage of gender. Taking over as the Queen of Malwa after all the male claimants to the throne had died, she stands out as a strong ruler spreading the message of dharma, rejuvenating Hinduism, and promoting the relatively modern virtues of small-scale industrialisation.

Historians write how she encouraged all within her realm and her kingdom to do their best. During her reign, the merchants produced their most elegant clothes and trade flourished to no end. No more was the farmer a mere victim of oppression but a self-sufficient man in his own right.

Why Did I Choose to Research Devi Ahilyabai Holkar?

I was inspired to research about this great ruler of my city to quench my thirst for finding women's contributions that made Indore what it is today: a modern hub for art, sciences and economic advancements. I can say without a doubt that participating in this research was by far the most rewarding experience of my entire high school career for it allowed me to look past the conventional sources of media and helped me gain a great sense of pride and motivation.