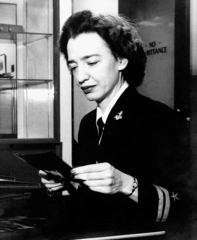 Grace Brewster Murray Hopper was born on December 9th, 1906 in New York City and passed away on January 1st, 1992 in Arlington, Virginia.

Grace Hopper was one of very few individuals during her time to get her Ph.D in not just one, but two fields: mathematics and physics. Grace Hopper was a phenomenal woman known for being an American mathematician, designing 3 Mark computers at Harvard University and a rear admiral in the NS Navy during World War II. As a Navy admiral, she played a significant role in developing computer technology and creating applications and devices for naval use.

Grace Hopper was the oldest child in her family and had two younger siblings. Grace was always known to be curious. When she was seven years old, she wanted to understand how an alarm clock worked. She had her parents buy her a number of alarm clocks and she would take them apart and try to figure out what made it tick. 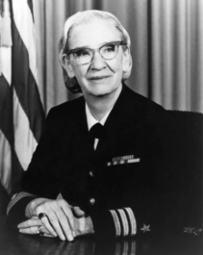 Grace Murray attended Vassar College in Poughkeepsie, New York, where she studied and received a bachelor’s in mathematics and physics. Grace applied to Vassar College twice: the first time she applied she was 16 years old but was unable to attend because her Latin language score was too low. After long study sessions and the devoted time, she was able to bring her score up and was admitted one year later. After receiving her degree in 1926, Grace moved forward and completed a master’s degree in 1930 at Yale University. Grace then headed back to Vassar College to become a professor in math while also completing a Ph.D. in Mathematics at Yale. In 1934, she was recognized as one of only a few women who completed a Ph.D.

While attending Vassar College, Grace met Vincent Foster Hopper who was a professor at New York University. They married in 1930 and later divorced in 1945. Although they were divorced, Grace kept the last name Hopper and never remarried.

Grace continued teaching at Vassar until 1939, the start of World War II. Grace came from a long line of military traditionalists. If we trace her family tree, we can see that she had family members who served in the American Revolutionary War. During World War II she felt an overwhelming and compelling urge to join and fight for her country. In 1943, she joined the Navy WAVES (Women Accepted for Volunteer Emergency Service) program and took her position at a US Naval Reserve. To be in the Navy, one needed to have a minimum weight of 120 pounds. Although Grace did not meet this requirement, she received an exemption to enlist due to her education. Thanks to her Ph.D. in mathematics, Grace’s rank increased in the Navy, and by June of 1944, she was a lieutenant. During her time as a lieutenant, she took on an assignment at Harvard; the Bureau of Ordinance Computation Project; where she learned how to code and programmed the Mark I computer. The Mark I was an automatic calculator and the mother of all electronic computers. 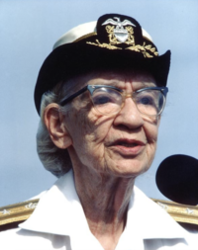 Grace received a fellowship at Harvard where she designed the Mark II and Mark III computers. In 1949, Grace designed an upgraded compiler that translated instructions into code for the computer to understand while in the Eckert Mauchly Computer Corporation. After the project was taken over by Remington Rand and Sperry Rand Corporation, Grace continued to work, and in 1957, her division created the first English language data processing compiler called Flow Matic. Flow Matic was the first English-like data processing language. This was the foundation of all English-based programming languages we are familiar with today. (i.e. C, C++, and Java) At the same time, Grace was ranking up in the Navy, and by 1966 she was a commander. She also retired but was called back into service because of the need to standardize their computer languages. In 1986, Grace officially retired from the Navy, being recognized as one of the oldest individuals to be active duty at 79 years old.

Following her years as a navy soldier, Grace became an elected fellow of the Institute of Electrical and Electronics Engineers. Grace was also named the first computer science Man of the Year by the Data Processing Management Association in 1969. Grace was awarded the National Medal of Technology in 1991 and the Presidential Medal of Freedom in 2016 by former President Barack Obama. Grace Hopper was a phenomenal woman who succeeded in multiple male-dominated fields.

Why Did I Choose to Research Grace Hopper?

I chose to write about Grace Hopper because she was an amazing woman who went above and beyond what was expected of her. She went and received two Phds, taught at an ivy league university and took part in serving our country.