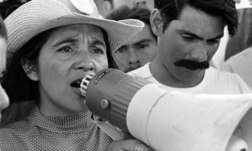 Civil rights activist Dolores Huerta was born on April 10th, 1930, in the mountains of New Mexico. In the small northern mining town of Dawson, Huerta’s father Juan Fernandez was a farm worker and coal miner while her mother Alicia Fernandez tended to her three children. Although Huerta’s father became a union activist and political official within the New Mexico legislature in 1938, Huerta claims that this was not the cause of her political ingenuity and drive for change. When her parents divorced, Huerta was only three years old, causing her, her mother and two brothers to move to Stockton, California, when she was only a toddler. According to Huerta, her activist spirit did not come from her politician father, but rather her hard-working, single mother. 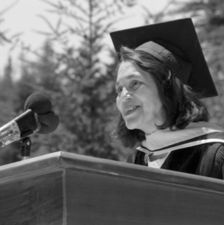 “Women also set their standards for the family. If women are involved politically and in civic life, then the children and the family are going to be involved also,” Huerta stated in a documentary about her life titled Dolores. As the middle child of three Latin American siblings, Huerta soon realized the reality of her family's condition; even though her mother struggled to provide for her children while holding two jobs, Alica Fernandez’s determination allowed her to buy a small hotel and create her own restaurant. Despite being consumed running her restaurant, Huerta’s mother still showed her daughter the importance of empathy and compassion. In her 70 room hotel, Huerta’s mother offered affordable rates to low-wage labor workers after seeing their lack of fair wages and rest periods. As a teenager living in the rural parts of California, Huerta slowly became aware of the social injustices that affected Latin American citizens each day. At Stockton High School, Huerta faced racial discrimination when one of her teachers accused her of cheating because her papers were “too well-written” for a Hispanic, and again when local white police officers beat one of her brothers for dressing in an ethnic Latino suit.

Through these experiences, Huerta learned from an early age that she wanted to put a stop to these social injustices. Later, Huerta asserted that “we are not taught about the contributions of people of color building the United States of America. We have to include these in our schools – starting in pre-K, kindergarten – what the contributions are of the people of color...As long as that isn’t taught in our school books, our children of color will never have the dignity that they deserve, they will always feel like second-class citizens.” 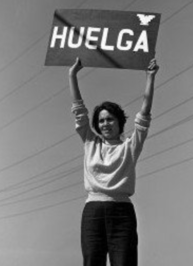 After graduating from the Delta College of the University of the Pacfic with a teaching degree, Dolores Huerta began advocating for change by creating the Stockton Chapter of the Community Service Organization, which fought for economic improvements for the Hispanic community through legislation. It is likely Huerta pursued a teaching degree as a result of the negative experiences she had as a child in a discriminatory school system, which she wanted to change. In addition, along with the famous Cesar Chavez, Huerta founded the National Farm Workers Association (NFWA). The NFWA is the seed organization of the more well-known United Farm Workers’ Union, an organization in which Huerta served as President until 1999. It is noted by many feminists that Huerta’s work is often overshadowed by Chavez’s, such as coining the phrase “Sí se puede,” or, “Yes we can” in Spanish during an Arizona protest. It was the inspiration behind President Barack Obama’s 2008 campaign slogan which focused on social and economic change. 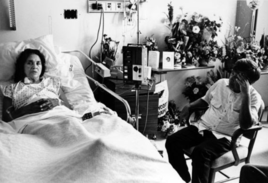 One of Huerta’s major activist moments came from the monumental Delano Grape “Huelga,” or “Strike,” of 1965, in which an estimated 17 million individuals stopped buying produce from non-union permitting grape farms in California’s Central Valley. Five thousand grape workers went on strike in order to raise awareness for labor worker union’s rights. "They didn't have toilets in the fields, they didn't have cold drinking water. They didn't have rest periods," Huerta explained during a personal interview. Huerta’s determination to fight off unfair working conditions in California lasted a total of five years, a strike which ended in 1970 after a union contract was finally signed to protect workers rights in Delano, California. This contract also served as a predecessor for the California Agricultural Labor Relations Act of 1975, a law permitting the formation of labor unions and overall better working conditions for farmers.

But not all was perfect in Huerta’s world, even after several of her accomplishments. During her school years, she married and divorced twice, while taking care of her 11 children. Within an interview about the documentary Dolores, Huerta admits how much she struggled with being both a civil rights advocate and a mother. “I think that's something that all mothers have to deal with, especially single mothers. We work and we have to leave the kids behind.” Knowing this struggle, critics used this part of Huerta’s life to bring down her movements."Who supports those kids when she's out on these adventures?” asked a bystander as Huerta stood on the front lines of a labor protest; This hurtful commentary was caught on live film of the protest. 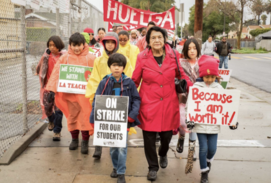 Around this time, Huerta was already in her mid 40s-50s which made her even more vulnerable to political hate during this time period, especially due to the immigration crisis that arose in America. For instance, while protesting George Bush’s presidential campaign policies that would hurt labor workers, a police officer broke four of Dolores Huerta’s ribs and shattered her spleen with a baton in an attempt to control the crowd. Huerta’s followers were horrified by this show of brutality, especially when it involved someone who advocated for non-violent, family-friendly protests. The public pushed the San Francisco Police Department to change its disciplinary policies when it came to handling protests, which thankfully allowed Dolores to recover from her injuries with even more motivation than before. Despite these types of attacks on her character, Dolores Huerta did not back down, and instead, turned the public’s criticism of her personal life into a reason to support feminism even more. 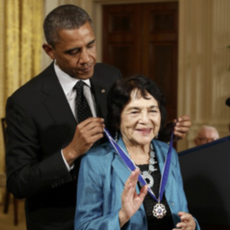 “Not all women are feminists, but feminists are people that care about immigrants and workers and the environment and labor rights, and of course reproductive rights, LGBT rights.” While traveleing throughout the United States for the Feminist Majority’s Feminization of Power: 50/50 organization for two years after her injuries, Dolores Huerta used her experience with peaceful social activist movements to help more Latinas gain political office in the United States government. Today, at 90 years old, she travels across the country engaging in campaigns and influencing legislation that supports equality and defends civil rights through the presidency of her own organization called the Dolores Huerta Foundation. “We need to have women in civic life and we need to have women involved. Because women have a different sensibility, a different intuition, a different way of thinking. We look at problems differently than the way men do. Active women have a tendency to think more of a resolution and cooperation than conflict and domination.”

Through her work to promote both labor worker and women’s rights, Huerta has been granted several awards such as the Eleanor Roosevelt Award for Human Rights (1998), Presidential Medal of Freedom (2012), Puffin/Nation Prize for Creative Citizenship (2002), and Community of Christ International Peace Award (2007), the most prestigious of them being the Presidential Medal of Freedom (2012), given to her by former President Barack Obama himself. “The freedom of association means that people can come together in organization to fight for solutions to the problems they confront in their communities... It is this right that sustains and nurtures our democracy today,” Huerta stated while receiving the award.

Dolores Huerta remains an immense figure within the labor workforce movement, women’s movement, and Latin American civil rights movement, and can be considered an immense role model for political activists today who wish to make social change regarding human rights.

As a Latina girl living in the United States, I have always wanted to feel more connected to my heritage and culture by learning about the successes of other Latin American women. Similar to my reasoning for writing the articles on Matilde Hidalgo and Dr. Helen Rodriguez-Trias also published on the iFeminist website, researching Dolores Huerta has given me a window to a world of possibilities for discovering similarities between myself and highly educated women who desire to make an impact on their community. On Long Island, where I am from, there is not a large Latin American community, which has led me on a journey to reach out to organizations with which I can relate to and grow from. However, it is not only personally rewarding to conduct research on individuals with a similar background as myself, but also extremely relevant within the harshly polarized political climate of the United States today. Activism—and peaceful protests—are just one form of expression and support for other civil rights movements such as the Black Lives Matter Movement, MeToo Movement, Dreamers Movement, and more. Social equality should exist in a democracy in all forms, which is why I strongly see the need to focus on Dolores Huerta’s mindset and works.

‌Philp, D. (2017, November 30). "Yes we can”: Dolores Huerta, architect of slogan, gets the spotlight in new film. The Guardian; The Guardian. http://www.theguardian.com/us-news/2017/nov/30/dolores-huerta-yes-we-can