Born on November 8, 1875, Qiu Jin was considered the perfect daughter—foot bound and proper. Qiu Jin was married off by her family to an uncultivated and tyrannical merchant in 1896. However, Jin would not accept this position in life. She grew up dreaming that her name would be in history books much like her martial heroine, Hua Mulan. After witnessing the horrors of the Boxer Rebellion (an anti-foreigner, anti-imperialist, and anti-Qing rebellion in 1899) and wanting to leave her husband, she pawned all her jewelry, left her two children, and moved to Japan. 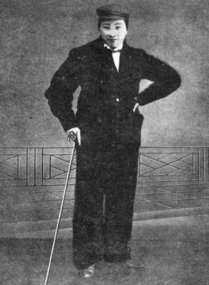 At that time, Japan was home to revolutionaries from China like herself, including Sun Yat-Sen. In Tokyo, Qiu Jin enrolled in Shimoda Utako’s Women’s Practical School and trained in archery and sword fencing at a martial arts academy. She continued to rupture Chinese standards for women by unbinding her feet and cross-dressing. During this time, her poems and prose were also found in Anti-Qing publications and journals. Qiu Jin was fed up with the weak Qing government and foreign occupation in China. She believed toppling the Qing dynasty was the only way for China to regain greatness. Jin, like other reform-minded women, also believed that women’s rights came hand in hand with political revolution. 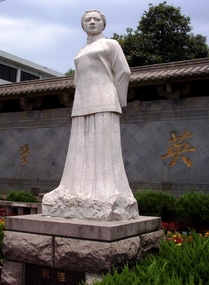 In Qiu Jin’s eyes, a woman’s place was not at home or in the kitchen, but on the front lines fighting for what they believe in. When she returned to China in 1906, Qiu Jin started Chinese Women’s Journal, China’s first feminist magazine. She appealed to women of all classes using vernacular (language of the common people) language and wrote about gender equality and the oppression of women through practices like arranged marriages and foot binding. She concluded that the solution to overthrowing these evils was a modern education and an independent income.

She opened the coeducation Datong Normal College in 1907 to teach subjects like English and military skills. Qiu Jin, dressed in men’s clothing and leather shoes and became an inspiration to her female students.

After her fellow revolutionary and co-conspirator, Xu Xilin, was caught and executed, the Qing troops were out to look for Qiu Jin. It wasn’t long before she was discovered by the Qing troops. Jin was determined to fight to the death for her cause. At the age of 31, Qiu Jin was publicly beheaded on July 15, 1907. Before she died, she wrote: “Autumn wind, autumn rain, fill my heart with sorrow.”

Her militant determinism and heroism made her a feminist martyr to the Qing dynasty revolution. Her transformation from a submissive wife to a true warrior of the revolution is an inspiration to all women.