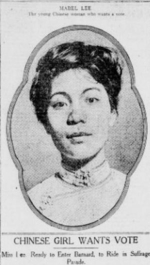 On May 4th, 1912, 16-year-old Mabel Ping-Hua was amongst the 10,000 people gathered for a women’s suffrage march in New York. However, she could not be seen in the midst of the crowd, nor the end, but at the very front where she and fellow suffragists, on horseback, led the march. And if her age and position do not intrigue you already, unlike the other marchers, Mabel Ping-Hua Lee was a Chinese immigrant.

Born in 1896 in Canton (now Guangzhou), China, Mabel Ping-Hua Lee’s life started out in China. Her mother was an ordinary citizen, but her father was a missionary and was able to move to the United States when Lee was four years old. Lee stayed with her mother and grandmother in China until the age of nine, when Lee won an academic scholarship, the Boxer Indemnity Scholarship, which presented her and her family the opportunity to relocate to America and study there. In 1905, Lee and her family joined her father in New York City’s Chinatown. There, she attended Erasmus Hall Academy.

Meanwhile, during the time Lee and her family moved to the United States, the Chinese Exclusion Act was in effect. This Act prohibited Chinese immigrants from becoming U.S. citizens and resulted in the loss of the right to vote. However, because of the Act, the negative perceptions of Chinese people, and her inability to vote, Mabel Ping-Hua Lee engaged in activism, advocated for women’s suffrage rights and equality, and continued to do so throughout her studies. 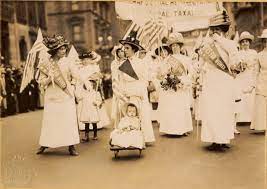 At the age of 16, Mabel Ping-Hua Lee led a women’s suffrage march of over 10,000 people with fellow suffragists. Lee was also accepted into Barnard College, where she joined the Chinese Students’ Association and wrote feminist essays for The Chinese Students’ Monthly, one of them being, “The Meaning of Women Suffrage,” which argued that a democracy ought to provide equal opportunities to women. In addition to women’s voting rights, Lee was also passionate about educating and employing equal rights for Chinese women. In 1915, Lee gave a speech titled, “The Submerged Half,” calling for girls’ education and women’s rights in China. Here, she states, “For no nation can ever make real and lasting progress in civilization unless its women are following close to its men if not actually abreast with them.” Then in 1917, she led another New York suffrage parade which mainly consisted of Chinese and Chinese American women.

With Mabel Ping-Hua Lee’s involvement in New York’s women's suffrage movement, women in New York finally won the right to vote in 1917. Then, in 1920, the 19th Amendment was ratified, allowing for progress towards women’s voting rights. Lee was still unable to vote, as the Chinese Exclusion Act was still in place. It was not until 1943, when the Act was abolished, that Lee could potentially become a U.S. citizen and vote.

After Lee’s four years at Barnard, she continued her education at Columbia University, where she earned her Ph.D. in Economics. She became the first-ever Chinese woman to earn her Ph.D. in the U.S. 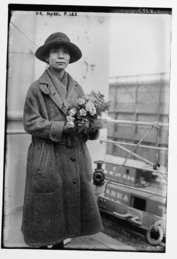 Throughout Lee’s life in America, she always hoped to return back to China to utilize what she learned in the suffrage movements to educate Chinese women, but unfortunately, due to her father’s passing in 1924, she let go of that dream and took over her father’s position as the director of the Chinese Baptist Church of New York City. After taking on her father’s role, she also founded the Chinese Christian Center. The Center provided English classes, a health clinic, and a kindergarten to help the Chinese community in New York. Mabel Ping-Hua Lee never married and devoted her life to activism and her Chinese community, passing away in 1966.

Dedicating her life to advocate for women’s voting rights and equality, even though she would not directly benefit from it at that time, Mabel Ping-Hua Lee’s work, legacy, and name are still remembered and practiced today. The Chinese Baptist Church that Lee worked at is still carrying out Lee’s mission and works to offer support to everyone in the community and attain their civil rights. Additionally, on December 3rd, 2018, the post office in New York City’s Chinatown was named Mabel Lee Memorial Post; every time you drop off a mail-in ballot, you are able to remember and honor her contributions.

It is unclear whether Mabel Ping-Hua Lee became a U.S. citizen and exercised her right to vote, but her activism, whether it be through her essays, speeches, or leading on horseback, she made it possible for women, generation after generation, to have the right to vote.

Why Did I Choose to Research Dr. Mabel Ping-Hua Lee?

I chose to research Mabel Ping-Hua Lee because I not only wanted to learn more about the history of women’s right to vote, but was interested in learning more about historical women figures of my ethnic background. While I was reading Mabel Ping-Hua Lee’s story, I was amazed at how selfless and passionate she was about helping others even when she knew she would not benefit from this. I admired how she did not let obstacles get in the way of her goals such as the Chinese Exclusion Act or not being able to return back to her homeland, but instead, utilized the challenges to better herself and her community. Lee also never forgot her roots, and with her determination along with activism, women are able to vote today.