Gisella Perl was born on December 10, 1907, to a Jewish family in Sighet, Transylvania (modern-day Romania). From a young age, she showed great academic promise, graduating high school at only sixteen years old and at the top of her class. In fact, she was the first woman and only Jew to graduate secondary school in Sighet. Perl later moved on to attend the University Medical School in Kolozsvar as the first female Jew. Due to her passion for science and exceptional work ethic, she graduated with merit. This was much to the dismay of her father, who believed that the practice of medicine would cause her to lose faith in her Jewish religion. Perl married a surgeon following her education in Kolozsvar, and with him she gave birth to two children, one son and one daughter. Perl became a very prominent gynecologist in her hometown, where she ran a well-known practice. 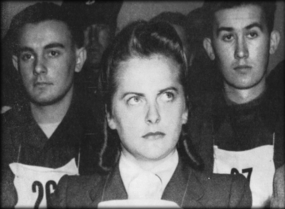 In 1944, the Nazi Germans invaded Transylvania, causing Perl and her entire family, excluding her daughter, to be deported to concentration camps. Her daughter, Gabriella, was left with what was known as a “Righteous Gentile” family: a family comprised of non-Jews that would risk their lives during the Holocaust to save their Jewish neighbors from the brutal concentration camps. The Perl family spent eight treacherous days confined in an overcrowded cattle car with no food or water. Upon her arrival at Auschwitz, one of the most cruel Nazi death camps during the Holocaust, Perl was separated from her husband and son, but promised that they would one day meet in Jerusalem together. Her son, however, was immediately gassed, and her husband was beaten to death in a fight shortly after liberation. Perl herself was kept alive, and forced to work as a doctor under the infamous Dr. Josef Mengele, who was known for his inhumane experiments performed on living people, specifically twins and pregnant women.

At first, Mengele instructed Perl to promote blood “donations” from other prisoners at the camp. Although called “donations,” these blood transfusions were forced and nonconsensual. Soon, Mengele found out that she was a gynecologist, and instructed her to report every pregnant woman to him. She was told that they would be sent to a camp that would better nurture the mothers and children by providing better food and even milk. Many women who overheard this conversation actually reported themselves as pregnant to Mengele in an attempt to escape the utter horror that was Auschwitz. However, these women were viciously experimented on, and eventually thrown into the crematorium. After gaining knowledge of this, Perl decided that there would, “never again be a pregnant woman in Auschwitz.”

While some women came to the camp impregnated, many conceived children in Auschwitz, where rape and molestation was prevalent. Women’s bodies were seen as mere objects, to the point where there were special barracks devoted to the SS Officers’ rape of Jewish women. In addition, sexual exchange for commodities necessary for survival was common at concentration camps, creating a very high risk for pregnancy. 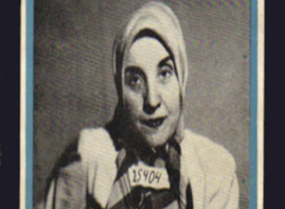 Despite the fact that abortions went against Gisella Perl’s professional and religious beliefs, she terminated innumerable pregnancies in order to save both mothers and children from certain death. Perl performed abortions wthout any proper equipment or anesthesia in the squalid barracks of the concentration camp in the middle of the night, with the hope that one day these mothers would escape and be able to bear children in the future. If the pregnancy was too far along to abort, she would puncture the amniotic sac, manually dilate the mother’s cervix, and induce labor. This caused the premature infants to lose their lives. Now that they were no longer bearing children, the women were able to continue their forced labor, rather than be immediately put to death. In addition to saving many women from death due to their pregnancies, Perl treated other injuries in the infirmary, such as women whose breasts were lacerated due to the cruelty of the Nazi SS officers. Without the amazing assistance of Gisella Perl, thousands of women and children would have passed away.

Shortly after the Jewish prisoners were liberated, Perl learned that her entire family had been killed as a result of the Holocaust. This knowledge, along with extreme guilt and trauma, pushed her to attempt suicide by poisoning herself in 1947. She fortunately was found before she died, and was brought to a monastery in France, where she soon recovered. Several months later, she moved to New York City.

It was in New York that Perl was accused of assisting Dr. Mengele, known as The Angel of Death, and subsequently interrogated. The testimonies of former inmates saved her, detailing that they would not have had a chance of survival without her medical knowledge and altruism. One year later, she wrote the book titled I Was a Doctor in Auschwitz. In addition to her published memoir, she participated in an interview with The New York Times, where she recounts her experiences in the death camp. 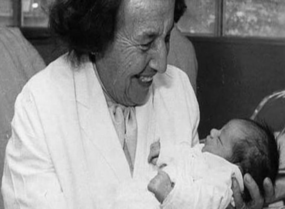 At the suggestion of Eleanor Roosevelt, Perl began practicing medicine again and was granted US Citizenship in 1951. She specialized in Infertility at Mount Sinai Hospital, and eventually opened her own practice on Park Avenue, where she delivered over 3,000 healthy babies. She recounts that every time a woman went into labor, she would pray, “God, you owe me a life-- a living baby.”

In 1979, Perl discovered that her daughter who was in hiding during the Holocaust survived, and was living in Israel. She moved there with her daughter and grandson until her death in 1988, fulfilling the promise to be reunited with her children.

Although her practices in Auschwitz were controversial, ultimately Gisella Perl is seen as “The Angel of Auschwitz,” having saved the lives of countless mothers.

Gisella Perl is an extremely admirable role model for all women, not only for her accomplishments in STEM, but for her character. She was able to overcome a heinous situation and use her talents to benefit the lives of others. It was her selflessness that spared lives and created hope for prisoners. Even after her work in Auschwitz, Perl continued to work hard, delivering thousands of healthy children. Gisella Perl is an incomparable woman in history, setting an example for all who aspire to continue her work in medicine.

Why Did I Choose to Research Gisella Perl?

As I discuss on the “Our Team” Page, I am very proud of my heritage as a Jewish woman in the United States. I have always been interested in research on the Holocaust, for I find it extremely important to educate others in order to ensure that a mass genocide will not happen again. In addition, I intend to go into STEM when I am older, so I researched Gisella Perl to highlight her accomplishments in this field while simultaneously detailing her story as a Jewish woman.

Tapalaga, A. (2020, January 30). The angel of Auschwitz: The doctor who saved thousands of lives in the Auschwitz concentration camp. Retrieved April 10, 2020, from https://medium.com