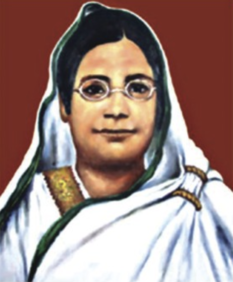 Rokeya Sakhawat Hossain, lovingly known as Begum Rokeya by her followers, was born on December 9th, 1880 in the Pariband village of Rangpur, Bangladesh during the time of British India. She was born to a well-educated Zamindar (land-owning) father who had a keen interest in education and multiple languages. Being a Zamindar at that time signified a privileged lifestyle. However, Muslim patriarchal norms lead Rokeya’s father to maintain a strict rule of the Islamic code of Pardah (veil) for all the women in his family. This resulted in Rokeya’s brothers receiving schooling opportunities while Rokeya and her elder sister, Karimunnessa, were deprived of education. Despite colonial Bengal’s restrictions, Rokeya and her elder sister Karimunnessa were deeply interested in learning Bengali and English, which conflicted with their parents’ desires for them to learn Arabic and Farsi. Despite all of the prejudice prevalent during that time, Rokeya and Karimunnessa learned the languages they wanted to learn through their elder brother Ibrahim, who understood the importance of women’s education and held progressive ideas. He would learn everything at school, and teach them how to write at night while everyone was asleep, careful not to arouse suspicion. They would mark up letters of the alphabet on the floor to learn writing while Ibrahim would teach them how to read and write in English and Bengali. Her brother Ibrahim and her sister Karimunnessa had a deep influence on Rokeya’s life.

Rokeya was married off to Khan Bahadur Sakhawat Hussain, a revered deputy magistrate of Bhalgalpur, at the mere age of 16; they had a vast age difference of 22 years when they got married. Similarly, Karimunnessa married at the age of only 14. As a liberal and highly educated person, he encouraged Rokeya to continue learning Bengali and English. Her zeal for learning never faded, and having taken her husband’s advice, she began writing and adopted Bangla as the principal language for her literary works.

She started her literary journey in 1902 with a Bengali essay titled “Pipasha”. She later went on to publish “Motichur” (1905) and “Sultana’s Dream” (1908). In “Motichur”, which is a collection of essays, Rokeya begins with the essay Istrijatir Abanati (Women’s Downfall) to draw readers to discuss issues such as women’s inferior status in society. In the second half of the essay, titled Ardhangi (female-half), she discusses her opinion on the veil (purdah) and how women are deprived of opportunities. Her literary works used humor and satire to outline social malaises in colonial Bengal society regarding gender stereotypes. 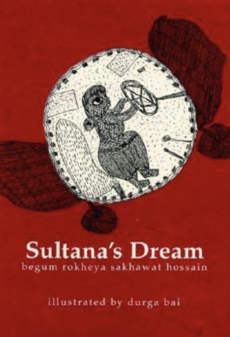 Her book Sultana’s Dream is the first of its kind— a feminist science fiction involving a utopian male/female role reversal. Free from the chains of oppression, women are free to think, innovate, and thrive. Ladyland, where the novel is set, is a place in which traditional gender roles are reversed, prompting audiences to consider the prospect of women succeeding outside the confines of the home, independent of pre-existing stigma. The evocative language paints Rokeya’s passion on a canvas for public display, aiding a demographic along its path towards progress and visibility while maintaining the integrity of the fictional storyline. She also went on to publish Sristi Tawtho (Theory of Creation), a short story describing the creation of both men and women, which challenges patriarchal themes through religion and gives a voice to Muslim women.

Inspired by Rokeya’s unabating hunger for education, her husband supported her by granting her a sum of money which she used to establish the Sakhawat Memorial Girls’ School, the first school for Muslim women in the region. Women’s education was beginning to be embraced in Bangladesh, along with the increased awareness, opportunity, and discussion by and for women surrounding their role in South Asian society. By 1930, the school educated women in ten different grades, and offerred classes in Arabic, English, Farsi, Urdu, and Bengali.

Rokeya also founded the Bengali Muslim Women’s Assocation served as a platform for increased female visibility and social progessivism. Often times, Rokeya made an effort to contact the homeless, victims of domestic violence, and the poor. Members congregated to discuss issues spanning from female employment to ways to financially lift widows. At the Bengal Women’s Education Conference in Calcutta, Rokeya criticized both Muslim men and women for not taking initiative in educating their daughters.

Begum Rokeya’s death on December 9th, 1932 in Calcutta did not mark the end of her legacy. Never one to sit idle at the expense of her sisters in womanhood, she was vocal and used her aristocratic status to an advantage, and thus, prompted the further exploration of feminist ideals in Southern Asia. Vociferous in the fight for equality, she remains a role model and inspiration through the ages, planting the seeds for an end to traditionalism and the birth of female liberation in the region.

Why Did I Choose to Research Begum Rokeya?

Being that I had found this research opportunity the same week that my family and I had celebrated Bengali New Year, I felt compelled to delve into my heritage. In spite of the clear variance, unmistakable difference, and plain contrast between individuals on the wide spectrum of conditions that lie on what is referred to as the world stage, the fight for gender equality remains a constant. I tend to focus on feminism in the western world; Begum Rokeya’s story of activism from the Asian subcontinent reminds me to remember the place from which I am from. -Sophia Chaudri

Born and raised in Bangladesh, I owe it to Begum Rokeya to end the stigma around women’s role in society and empower women through education. Without her contribution, women in this subcontinent would not have spearheaded into the feminist movement and progressed as much as they did. -Usraat Fahmidah