Sobekneferu ruled Egypt from 1806-1802 BC and was the first attested female pharaoh in its history. She used female pronouns but wore a combination of male and female garments to pacify those who believed a male ruler should be on the throne.

Sobekeneferu was born in the 19th century BC, although the exact date is unknown, to her father Pharaoh Amenemhet III. She had an older sister, Nefruptah, who may have been the intended successor to the Egyptian throne had she not died at a young age. There is also some debate as to whether Amenemhet IV was Sobekeneferu’s brother, half-brother, or husband. However, after his death, Sobekneferu ascended the Egyptian throne as the final ruler of the Twelfth Dynasty, concluding the prosperous Golden Age of the Middle Kingdom. 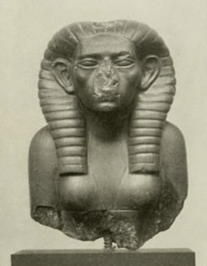 As pharaoh, Sobekeneferu carried the titles ‘Lord of the Two Lands’ and ‘High Priest of Every Temple,’ and was viewed as a god on Earth as well as a link between the gods and the Egyptian people. In life, a pharaoh is associated with Horus - the sun, sky, and war god - and in death, they are associated with Osiris - lord of the underworld, who would weigh the deads’ hearts on a golden scale against the white feather of Ma’at to decide where they would go in the afterlife. Only high-ranking priests and the pharaoh, a divine figure, could present offerings to statues of the gods the ancient Egyptians worshipped to honor and appease them. 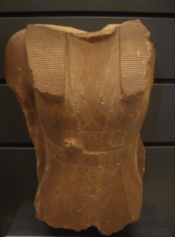 The Egyptian people had a difficult time accepting female leadership. Sobekeneferu employed female titles, making no attempt to portray herself as a man like many other female pharaohs did to solidify their rule. Namely, Pharaoh Hatshepsut ruled as a male; she wore a false beard and male headdress, was portrayed in sculptures with muscles and the body of a man, and posed with her legs spread apart to assert her authority as Pharaoh. In contrast, in a fragment of art discovered by archaeologists, Sobekneferu is shown wearing a sheath dress and male kit. In another piece, she is depicted in a cloak and strange crown, likely an attempt to combine both the headpieces of an Egyptian king and queen. Although she likely faced opposition to her rule on the basis of sex, Sobekeneferu proudly and defiantly ruled Egypt as a woman. She took on the traditionally male role of pharaoh but used female pronouns and dress, mixing the two binaries. 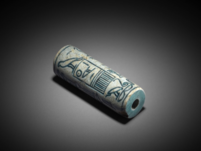 As a proponent of architecture, Sobekneferu made additions to the labyrinth at Amenemhet III’s funerary complex in Hawara, built structures at Heracleopolis Magna (a nome of ancient Upper Egypt), and created a religious center in Crocodilopolis named Shedet in honor of the crocodile god Sobek, her namesake. Sobek was revered by Egyptians as the god of fertility in agriculture as well as power and ferocity in battle.

Male rulers often tried to erase traces of a female pharaoh’s rule, crossing their names off of inscriptions and destroying statues, tombs, and monuments. Few monuments to Sobekneferu have been uncovered, but many statues of her, some of them headless, have been preserved. Famously, the base of a statue of a king’s royal daughter with Sobekneferu’s name was found in Gezer, Israel’s lost city. A bust displayed in the Egyptian Museum of Berlin, which was lost during World War II and later discovered at Semna, likely can be attributed to her. The piece bears the royal symbol for “unification of the two countries” on the side of her throne. In the British Museum, there is a fine cylinder seal bearing Sobekenefru’s name and royal titulary.

Sobekneferu’s tomb is yet to be positively identified, but there is speculation as to whether she was interred in a pyramid complex in Mazghuna north of a similar structure attributed to royal Amenemhat IV. Sobekneferu is alluded to in a papyrus scroll found at Harageh, and it is believed that this might be the name of the pyramid where she is buried.

In 1802 BC, Sobkneferu died without having any children, leaving no direct heirs to her throne. Her reign thus ended the Twelfth Dynasty and Golden Age of the Middle Kingdom, commencing Egypt’s less prosperous Thirteenth Dynasty.

Why Did I Choose to Research Sobekneferu?

I chose to research Sobekneferu because I am a quarter Egyptian and wanted to learn more about the powerful, underrepresented women of my heritage! Male rulers often tried to erase records of the female pharaohs who ruled Egypt, so I think it is especially important to share their stories.

Hatshepsut. (2019). HISTORY. Retrieved 22 May 2020, from https://www.history.com/topics/ancient-history/hatshepsut

Sebeknefru | queen of Egypt. (2012). Encyclopedia Britannica. Retrieved 22 May 2020, from https://www.britannica.com/biography/Sebeknefru