Chien-Shiung Wu lived in a time during which women were discouraged from pursuing an education. Despite this, she became extremely successful in her field of physics. She became known as the “First Lady of Physics” and “Queen of Nuclear Research.” 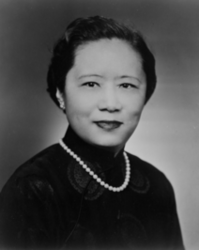 Wu was born on May 31st, 1912, in the small town of Taicang, China, in the Jiangsu province as the second child of three. Wu’s parents, Zhong-Yi and Fanhua Fan, worked as a teacher and an engineer, respectively. Growing up under the influence of her highly educated parents, Wu was encouraged to pursue studies in STEM (science, technology, engineering, and mathematics). Her dad founded the Mingde Women’s Vocational Continuing School, the first elementary school that allowed girls to attend in China. Wu attended this school, followed by an all-girls boarding school, a teaching program, and then a public school. In the pursuit of higher education, Wu attended Nanjing University, also known as National Central University, in China. This school was extremely prestigious and academically competitive, yet she still graduated at the top of her class with a Bachelor’s degree in physics in 1934. In fact, Chien-Shiung Wu had initially declared a major in mathematics but switched to physics because she was inspired by a faculty member who had worked with Marie Curie.

In 1936, Wu came to the United States after doing her first research experiment at the National Chekiang (Zhejiang) University in Hangzhou as a faculty member. She graduated from UC Berkeley with a Graduate & Doctoral degree in physics. During her time in graduate school, Wu met her soon-to-be husband, Luke Chia-Liu Yuan. She married him in 1942 and moved to the East Coast, where she taught at Smith College, and then she became the first female professor at Princeton University. She also had a son in 1947 named Vincent Wei-Chang Yuan, who later became a nuclear scientist as well. 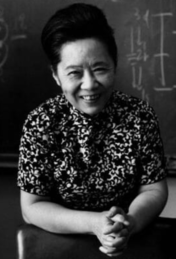 In 1944, Wu joined the Manhattan Project at Columbia University. Her knowledge of radiation detection & uranium physics helped her understand how to create a massive amount of uranium ore, which was used as fuel in the atomic bomb. She found out how uranium ore could be used as fuel in a bomb by turning uranium into isotopes with the process of diffusion. In addition to her discovery with uranium, Wu was recommended to work on solving an issue that occurred in the B Reactor at Hanford, the first large-scale nuclear reactor ever made, to shut down. She identified the element that caused the shutdown to occur. The cause was xenon-135 poisoning, which kept the reactor’s plutonium chain reaction from running. Her contribution to the famed Manhattan Project allowed the atomic bomb to be developed quicker, contributing to the controversial argument of how World War II was able to end sooner. Despite the moral ambiguity surrounding the usage of the atomic bomb, Chien-Shiung Wu guided valuable research about the capabilities of uranium.

After leaving the project in 1945, she became the lead researcher in the Department of Physics at Columbia with a focus on beta decay and weak interaction physics. In 1956, Wu was asked to lead research involving the law of conservation of parity, which states that when isolated systems of particles are together, they are mirrored and have conserved symmetry. Her research experiments with cobalt-60 isotopes generated proof that particle interactions within weak forces in beta decay are predominantly left-handed screwed. This evidence disproved the even distribution of particles that the law of parity stood by. Wu’s contributions were key to disproving the law of conservation of parity. However, her male colleagues, Tsung-Dao Lee and Chen Ning Yang ended up winning the Nobel Peace Prize in 1957 without crediting Chien-Shiung Wu. This is an issue that many non-male scientists faced, and is still an issue in the present day. 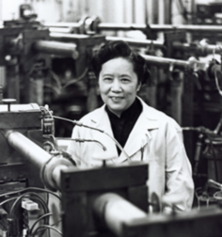 After retiring from Columbia University in 1981, Wu spent the rest of her time in programs with the People’s Republic of China, Taiwan, and the United States, in order to bring more women into science, technology, engineering, and/or mathematical careers. Wu’s experiences as a woman in science and physics highlighted injustices that women in STEM fields faced. Unfortunately, she died from complications due to a stroke on February 16th, 1997. One year later, she was inducted into the American National Women’s Hall of Fame. Chien-Shiung Wu left a legacy of key discoveries and is an inspiration to other women around the world by persevering through sexism whilst making scientific discoveries.

Why Did I Choose to Research Chien-Shiung Wu?